That is the conclusion of University at Buffalo researchers who conducted the first randomized, double-blind, placebo-controlled study of testosterone treatment in Type 2 diabetic men that comprehensively investigated the role of insulin resistance and inflammation, before and after treatment with testosterone.

The study, funded by the National Institutes of Health, was published online before print in Diabetes Care in November. 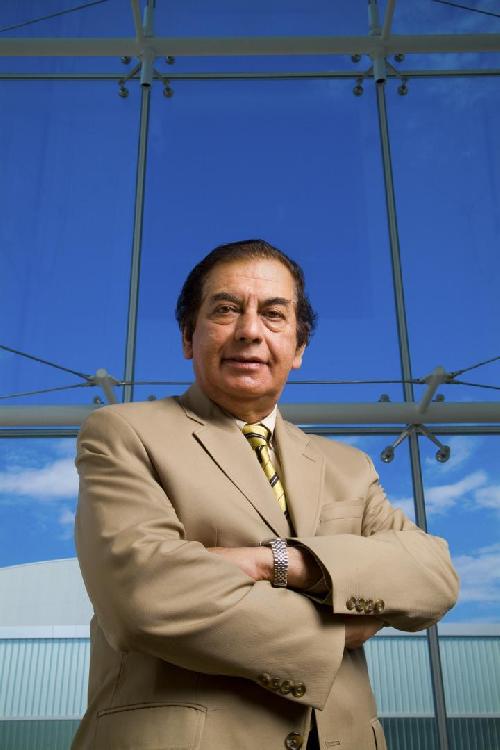 Dandona and his co-authors have been reporting on the relationship between insulin sensitivity and testosterone in Type 2 diabetic males since the publication of their seminal paper in 2004, demonstrating the association between low testosterone levels and Type 2 diabetes. Credit: Douglas Levere, University at Buffalo

"This is the first definitive evidence that testosterone is an insulin sensitizer and hence a metabolic hormone," said Paresh Dandona, MD, PhD, senior author on the paper and SUNY Distinguished Professor and chief of endocrinology, diabetes and metabolism in the Department of Medicine in the Jacobs School of Medicine and Biomedical Sciences at UB. He sees patients at UBMD Internal Medicine.

The UB researchers found that low testosterone levels were associated with significantly decreased insulin sensitivity; this was demonstrated by a 36 percent decrease in the rate at which glucose is taken up by tissues when patients with low testosterone were administered a set concentration of insulin.

"We hypothesized that testosterone may be an anti-inflammatory and insulin sensitizing agent since it has been known for some time that testosterone reduces adiposity and increases skeletal muscle," he said. "Our previous work has shown that obesity is associated with oxidative stress and inflammation, and inflammatory mediators are known to interfere with insulin signaling."

The current study included 94 men with Type 2 diabetes. Prior to being treated, the 44 men in the study with low testosterone levels expressed significantly lower levels of insulin signaling genes and, thus, diminished insulin sensitivity. These men were randomized to receive a testosterone injection or a placebo every week for 24 weeks.

The study found that while there was no change in body weight, testosterone treatment produced a reduction in total body fat of 3 kilograms (more than six pounds) while increasing muscle mass by the same amount.

"Most importantly, we saw a dramatic increase in insulin sensitivity, demonstrated by a 32 percent increase in the uptake of glucose by tissues in response to insulin," Dandona said. At the same time, there was a similar increase in the expression of the major genes that mediate insulin signaling.

While patients' hemoglobin A1C (HbA1c) levels did not go down, a necessary indicator that testosterone can help control diabetes, Dandona noted that fasting glucose levels had diminished significantly, by 12 milligrams per deciliter. He said that a significant improvement in HbA1c may eventually be seen when longer term studies are carried out.

The UB researchers are also interested in how testosterone treatment may impact insulin resistance and inflammation in specific patient populations, such as those with chronic renal failure and hypogonadism, which they reported on in a paper published online in June in the European Journal of Endocrinology. That paper reported that two-thirds of Type 2 diabetic men with chronic kidney disease have low testosterone levels and that among patients on dialysis, a remarkable 90 percent have low testosterone. Dandona was senior author on that paper with Sandeep Dhindsa, MD, previously a faculty member at the Jacobs School of Medicine and Biomedical Sciences and now at Texas Tech University Health Sciences Center.

Dandona and his colleagues also are interested in how obesity in young men affects testosterone levels, a topic they published on in 2012, when they found that obese teen boys have 50 percent less testosterone than their lean peers.