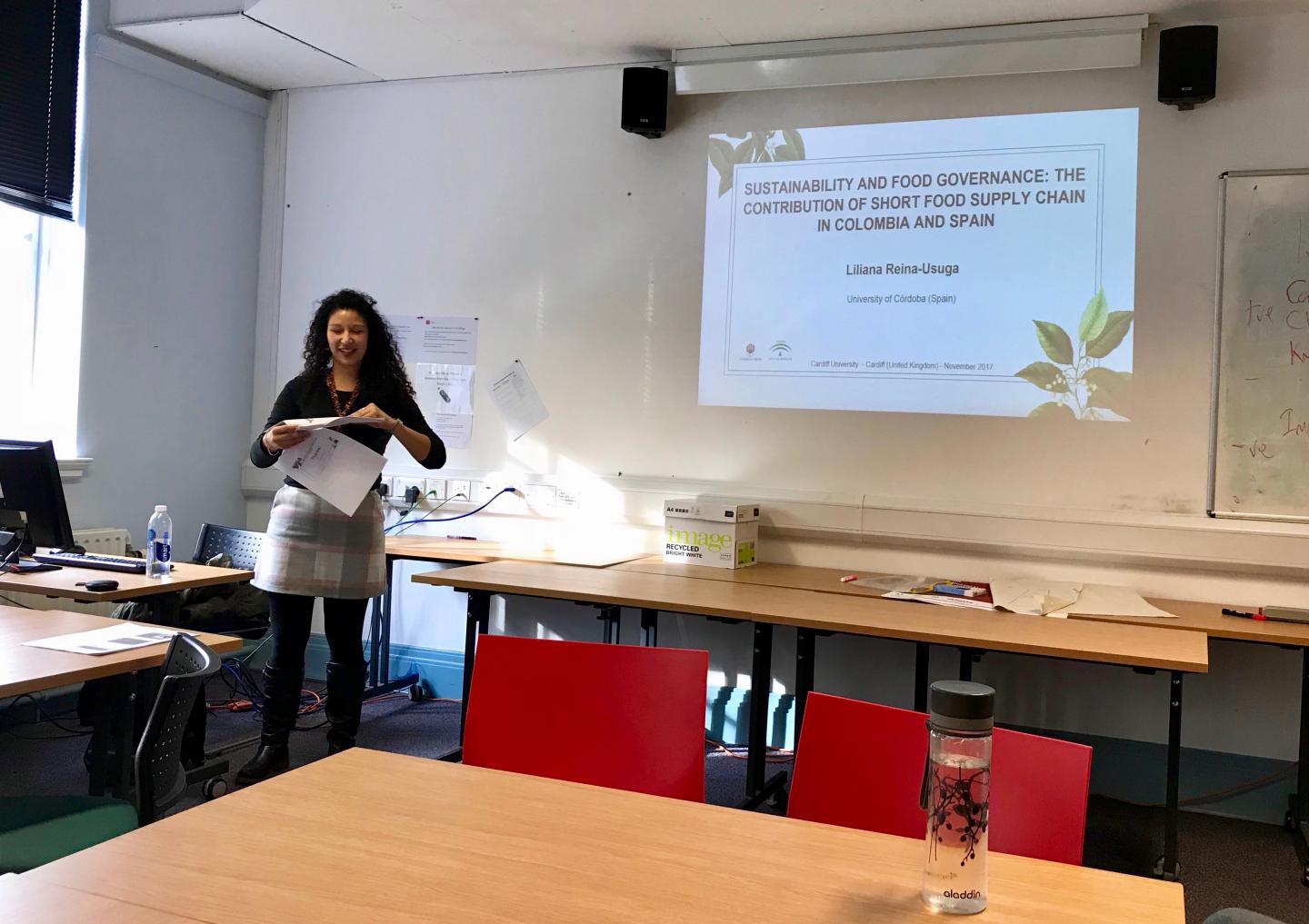 image: Liliana Reina dissemination her study in a meeting

In recent decades, alternative food supply movements have arisen. These are based on greater society involvement in coordinating and making decisions regarding food. These short food supply chains translate into producer markets, food co-ops and consumer groups in which a group of people organizes with producers in order to get supplies of necessary products.

Despite the fact that these systems usually have common elements running through them, such as the search for food sovereignty, nearby producers and local products and the assessment of good agricultural practices, the territorial factor molds the specific characteristics of each chain depending on the city or town where it is located.

Along these lines, a study led by University of Cordoba researcher Liliana Reina Usuga, in which College of Agricultural and Forestry Engineering Professor Tomás de Haro and Granada's Institute of Agricultural and Fisheries Research and Training researcher Carlos Parra-López also participated, analyzed the governance processes, as in the coordination mechanisms of the stakeholders within the territorial short food supply chains in Córdoba and Bogotá, two cities that have the same chains, but function differently due to each city's characteristics. Different population densities and distances in each city determine the way the collectives who participate in these supply chains are organized.

In search of governance processes, they first identified social narratives, the theory upon which these initiatives are created. By means of the Q method, which is a methodology that arose in psychology and is used to identify social narratives, they worked with different stakeholders: producers, NGOs, universities and public administration. Food activism, development aid, the view of these chains as a market niche, local self-management and social and environmental awareness were the five narratives shared by the players in these markets on both sides of the Atlantic, though some narratives were stronger than others depending on the city. While in Córdoba the food activism narrative was stronger, meaning that those who are in these kinds of movements are people who are committed to the environment and social justice, and are driven by this undertaking, in Bogotá there was a greater slant toward development aid, due to many of the chains there being fostered by NGOs and aid workers.

Once these narratives were identified, coordination mechanims were analyzed, such as decision-making (at an assembly or by consensus), setting prices of food and conflict resolution among the groups. According to these mechanisms, a network governance is set up, in which different stakeholders participate horizontally with low central power. In addition, reflexive governance is established, as these movements create spaces for dialog and collective action in order to question food conditions and to suggest alternatives.

With the fostering of reflexive governance and network governance in which society and chain stakeholders are involved, we are coming closer to more sustainable and democratic food systems, passing from the concept of food security (access to and availability of food) to that of food democracy (active participation in decisions on what kinds of food to produce and how to do so).

The public playing a stronger role in deciding about their nutrition and using local chains decreases people's vulnerability when facing food system crises.