CORVALLIS, Ore. -- Scientists have long been concerned that global warming may push Earth's climate system across a "tipping point," where rapid melting of ice and further warming may become irreversible -- a hotly debated scenario with an unclear picture of what this point of no return may look like.

A newly published study by researchers at Oregon State University probed the geologic past to understand mechanisms of abrupt climate change. The study pinpoints the emergence of synchronized climate variability in the North Pacific Ocean and the North Atlantic Ocean a few hundred years before the rapid warming that took place at the end of the last ice age about 15,000 years ago.

The study suggests that the combined warming of the two oceans may have provided the tipping point for abrupt warming and rapid melting of the northern ice sheets.

Results of the study, which was funded by the National Science Foundation, appear this week in Science.

This new discovery by OSU researchers resulted from an exhaustive 10-year examination of marine sediment cores recovered off southeast Alaska where geologic records of climate change provide an unusually detailed history of changing temperatures on a scale of decades to centuries over many thousands of years.

"Synchronization of two major ocean systems can amplify the transport of heat toward the polar regions and cause larger fluctuations in northern hemisphere climate," said Summer Praetorius, a doctoral student in marine geology at Oregon State and lead author on the Science paper. "This is consistent with theoretical predictions of what happens when Earth's climate reaches a tipping point."

"That doesn't necessarily mean that the same thing will happen in the future," she pointed out, "but we cannot rule out that possibility."

The study found that synchronization of the two regional systems began as climate was gradually warming. After synchronization, the researchers detected wild variability that amplified the changes and accelerated into an abrupt warming event of several degrees within a few decades. 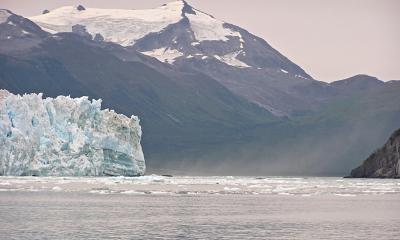 "As the systems become synchronized, they organized and reinforced each other, eventually running away like screeching feedback from a microphone," said Alan Mix, a professor in OSU's College of Earth, Ocean, and Atmospheric Sciences and co-author on the paper. "Suddenly you had the combined effects of two major oceans forcing the climate instead of one at a time."

"The example that we uncovered is a cause for concern because many people assume that climate change will be gradual and predictable," Mix added. "But the study shows that there can be vast climate swings over a period of decades to centuries. If such a thing happened in the future, it could challenges society's ability to cope."

What made this study unusual is that the researchers had such a detailed look at the geologic record. While modern climate observations can be made every day, the length of instrumental records is relatively short – typically less than a century. In contrast, paleoclimatic records extend far into the past and give good context for modern changes, the researchers say. However, the resolution of most paleo records is low, limited to looking at changes that occur over thousands of years.

In this study, the researchers examined sediment cores taken from the Gulf of Alaska in 2004 during an expedition led by Mix. The mountains in the region are eroding so fast that sedimentation rates are "phenomenal," he said. "Essentially, this rapid sedimentation provides a 'climate tape recorder' at extremely high fidelity."

Praetorius then led an effort to look at past temperatures by slicing the sediment into decade-long chunks spanning more than 8,000 years – a laborious process that took years to complete. She measured ratios of oxygen isotopes trapped in fossil shells of marine plankton called foraminifera. The isotopes record the temperature and salinity of the water where the plankton lived.

When the foraminifera died, their shells sank to the sea floor and were preserved in the sediments that eventually were recovered by Mix's coring team.

The researchers then compared their findings with data from the North Greenland Ice Core Project to see if the two distinct high-latitude climate systems were in any way related.

Most of the time, the two regions vary independently, but about 15,500 years ago, temperature changes started to line up and then both regions warmed abruptly by about five degrees (C) within just a few decades. Praetorius noted that much warmer ocean waters likely would have a profound effect on northern-hemisphere climates by melting sea ice, warming the atmosphere and destabilizing ice sheets over Canada and Europe.

A tipping point for climate change "may be crossed in an instant," Mix noted, "but the actual response of the Earth's system may play out over centuries or even thousands of years during a period of dynamic adjustment."

"Understanding those dynamics requires that we look at examples from the past," Mix said. "If we really do cross such a boundary in the future, we should probably take a long-term perspective and realize that change will become the new normal. It may be a wild ride."

Added Praetorius: "Our study does suggest that the synchronization of the two major ocean systems is a potential early warning system to begin looking for the tipping point."