Sympathy for the devil?

Montreal, May 30, 2011 — Misconceptions about the Church of Satan abound. For many people, anything with the word Satan is synonymous with evil, conjuring up images of gory offerings and babies bred for sacrifice. Nothing could be further from the truth, says Cimminnee Holt, a graduate student from Concordia University's Department of Religion, who has published a new study "Death and Dying in the Satanic Worldview," in the Journal of Religion & Culture.

Upsetting people's expectations was, no doubt, what founder Anton Szandor LaVey intended when he first announced the existence of the Church of Satan in 1966. A showman with an aggressive public persona, LaVey liked to shake up the status quo. And how best to trump convention than to adopt a name that suggests devil-worship but really means adversary in Hebrew?

Over the course of five years of research, Holt has learned much about what Satanists believe – and don't believe. More importantly perhaps, Holt uncovered a promising area in which to pursue her scholarship, one that has been largely undocumented. Holt has produced two undergraduate papers and a journal article on the Church of Satan. She is currently conducting preliminary research for her doctoral dissertation on the ethnography of Church of Satan adherents and on how these Satanists live their daily lives.

When some people learn the subject of her research, says Holt: "There's this immediate, alarm on their faces. I find that fascinating; that even in our secular society, where we tend to say we don't believe in the devil, even the mention of the word creates tension." 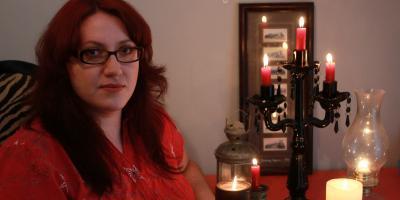 The Concordia graduate student discretely taps a rich vein of research in the Church of Satan that has largely remained an under-documented religion.

This alarm arises from the public's confusion between members of the Church of Satan and those theistic Satanists who do worship the devil. Fearing such misunderstandings, the Church of Satan has learned to shy away from exposure — unless orchestrated by the church itself. It refuses to reveal information about any of its members, many of whom are thought to hide their affiliation so prejudice won't interfere in their public lives and often highly successful careers.

"Individual members can decide for themselves whether or not to divulge their affiliation, but most choose not to go public for a variety of reasons," Holt says. "Openly divulging their affiliation could harm them."

Such a lack of transparency merely sharpened Holt's investigative skills. Through lengthy online forum discussions and email correspondence, Holt gained "a certain amount of trust from the church administrators."

Although her research into the Church of Satan allowed her access to two highly placed, though unnamed members. Their thoughtful answers form the basis of the paper.

Holt is fully aware her research to date has opened only "a very small window into this mostly reclusive new religious movement." Nonetheless, she has learned a great deal in the process about scholarship.

"A good idea means little unless you have gained the skill to support it with strong, critically sound arguments. My research on the Church of Satan has certainly gone through scrutiny, and will again, but the end result is very satisfying."