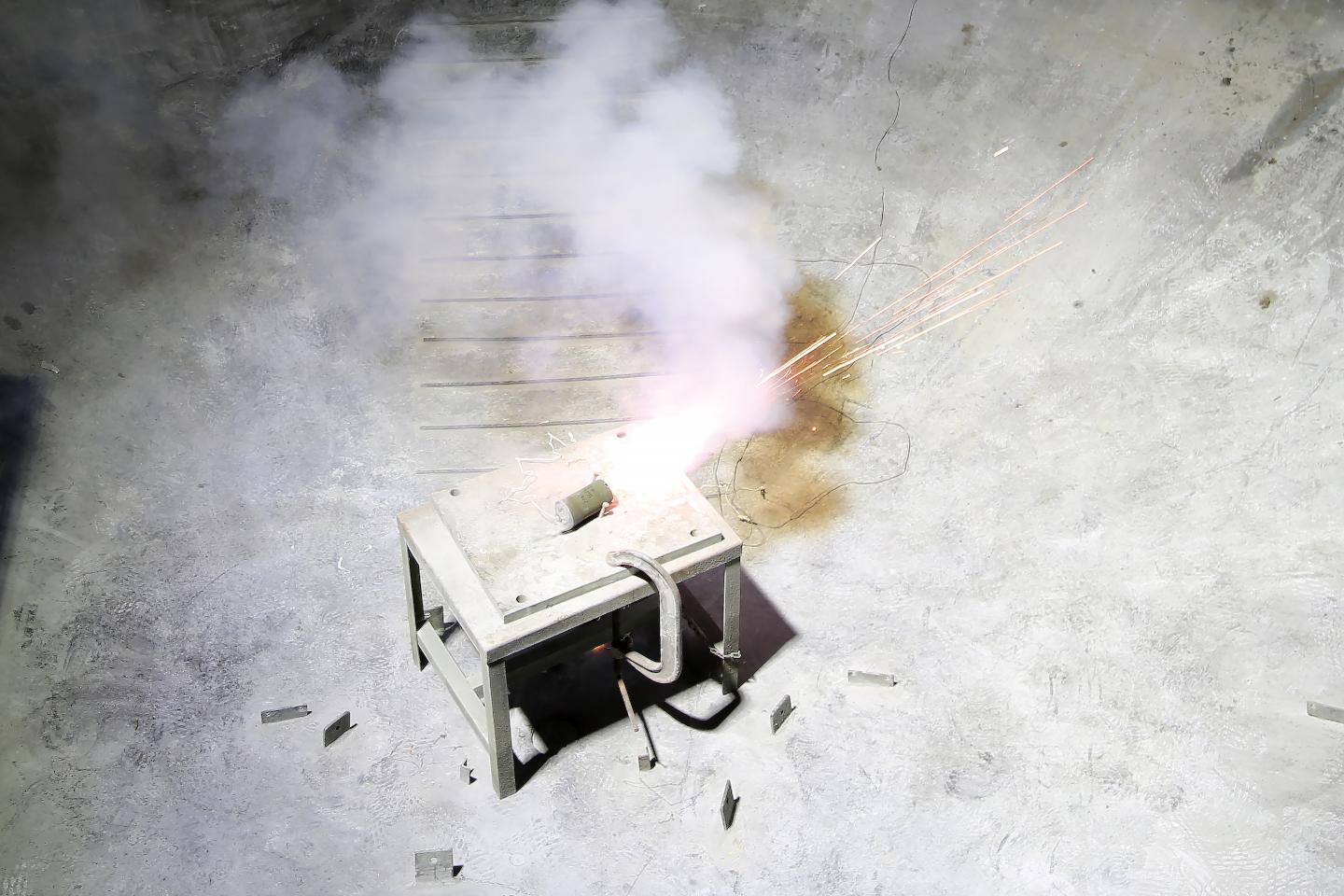 IMAGE: A new type of smoke grenade that can obscure sensors in the visible and infrared ranges burns during a test.

NEW ORLEANS, March 18, 2018 -- Setting off smoke bombs is more than good fun on the Fourth of July. The military uses smoke grenades in dangerous situations to provide cover for people and tanks on the move. But the smoke arms race is on. Increasingly, sensors can now go beyond the visible range into the infrared (IR) region of the spectrum. Today, researchers report developing a new kind of smoke that obscures both visible and IR detection.

The researchers will present their work today at the 255th National Meeting & Exposition of the American Chemical Society (ACS). ACS, the world's largest scientific society, is holding the meeting here through Thursday. It features more than 13,000 presentations on a wide range of science topics.

"Because of the advancement of sensors beyond the visible region, we need new, high-performing obscurants in the infrared region," Zach Zander says. "Each obscurant can absorb or scatter light at a given frequency. Most of the smokes that we use do well in either the visible or IR range. The objective of this program is to create what we call a bispectral obscurant, which works to block visible, as well as infrared detection."

To build a better puff of smoke, Zander and his colleagues in the Smoke & Obscurants, Pyrotechnics, and Chemical Biological Filtration Branches started thinking about using a metal organic framework (MOF). Other scientists working at his institute, the U.S. Army's Edgewood Chemical Biological Center, have been studying these stable porous structures, and were working with one called UiO-66 that was made up of terephthalic acid, a known visible obscurant.

"The traditional army smoke grenade is made with a toxic material, called hexachloroethane, but terephthalic acid grenades are emerging as a safer alternative," says Zander. The rest of UiO-66 consists of large pores and a zirconium node that researchers proposed could absorb in the IR range. The question was whether UiO-66 would burn in such a way as to liberate the terephthalic acid from the framework, creating a smoke with both an IR-absorbing agent and a visible light obscurant. If the UiO-66 molecule didn't break apart, the terephthalic acid wouldn't be free to block the visible light.

In a proof-of-principle experiment, the researchers packed UiO-66 into a grenade along with the pyrotechnic agents that generate the burn. They placed it in a 249-cubic-yard chamber lined with sensors and set off the smoke grenade.

"We monitored visible and IR wavelengths," Zander says. "We got some blockage in the visible range, though it wasn't as good as a true terephthalic acid grenade. We think we can improve our performance by changing the recipe of the pyrotechnic portion and thereby better liberate the terephthalic acid from the framework."

In the long term, the researchers plan to continue incorporating additional obscurants to the smoke, creating a kind of "Swiss army knife" of smoke grenades. "Ideally, we'd like one smoke device that hits multiple spectra, rather than multiple devices to hit each spectrum individually," Zander says. "The reason this is so important to the army is that you want to minimize the amount of stuff a soldier has to carry. One grenade is definitely easier to haul than five."