Sunsets On Other Habitable Worlds 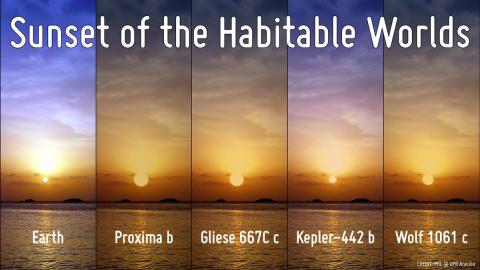 Simulated comparison of a sunset on Earth with that of four known potentially habitable worlds. The sunset from the planets with red-dwarf stars (Proxima b, Gliese 667C c, and Wolf 1061 c) appear darker, but with a bigger star than those with K-stars (Kepler-442 b) or sun-like stars. Red-dwarf stars appear bigger in the sky than sun-like stars, even though they are smaller, because they are cooler and the planets have to be closer to them to maintain temperate conditions. The original photo of the beach was taken at Playa Puerto Nuevo in Vega Baja, Puerto Rico. Credit: PHL @ UPR Arecibo.

Researchers from the Pale Red Dot campaign have found evidence of a potentially habitable world orbiting the closest star to Earth, Proxima Centauri, a cool red-dwarf slightly older than the Sun (1). The planet, named Proxima b, has a minimum mass of 1.3 times that of Earth and orbits its parent star every 11.2 days, receiving about 70% the energy Earth receives from the Sun.

A potentially habitable world is defined as one that might support liquid water on its surface. That means it must orbit a star within a range like ours, a "habitable zone". Obviously we Though currently we cannot tell exactly how habitable such planets are because we can not investigate their geologic or atmospheric composition, it is believed that small planets located in the habitable zone, just like Earth and now Proxima b, would be more likely to have the right conditions for life as we know it.

Proxima b was added to the Habitable Exoplanets Catalog (HEC) (2) as one of the best objects of interest for the search for life in the universe. The planet orbits well within the conservative habitable zone of Proxima Centauri. Additionally, Proxima b is now not only the closest potentially habitable planet to Earth (4.2 light years away), but it is also the most similar to Earth (ESI = 0.87) (3), with respect to Earth’s mass and insolation.

Other factors, though, make Proxima b quite different from Earth. It is probably tidally-locked, always giving the same face to its star. The illuminated side might be too hot, while the dark side too cold for liquid water or life. A thick atmosphere or a large ocean, though, could regulate the temperatures across the planet, but we do not know if this is the case (4).

Probably the most detrimental factor for the habitability of Proxima b is the activity of its parent star, which produces strong magnetic fields, flares, and high UV and X-ray fluxes as most red-dwarf stars do. These factors may lead to the atmospheric and water loss of the planet, but would not necessarily preclude habitable conditions (5), (6), (7). Should Proxima b have a magnetic field, much like Earth does, it would potentially be shielded from such devastating forces. The mass of Proxima b suggests a rocky composition, but we do not know its radius to evaluate its bulk density (8). The planet could be between 0.8 to 1.4 Earth radii depending on composition (9) and if rocky should be about 10% larger than Earth. However, Proxima b could be larger given that we only know its minimum mass.

Statistically, it is not expected to have a potentially habitable world so close to Earth due to their expected low occurrence in the galaxy. It is estimated that 24% of red-dwarf stars have an Earth-sized planet (1 to 1.5 RE) in the optimistic habitable zone (10). This corresponds to an average separation of eight light years between them in the Solar Neighborhood (248 red-dwarfs within 10 parsecs) (11). Therefore, the probability of having a potentially habitable world orbiting our nearest star is less than 10%. Either Proxima b was a lucky find or these worlds are more common than previously thought.

The most exciting aspect of this discovery is that Proxima b is relatively close enough to Earth for detailed studies in the next years by current and future observatories. Other known potentially habitable worlds, especially those from the NASA Kepler primary mission, are too far away to get any information about their atmosphere or composition with current technology. Projects like StarShot are even considering the possibility of reaching the stars with miniaturized space probes, but this exciting approach might take many decades. Proxima b is an excellent object for future characterization via transit or direct imaging in search for biosignatures (12). There is a 1.5% chance that Proxima b transits its parent star (13). Such transits will take 53 minutes as seen from Earth and will produce a notable 0.5% decrease on the brightness of Proxima Centauri (14). Direct imaging in the next decades might even provide information about the surface and weather of Proxima b. (15)

In any case, Proxima b is now one of the prime targets to understand the extension of our habitable universe in years to come. Red-dwarf stars are the most common star in our galaxy, comprising about 75% of the stars. If we find out that planets around red-dwarf stars, such as Proxima b, are in fact not habitable then the ‘real estate’ for life in the universe will be instead very small. The answer lies 4.2 light years away waiting for us.

(2) The Habitable Exoplanets Catalog (HEC) tracks since 2011 all potentially habitable worlds discovered by all ground and space telescopes around the world. The HEC is an initiative of the Planetary Habitability Laboratory (PHL) of the University of Puerto Rico at Arecibo (UPR Arecibo).

(3) The Earth Similarity Index (ESI) is a measure of Earth-likeness from zero (no similarity) to one (identical to Earth) given some known planetary properties. For exoplanets the ESI is based on stellar flux and either the mass or radius of the planets. Since habitability depends on many other factors it is not known if planets with similar mass and stellar flux to Earth (i.e., ESI values closer to one) are also in general more habitable.

Note: The PHL @ UPR Arecibo created an independent assessment, and produced multimedia content for ESO and the general public as part of the announcement of the Proxima b discovery. We acknowledge the collaboration of Guillem Anglada-Escudé from Queen Mary University of London (lead scientist of the discovery), the ESO Public Information Office, Edgard Rivera-Valentín from the Arecibo Observatory (USRA), the computational resources of the HPCf of the University of Puerto Rico, the University of Puerto Rico at Arecibo, and the music of Lyford Rome.