Sunlight, not microbes, key to CO2 in Arctic

CORVALLIS, Ore. – The vast reservoir of carbon stored in Arctic permafrost is gradually being converted to carbon dioxide (CO2) after entering the freshwater system in a process thought to be controlled largely by microbial activity.

However, a new study – funded by the National Science Foundation and published this week in the journal Science – concludes that sunlight and not bacteria is the key to triggering the production of CO2 from material released by Arctic soils.

The finding is particularly important, scientists say, because climate change could affect when and how permafrost is thawed, which begins the process of converting the organic carbon into CO2.

"Arctic permafrost contains about half of all the organic carbon trapped in soil on the entire Earth – and equals an amount twice of that in the atmosphere," said Byron Crump, an Oregon State University microbial ecologist and co-author on the Science study. "This represents a major change in thinking about how the carbon cycle works in the Arctic."

Converting soil carbon to carbon dioxide is a two-step process, notes Rose Cory, an assistant professor of earth and environmental sciences at the University of Michigan, and lead author on the study. First, the permafrost soil has to thaw and then bacteria must turn the carbon into greenhouse gases – carbon dioxide or methane. While much of this conversion process takes place in the soil, a large amount of carbon is washed out of the soils and into rivers and lakes, she said.

"It turns out, that in Arctic rivers and lakes, sunlight is faster than bacteria at turning organic carbon into CO2," Cory said. "This new understanding is really critical because if we want to get the right answer about how the warming Arctic may feedback to influence the rest of the world, we have to understand the controls on carbon cycling.

"In other words, if we only consider what the bacteria are doing, we'll get the wrong answer about how much CO2 may eventually be released from Arctic soils," Cory added.

The research team measured the speed at which both bacteria and sunlight converted dissolved organic carbon into carbon dioxide in all types of rivers and lakes in the Alaskan Arctic, from glacial-fed rivers draining the Brooks Range to tannin-stained lakes on the coastal plain. Measuring these processes is important, the scientists noted, because bacteria types and activities are variable and the amount of sunlight that reaches the carbon sources can differ by body of water. 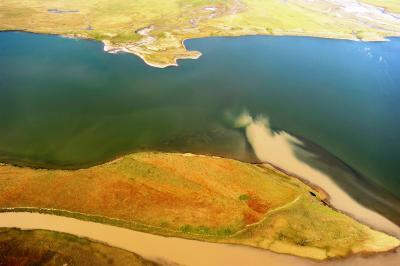 Terrestrial organic matter is shown spilling into a lake.

In virtually all of the freshwater systems they measured, however, sunlight was always faster than bacteria at converting the organic carbon into CO2.

"This is because most of the fresh water in the Arctic is shallow, meaning sunlight can reach the bottom of any river – and most lakes – so that no dissolved organic carbon is kept in the dark," said Crump, an associate professor in Oregon State's College of Earth, Ocean, and Atmospheric Sciences. "Also, there is little shading of rivers and lakes in the Arctic because there are no trees."

Another factor limiting the microbial contribution is that bacteria grow more slowly in these cold, nutrient-rich waters.

"Light, therefore, can have a tremendous effect on organic matter," University of Michigan's Cory pointed out.

The source of all of this organic carbon is primarily tundra plants – and it has been building up for hundreds of thousands of years, but doesn't completely break down immediately because of the Arctic's cold temperatures. Once the plant material gets deep enough into the soil, the degradation stops and it becomes preserved, much like peat.

"The level of thawing only gets to be a foot deep or so, even in the summer," Crump said. "Right now, the thaw begins not long before the summer solstice. If the seasons begin to shift with climate change – and the thaw begins earlier, exposing the organic carbon from permafrost to more sunlight – it could potentially trigger the release of more CO2."

The science community has not yet been able to accurately calculate how much organic carbon from the permafrost is being converted into CO2, and thus it will be difficult to monitor potential changes because of climate change, they acknowledge.

"We have to assume that as more material thaws and enters Arctic lakes and rivers, more will be converted to CO2," Crump said. "The challenge is how to quantify that."

Some of the data for the study was made available through the National Science Foundation's Arctic Long-Term Ecological Research project, which has operated in the Arctic for nearly 30 years.