CHAMPAIGN, Ill. -- A new study offers the first atomic-scale view of an interaction between the HIV capsid - the protein coat that shepherds HIV into the nucleus of human cells - and a host protein known as cyclophilin A. This interaction is key to HIV infection, researchers say.

A paper describing the research appears in the journal Nature Communications.

Cyclophilin A is found in most tissues of the human body, where it plays a role in the inflammatory response, immunity and the folding and trafficking of other proteins. When it fails to work properly or is overproduced in cells, cyclophilin A also can contribute to diseases such as rheumatoid arthritis, asthma, cancer and cardiovascular disease. It also facilitates some viral infections, including HIV. 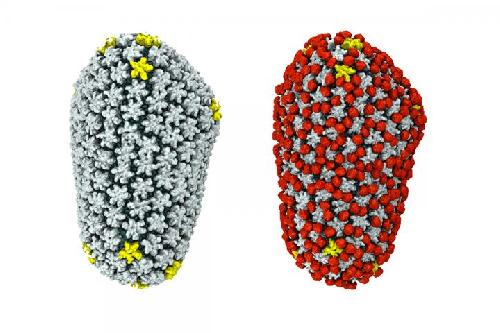 The naked HIV capsid, left, would be quickly detected and eliminated from the cell, but a host protein, cyclophilin A, in red in the image on the right, binds to the capsid and enables it to transit through the cell undetected. Credit: Graphic by Juan Perilla

The HIV capsid somehow tricks this cellular protein into providing cover for it as it transits through the cell and makes its way to the nucleus, Schulten said. Once there, the capsid interacts with a nuclear pore that offers an entrance to the cell's nucleus. The virus uses the pore as a channel to inject its genetic material into the nucleus and commandeer the cell.

Studies in cell culture have found that the virus rarely makes it to the nucleus without its cyclophilin disguise. Drugs that interfere with cyclophilin also reduce HIV infections in cell culture. Such drugs cannot be used in human HIV patients because they dampen the immune response.

In the new study, the researchers used a massive computer model of the HIV capsid, which they developed in a 2013 study. Building this model meant simulating the interactions of 64 million atoms, a feat that required the use of Blue Waters, a petascale supercomputer at the National Center for Supercomputing Applications at the U. of I.

For the new study, the team used Blue Waters as well as the Titan supercomputer at Oak Ridge National Laboratory to simulate the interactions between cyclophilin A and the HIV capsid. The 3-D structure of cyclophilin A was known from previous investigations.

The simulations revealed that cyclophilin A binds to the capsid in two ways. First, there is the "classic" binding site, one revealed decades earlier in crystallography studies. But in some places, a single cyclophilin A protein also bound the capsid at a second site, forming a bridge between two hexamers. (The HIV capsid is made up of a lattice of protein hexamers and pentamers.) Cyclophilin's bridging behavior occurred only in highly curved regions of the capsid, the researchers found.

Further research with NMR spectroscopy, which can detect unique chemical interactions, corroborated the existence of a second binding site.

By varying the amount of cyclophilin A added to the HIV capsid in their simulations, the researchers also saw that cyclophilin did not completely coat the HIV capsid. At high concentrations, individual cyclophilin molecules attached to the capsid interfered with others, disrupting their ability to bind.

Laboratory experiments also showed that having too little or too much cyclophilin A interfered with the virus's ability to infect cells.

"What we think is happening is, where there is no cyclophilin the capsid is naked, so the cell can recognize it and trigger a process that destroys the virus," Perilla said. "But if the capsid is fully occupied by cyclophilin A, it prevents recognition by the nuclear pore complex. So there is an optimal amount of cyclophilin bound to the capsid such that it allows the HIV infection to go forward."

"The HIV capsid has to show some of its surface to the nuclear pore complex so that it docks there properly and can inject its genetic material into the nucleus," Schulten said. "Now, we understand a little bit better the HIV virus' strategy for evading cellular defenses. That gives insight into battling the system."

source: University of Illinois at Urbana-Champaign