In what is believed to be the first study of its kind, researchers used genomic techniques to document the presence of significant numbers of living microorganisms – principally bacteria – in the middle and upper troposphere, that section of the atmosphere approximately four to six miles above the Earth's surface.

Whether the microorganisms routinely inhabit this portion of the atmosphere – perhaps living on carbon compounds also found there – or whether they were simply lofted there from the Earth's surface isn't yet known. The finding is of interest to atmospheric scientists, because the microorganisms could play a role in forming ice that may impact weather and climate. Long-distance transport of the bacteria could also be of interest for disease transmission models.

The microorganisms were documented in air samples taken as part of NASA's Genesis and Rapid Intensification Processes (GRIP) program to study low- and high-altitude air masses associated with tropical storms. The sampling was done from a DC-8 aircraft over both land and ocean, including the Caribbean Sea and portions of the Atlantic Ocean. The sampling took place before, during and after two major tropical hurricanes – Earl and Karl – in 2010.

The research, which has been supported by NASA and the National Science Foundation, was scheduled to be published online January 28th by the journal Proceedings of the National Academy of Sciences.

"We did not expect to find so many microorganisms in the troposphere, which is considered a difficult environment for life," said Kostas Konstantinidis, an assistant professor in the School of Civil and Environmental Engineering at the Georgia Institute of Technology. "There seems to be quite a diversity of species, but not all bacteria make it into the upper troposphere." 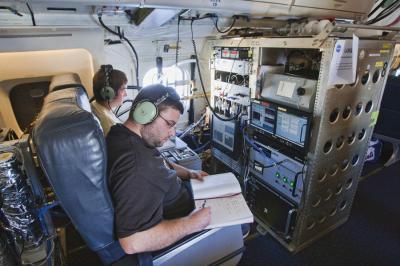 Terry Lathem, a graduate student in Georgia Tech's School of Earth and Atmospheric Sciences, takes notes aboard a NASA DC-8 gathering samples of microorganisms in the atmosphere.

Aboard the aircraft, a filter system designed by the research team collected particles – including the microorganisms – from outside air entering the aircraft's sampling probes. The filters were analyzed using genomic techniques including polymerase chain reaction (PCR) and gene sequencing, which allowed the researchers to detect the microorganisms and estimate their quantities without using conventional cell-culture techniques.

When the air masses studied originated over the ocean, the sampling found mostly marine bacteria. Air masses that originated over land had mostly terrestrial bacteria. The researchers also saw strong evidence that the hurricanes had a significant impact on the distribution and dynamics of microorganism populations.

The study showed that viable bacterial cells represented, on average, around 20 percent of the total particles detected in the size range of 0.25 to 1 microns in diameter. By at least one order of magnitude, bacteria outnumbered fungi in the samples, and the researchers detected 17 different bacteria taxa – including some that are capable of metabolizing the carbon compounds that are ubiquitous in the atmosphere – such as oxalic acid.

The microorganisms could have a previously-unidentified impact on cloud formation by supplementing (or replacing) the abiotic particles that normally serve as nuclei for forming ice crystals, said Athanasios Nenes, a professor in the Georgia Tech School of Earth and Atmospheric Sciences and School of Chemical and Biomolecular Engineering.

"In the absence of dust or other materials that could provide a good nucleus for ice formation, just having a small number of these microorganisms around could facilitate the formation of ice at these altitudes and attract surrounding moisture," Nenes said. "If they are the right size for forming ice, they could affect the clouds around them."

The microorganisms likely reach the troposphere through the same processes that launch dust and sea salt skyward. "When sea spray is generated, it can carry bacteria because there are a lot of bacteria and organic materials on the surface of the ocean," Nenes said. 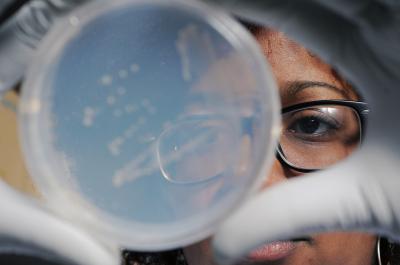 The research brought together microbiologists, atmospheric modelers and environmental researchers using the latest technologies for studying DNA. For the future, the researchers would like to know if certain types of bacteria are more suited than others for surviving at these altitudes. The researchers also want to understand the role played by the microorganisms – and determine whether or not they are carrying on metabolic functions in the troposphere.

"For these organisms, perhaps, the conditions may not be that harsh," said Konstantinidis. "I wouldn't be surprised if there is active life and growth in clouds, but this is something we cannot say for sure now."

Other researchers have gathered biological samples from atop mountains or from snow samples, but gathering biological material from a jet aircraft required a novel experimental setup. The researchers also had to optimize protocols for extracting DNA from levels of biomass far lower than what they typically study in soils or lakes.

"We have demonstrated that our technique works, and that we can get some interesting information," Nenes said. "A big fraction of the atmospheric particles that traditionally would have been expected to be dust or sea salt may actually be bacteria. At this point we are just seeing what's up there, so this is just the beginning of what we hope to do." 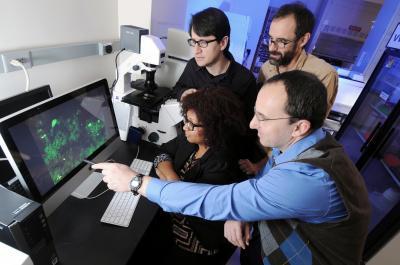