Study: Death by moonlight? Not always

Is moonlight dangerous? It depends on what you are, according to a study published online recently in the Journal of Animal Ecology.

"Ecologists have long viewed the darkness of a moonless night as a protective blanket for nocturnal prey species," said Laura Prugh, a wildlife biologist at the University of Alaska Fairbanks.

In the dark, creatures of the night can go about their business in relative safety from lurking predators. Moonlight, according to this logic, helps predators find their prey and is risky if you are a prey species trying not to get eaten.

That's not always so, says Prugh, a researcher with the UAF Institute of Arctic Biology, and colleague Christopher Golden of Harvard University.

"The theory that moonlight increases predation risk ignores the fact that prey animals also have eyes, and they often use them to detect predators," said Prugh. If moonlight helps predators to find prey, it could also help prey species to detect approaching predators. 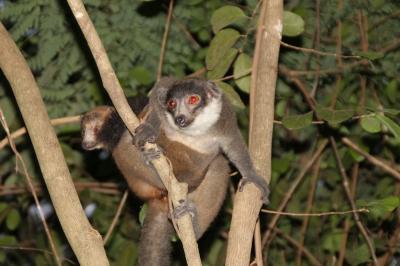 This is a collared brown lemur (Eulemur fuvius collaris).

The researchers found that species ranged widely in their affinity for moonlight, from the moon-loving or lunar-philic lemurs of Madagascar to the lunar-phobic kangaroo rats in the southwestern United States. And, responses to moonlight were related to the sensory systems of species rather than their positions in the food chain.

Prey animals that use vision as their main sensory system, such as primates, were generally more active on bright nights. Prey species that rely mainly on senses like smell or echolocation, such as many rodents and bats, were generally less active. And contrary to expectations, predators such as African lions were less active on moonlit nights.

"Moonlight is indeed risky for some prey species, but only those that use vision as a backup system rather than their first line of defense," said Prugh. "Our synthesis shows that moonlight can benefit visually oriented prey." And as for those lurking predators, the moon may often hurt rather than help their chances of catching prey.

This study is the first to examine moonlight effects across a diverse assemblage of species. Nearly half of all mammals are nocturnal, experiencing lunar cycles that cause light levels to change by three orders of magnitude every month.

"Our results suggest that moonlight alters predator-prey relations in more complex ways than previously thought," said Prugh, who added that she hopes this study will stimulate further research.

"Do lunar cycles affect population growth rates? How do artificial lights affect the hunting success and vulnerability of nocturnal species? These are important questions that we do not currently have answers to," Prugh said. 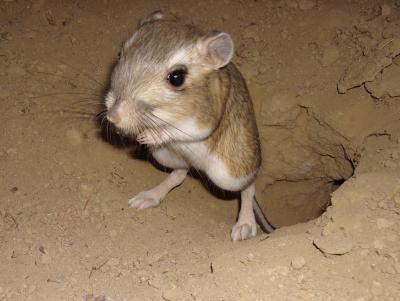 This is a giant kangaroo rat.