Researchers from the Cancer Science Institute of Singapore (CSI Singapore) at the National University of Singapore (NUS) have delineated novel molecular interactions affecting the activity of the TGF-β pathway, a key cancer pathway in humans affecting cancer progression.

In certain settings, the TGF-β pathway can act as an oncogene, enhancing cancer progression in humans. The activation of this pathway can increase the growth of tumors by promoting cell invasion, activating cancer stem cells, and in some cases, promoting the spread of cancer. In recent years, a number of deubiquitinating enzymes have been shown to regulate the TGF-β pathway and may potentially be considered as a new class of drug targets. Studies have shown that the deubiquitinating enzyme USP15 is elevated in glioblastoma, a highly invasive tumor in the brain, as well as breast and ovarian cancers, leading to the over-activation of the TGF-β pathway and increasing cancer risks.

A recent study conducted by Dr Pieter Eichhorn and Dr Prasanna Iyengar from CSI Singapore revealed that the activation of the TGF-β pathway could be influenced by the interactions between USP15 and SMURF2 - enzymes generally involved in degradation of proteins in cells. 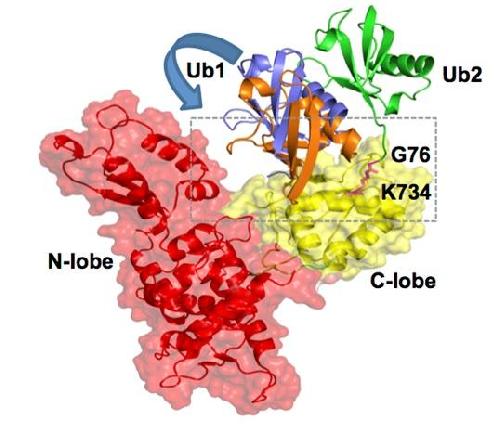 Molecular model showing the novel proposed mechanism for the activation of SMURF2. The C-lobe (in yellow) of the SMURF2 protein interacts with an ubiquitin molecule (in green), which was transferred to SMURF2 by USP15. Credit: National University of Singapore

"While existing studies have found a number of deubiquitinating enzymes that stabilise the TGF-β receptor, leading to the activation of the TGF-β pathway, the mechanism has not been well studied. Our research found that USP15 could regulate the ability of SMURF2 to add ubiquitin molecules to its targets, resulting in enhanced stability of the TGF-β receptor and downstream pathway activation. Hence, the results of this study point to USP15 as a potential novel therapeutic target for the treatment of cancers with TGF-β hyperactivation," said Dr Eichhorn.

The findings of the research study were published online in Scientific Reports, a journal by Nature Publishing Group, in October 2015.