A study in mice shows how a breakdown of the brain's blood vessels may amplify or cause problems associated with Alzheimer's disease. The results published in Nature Communications suggest that blood vessel cells called pericytes may provide novel targets for treatments and diagnoses.

Alzheimer's disease is the leading cause of dementia. It is an age-related disease that gradually erodes a person's memory, thinking, and ability to perform everyday tasks. Brains from Alzheimer's patients typically have abnormally high levels of plaques made up of accumulations of beta-amyloid protein next to brain cells, tau protein that clumps together to form neurofibrillary tangles inside neurons, and extensive neuron loss.

Vascular dementias, the second leading cause of dementia, are a diverse group of brain disorders caused by a range of blood vessel problems. Brains from Alzheimer's patients often show evidence of vascular disease, including ischemic stroke, small hemorrhages, and diffuse white matter disease, plus a buildup of beta-amyloid protein in vessel walls. Furthermore, previous studies suggest that APOE4, a genetic risk factor for Alzheimer's disease, is linked to brain blood vessel health and integrity.

"This study may provide a better understanding of the overlap between Alzheimer's disease and vascular dementia," said Roderick Corriveau, Ph.D., a program director at NINDS.

One hypothesis about Alzheimer's disease states that increases in beta-amyloid lead to nerve cell damage in the brain. This is supported by genetic studies that link familial forms of the disease to mutations in amyloid precursor protein (APP), the larger protein from which plaque-forming beta-amyloid molecules are derived. Nonetheless, previous studies on mice showed that increased beta-amyloid levels reproduce some of the problems associated with Alzheimer's. The animals have memory problems, beta-amyloid plaques in the brain and vascular damage but none of the neurofibrillary tangles and neuron loss that are hallmarks of the disease.

In this study, the researchers show that pericytes may be a key to whether increased beta-amyloid leads to tangles and neuron loss. 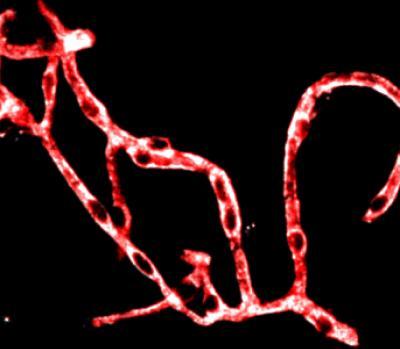 (Photo Credit: Courtesy of Zlokovic lab, Zilkha Neurogenetic Institute of the Keck School of Medicine at the University of Southern California.)

Pericytes are cells that surround the outside of blood vessels. Many are found in a brain plumbing system called the blood-brain barrier. It is a network that exquisitely controls the movement of cells and molecules between the blood and the interstitial fluid that surrounds the brain's nerve cells. Pericytes work with other blood-brain barrier cells to transport nutrients and waste molecules between the blood and the interstitial brain fluid.

To study how pericytes influence Alzheimer's disease, Dr. Zlokovic and his colleagues crossbred mice genetically engineered to have a form of APP linked to familial Alzheimer's with ones that have reduced levels of platelet-derived growth factor beta receptor (PDGFR-beta), a protein known to control pericyte growth and survival. Previous studies showed that PDGFR-beta mutant mice have fewer pericytes than normal, decreased brain blood flow, and damage to the blood-brain barrier.

"Pericytes act like the gatekeepers of the blood-brain barrier," said Dr. Zlokovic.

Both the APP and PDGFR-beta mutant mice had problems with learning and memory. Crossbreeding the mice slightly enhanced these problems. The mice also had increased beta-amyloid plaque deposition near brain cells and along brain blood vessels. Surprisingly, the brains of the crossbred mice had enhanced neuronal cell death and extensive neurofibrillary tangles in the hippocampus and cerebral cortex, regions that are typically affected during Alzheimer's.

"Our results suggest that damage to the vascular system may be a critical step in the development of full-blown Alzheimer's disease pathology," said Dr. Zlokovic.

Further experiments suggested that pericytes may transport beta-amyloid across the blood-brain barrier into the blood and showed that crossbreeding the mice slowed the rate at which beta-amyloid was cleared away from nerve cells in the brain.

Dr. Zlokovic and his colleagues concluded that their results support a two-hit vascular hypothesis of Alzheimer's. The hypothesis states that the toxic effects of increased beta-amyloid deposition on pericytes in aged blood vessels leads to a breakdown of the blood-brain barrier and a reduced ability to clear amyloid from the brain. In turn, the progressive accumulation of beta-amyloid in the brain and death of pericytes may become a damaging feedback loop that causes dementia. If true, then pericytes and other blood-brain barrier cells may be new therapeutic targets for treating Alzheimer's disease.