CHAMPAIGN, Ill. — It is better to give than to receive – at least if you're an adolescent and you enjoy giving, a new study suggests.

The study found that 15- and 16-year-olds who find pleasure in pro-social activities, such as giving their money to family members, are less likely to become depressed than those who get a bigger thrill from taking risks or keeping the money for themselves.

The researchers detail their findings in the Proceedings of the National Academy of Sciences.

The study focused on the ventral striatum, a brain region that regulates feelings of pleasure in response to rewards. Previous research has shown that ventral striatum activity tends to be more pronounced in adolescence, suggesting that people at this age experience the pleasure of rewards more intensely than younger children or adults.

Adolescence also is a time of heightened risk-taking, which may be related to young people's increased sensitivity to rewards, said University of Illinois psychology professor Eva Telzer, who led the research.

"There's this trend where from childhood to adolescence, morbidity and mortality rates increase 200 to 300 percent, and it's almost entirely due to these preventable risk-taking behaviors," she said.

Depressive symptoms also tend to increase during this time, she said. 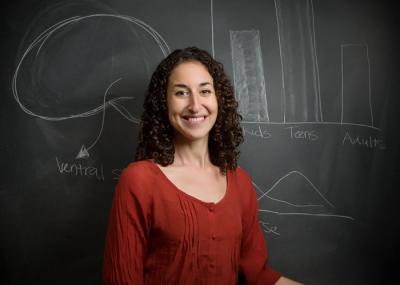 University of Illinois psychology professor Eva Telzer and her colleagues found that adolescents who get pleasure from pro-social activities are less likely to become depressed.

Using a functional brain scan, the researchers measured ventral striatum activity in adolescents who engaged in tasks that involved either giving money to others, keeping the money or making risky financial decisions in the hope of earning a reward. The team tested the subjects' depressive symptoms initially and at the end of a year.

The researchers found that activity in the ventral striatum in response to different rewards predicted whether the subjects' depressive symptoms would worsen – or lessen – over time.

"This study suggests that if we can somehow redirect adolescents away from risk-taking or self-centered rewards and toward engaging in these more pro-social behaviors, then perhaps that can have a positive impact on their well-being over time," she said.

Previous studies have focused most on negative outcomes linked to ventral striatum activation and risk-taking in adolescence, Telzer said. The new findings demonstrate that ventral striatum activation also may have a positive role in the adolescent brain. The social context within which a young person feels rewarded may matter more than the feeling itself – at least in terms of his or her mental health and sense of well-being over time, she said.

"What's exciting about this is that the very same area of the brain can predict both detriments to well-being and protection of well-being," Telzer said. "It depends on the context in which it's happening."

The study team included researchers from the University of California, Los Angeles.