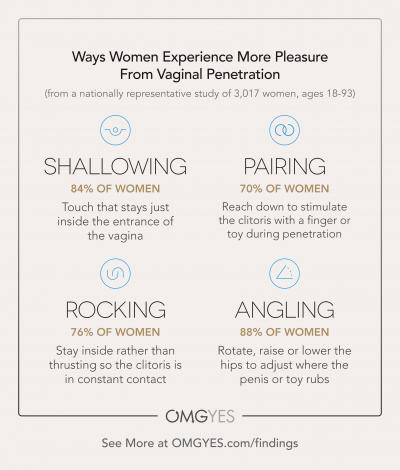 IMAGE: Researchers from Indiana University School of Medicine and OMGYES have conducted the first-ever, large-scale, nationally representative study focused on women's techniques for increasing their own pleasure from vaginal penetration. The...

INDIANAPOLIS, IN AND BERKELEY, CA (April 14, 2021) - Researchers from Indiana University School of Medicine and OMGYES have conducted the first-ever, large-scale, nationally representative study focused on women's techniques for increasing their own pleasure from vaginal penetration. The findings, published today in the scientific journal, PLOS ONE, identify and name four distinct methods: Angling, Pairing, Rocking and Shallowing.

"For the first time, we have detailed scientific data to understand the different ways that women experience more pleasure with vaginal penetration. This information can help us build a vocabulary to describe female pleasure that currently doesn't exist," explains Dr. Hensel.

"When something doesn't even have a name, it's made literally unspeakable," said Dr. von Hippel. "Until now, there haven't been words for the specific ways women improve their pleasure. By giving these prevalent techniques names and showing how they can be effective, we hope women will be empowered to explore what they like and advocate for what they want, in and outside of the bedroom."

To begin, the researchers gathered discoveries and insights from a community of 4,270 women from around the world and analyzed the results to find themes and underlying patterns. These qualitative findings then informed the quantitative, cross-sectional, nationally representative survey fielded online with 3,017 American women, ages 18-93.

The findings, described in depth in the paper and highlighted below, reveal four distinct ways women have discovered to experience more pleasure during vaginal penetration:

Rocking - 76.4% of women make penetration more pleasurable by 'rocking' the base of a penis or sex toy so it rubs against the clitoris constantly during penetration, staying all the way inside the vagina rather than thrusting in and out.

Angling - 87.5% of women experience more pleasure during penetration by 'angling' which involves rotating, raising, or lowering the pelvis/hips during penetration to adjust where inside the vagina the toy or penis rubs, and what it feels like.

Pairing - 69.7% of women find penetration more pleasurable when 'pairing' where a woman herself (solo pairing) or her partner (partner pairing) reaches down to stimulate the clitoris with a finger or sex toy at the same time as the vagina is being penetrated.

Shallowing - 83.8% of women orgasm more often or increase their pleasure through 'shallowing,' penetrative touch just inside the entrance of the vagina with a fingertip, sex toy, penis tip, tongue or lips.