Study: Greenland is on track to lose ice faster than in any century over 12,000 years 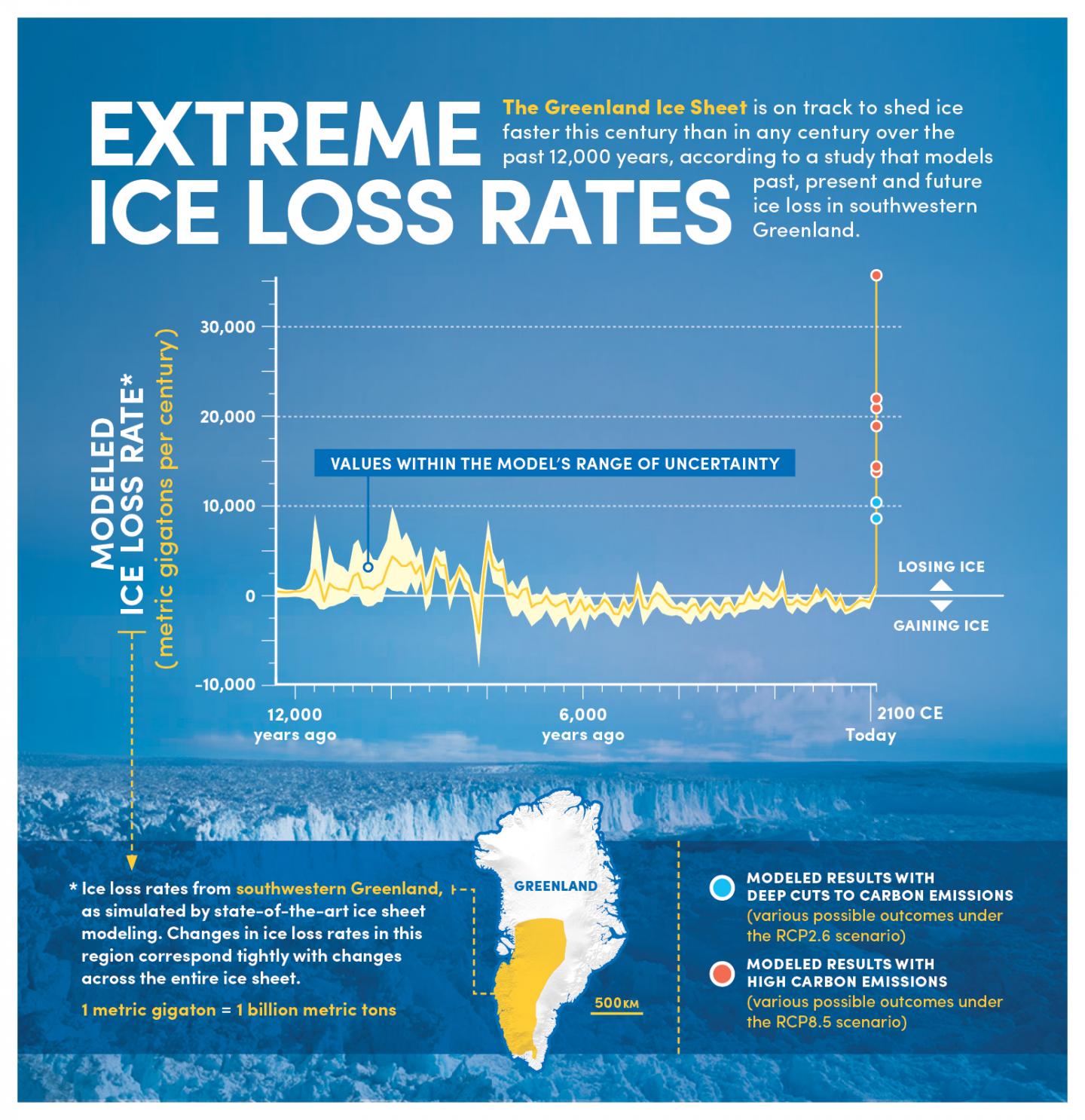 BUFFALO, N.Y. -- If human societies don't sharply curb emissions of greenhouse gases, Greenland's rate of ice loss this century is likely to greatly outpace that of any century over the past 12,000 years, a new study concludes.

The research will be published on Sept. 30 in the journal Nature. The study employs ice sheet modeling to understand the past, present and future of the Greenland Ice Sheet. Scientists used new, detailed reconstructions of ancient climate to drive the model, and validated the model against real-world measurements of the ice sheet's contemporary and ancient size.

The findings place the ice sheet's modern decline in historical context, highlighting just how extreme and unusual projected losses for the 21st century could be, researchers say.

"Basically, we've altered our planet so much that the rates of ice sheet melt this century are on pace to be greater than anything we've seen under natural variability of the ice sheet over the past 12,000 years. We'll blow that out of the water if we don't make severe reductions to greenhouse gas emissions," says Jason Briner, PhD, professor of geology in the University at Buffalo College of Arts and Sciences. Briner led the collaborative study, coordinating the work of scientists from multiple disciplines and institutions.

"If the world goes on a massive energy diet, in line with a scenario that the Intergovernmental Panel on Climate Change calls RCP2.6, our model predicts that the Greenland Ice Sheet's rate of mass loss this century will be only slightly higher than anything experienced in the past 12,000 years," Briner adds. "But, more worrisome, is that under a high-emissions RCP8.5 scenario -- the one the Greenland Ice Sheet is now following -- the rate of mass loss could be about four times the highest values experienced under natural climate variability over the past 12,000 years."

He and colleagues say the results reiterate the need for countries around the world to take action now to reduce emissions, slow the decline of ice sheets, and mitigate sea level rise. The research was largely funded by the U.S. National Science Foundation.

This multidisciplinary team used a state-of-the-art ice sheet model to simulate changes to the southwestern sector of the Greenland Ice Sheet, starting from the beginning of the Holocene epoch some 12,000 years ago and extending forward 80 years to 2100.

Scientists tested the model's accuracy by comparing results of the model's simulations to historical evidence. The modeled results matched up well with data tied to actual measurements of the ice sheet made by satellites and aerial surveys in recent decades, and with field work identifying the ice sheet's ancient boundaries.

Though the project focused on southwestern Greenland, research shows that changes in the rates of ice loss there tend to correspond tightly with changes across the entire ice sheet.

"We relied on the same ice sheet model to simulate the past, the present and the future," says co-author Jessica Badgeley, a PhD student in the UW Department of Earth and Space Sciences. "Thus, our comparisons of the ice sheet mass change through these time periods are internally consistent, which makes for a robust comparison between past and projected ice sheet changes."

"We have significantly improved our understanding of how anomalous future Greenland change will be," says co-author Joshua Cuzzone, PhD, an assistant project scientist at UCI who completed much of his work on the study as a postdoctoral researcher at JPL and UCI. "This work represents a massive success for multidisciplinary science and collaboration, and represents a framework for future successful multidisciplinary work."

Cuzzone and other researchers at UCI and JPL led ice sheet modeling, leveraging the work of colleagues at UW, who used data from ice cores to create maps of temperatures and precipitation in the study region that were used to drive the ice sheet model simulations up to the year 1850. Previously published climate data was used to drive the simulations after that date.

UB and LDEO scientists partnered on field work that helped validate the model by identifying the ice sheet's boundaries in southwestern Greenland thousands of years ago.

"We built an extremely detailed geologic history of how the margin of the southwestern Greenland Ice Sheet moved through time by measuring beryllium-10 in boulders that sit on moraines," says co-author Nicolás Young, PhD, associate research professor at LDEO. "Moraines are large piles of debris that you can find on the landscape that mark the former edge of an ice sheet or glacier. A beryllium-10 measurement tells you how long that boulder and moraine have been sitting there, and therefore tells you when the ice sheet was at that exact spot and deposited that boulder.

"Amazingly, the model reproduced the geologic reconstruction really well. This gave us confidence that the ice sheet model was performing well and giving us meaningful results. You can model anything you want and your model will always spit out an answer, but we need some way to determine if the model is doing a good job."

A continuous timeline of changes to the Greenland Ice Sheet

The study makes an important contribution by creating a timeline of the past, present and future of the Greenland Ice Sheet, Briner says. The results are sobering.

"It is no secret that the Greenland Ice Sheet is in rough shape and is losing ice at an increasing rate," Young says. "But if someone wants to poke holes in this, they could simply ask, 'how do you know this isn't just part of the ice sheet's natural variability?' Well, what our study suggests is that the rate of ice loss for this century will exceed the rate of ice loss for any single century over the last 12,000 years. I think this is the first time that the current health of the Greenland Ice Sheet has been robustly placed into a long-term context."

Despite these sobering results, one vital takeaway from the model's future projections is that it's still possible for people and countries around the world to make an important difference by cutting emissions, Briner says. Models of the RCP2.6 and RCP8.5 scenarios yield very different results, with high-emission scenarios producing massive declines in the ice sheet's health, and significant sea level rise.

"Our findings are yet another wake-up call, especially for countries like the U.S.," Briner says. "Americans use more energy per person than any other nation in the world. Our nation has produced more of the CO2 that resides in the atmosphere today than any other country. Americans need to go on an energy diet. The most affluent Americans, who have the highest energy footprint, can afford to make lifestyle changes, fly less, install solar panels and drive an energy-efficient vehicle."

"This study shows that future ice loss is likely to be larger than anything that the ice sheet experienced in the Holocene -- unless we follow a low-carbon emission scenario in the future," Badgeley says.