The study, published today in Nature, opens the door for developing a novel class of drug targets for cancer as well as inflammatory diseases such as rheumatoid arthritis, Crohn's disease and psoriasis.

"Our new research revealing the fully active structure of an RBR E3 ligase holds significant therapeutic potential in oncology and immunology," said Bernhard Lechtenberg, Ph.D., postdoctoral fellow at SBP and lead author of the study. "The three-dimensional structure we present provides detailed insights into the molecular architecture of the complex and allows us to draw conclusions about how it works." 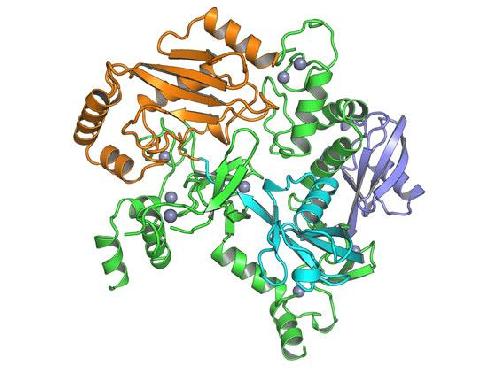 Ubiquitin is a small protein that helps regulate the function of other proteins in the body. E3 ligases carry out a process known as ubiquitination, where ubiquitin is attached to a substrate protein, changing the way it functions.

There are three classes of E3 ligases, but members of the RBR type have most recently emerged as a novel and relatively untapped class of targets for drug discovery because of their role in modulating the immune system.

"We were surprised to find how the active form of the E3 ligase we analyzed, called HOIP, attaches ubiquitin in a markedly different way--an elongated fashion--compared to the other types of E3 ligases," said Stefan Riedl, Ph.D., associate professor in SBP's NCI-designated Cancer Center and senior author of the paper. "This may be key to its role in activating the NF-kB pathway, a signaling process that is well established as a regulator of cell survival and death, and helps coordinate the immune system.

"NF-kB is the master regulator of inflammation inside cells, and its activation is believed to promote cancer development by inhibiting cell death and promoting inflammation. This study removes a significant technical barrier that has prevented exploiting RBR E3 ligases as a drug target for cancer and inflammatory disorders.

"Our next step is to continue to work very closely with our biology and immunology collaborators to more fully understand the regulation of RBR E3 ligases," added Riedl.