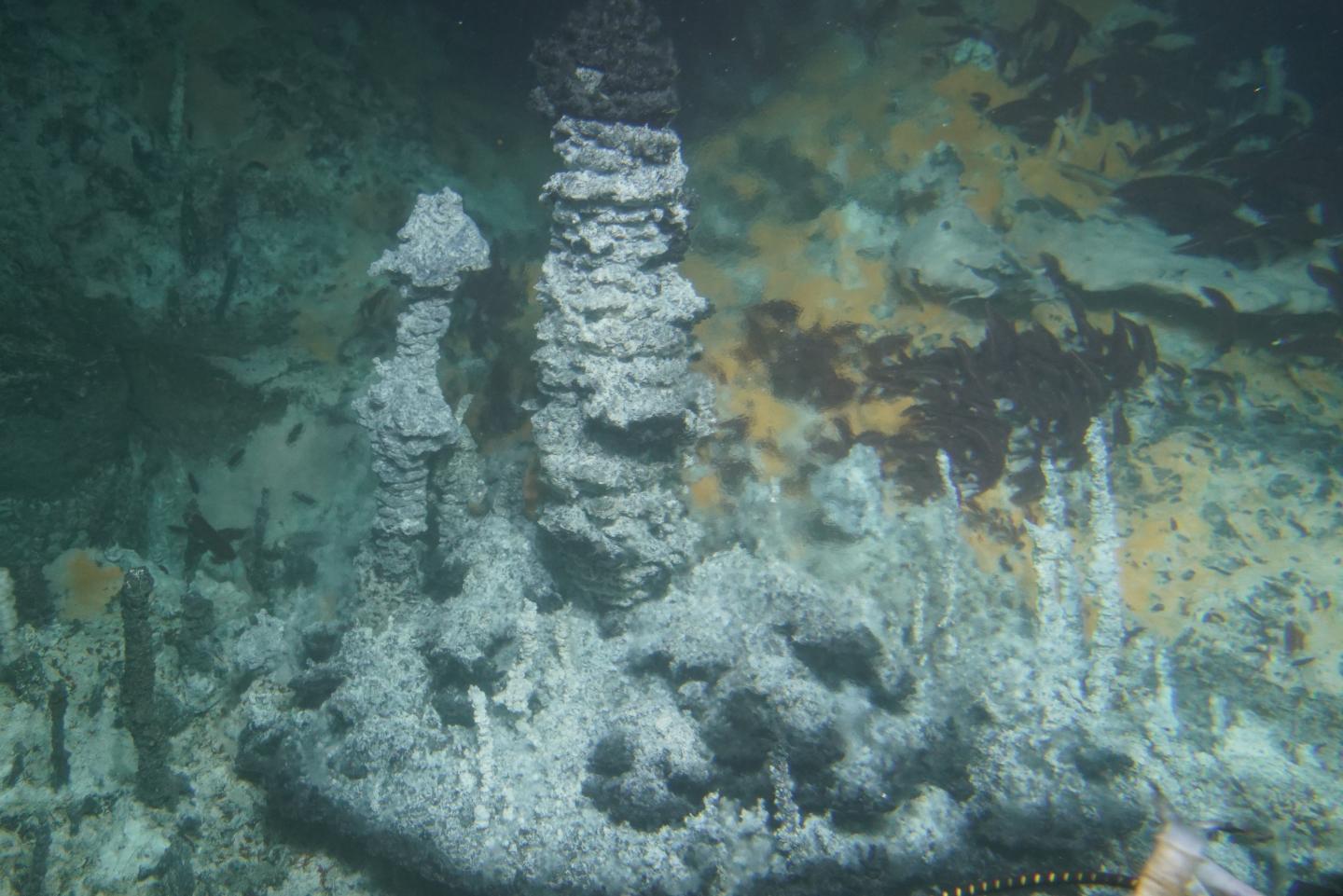 IMAGE: The Guaymas Basin hydrothermal vents - the "home " of the studied methane-oxidizing microorganisms. The heat loving microorganisms thrive under the orange microbial mat in the background. The high temperatures of...

Methane, a chemical compound with the molecular formula CH4, is not only a powerful greenhouse gas, but also an important energy source. It heats our homes, and even seafloor microbes make a living of it. The microbes use a process called anaerobic oxidation of methane (AOM), which happens commonly in the seafloor in so-called sulfate-methane transition zones - layers in the seafloor where sulfate from the seawater meets methane from the deeper sediment. Here, specialized microorganisms, the ANaerobically MEthane-oxidizing (ANME) archaea, consume the methane. They live in close association with bacteria, which use electrons released during methane oxidation for sulfate reduction. For this purpose, these organisms form characteristic consortia.

This process takes place globally in the seafloor and hence is an important part of the carbon cycle. However, studying the AOM process is challenging because the reaction is very slow. For its investigation, researchers often use a chemical knack: the stable isotope ratios in methane. But unfortunately, these isotopes do not always behave as expected, which led to serious confusion on the role and function of the microbes involved. Now researchers from the Max Planck Institute for Marine Microbiology and the MARUM - Center for Marine Environmental Sciences in Germany together with colleagues from the Weizmann Institute of Science in Israel have solved this isotope enigma and published their results in the journal Science Advances. This paves the way for a better understanding of the important process of anaerobic methane oxidation.

The puzzle and its solution in detail: Isotopes are different "versions" of an element with different masses. The isotopes of an element have the same number of protons (positively charged particles) in the nucleus and therefore the same position in the periodic table (iso topos = Greek, same place). However, they differ in the number of neutrons (neutral particles) in the nucleus. For example, carbon has two stable isotopes, the lighter 12C and the heavier 13C. Additionally, there is the familiar radioactive isotope 14C, a very rare carbon species that is used to determine the age of carbon-bearing materials. Although the chemical properties of the two stable isotopes are identical, the difference in mass results in different reaction rates. When chemical compounds react, the ones with the lighter isotopes are usually converted faster, leaving the heavier variant in the initial reactant. This change in isotopic composition is known as isotopic fractionation, and has been used for decades to track chemical reactions. In the case of methane oxidation, this means that 12C-methane is primarily consumed, leading to an enrichment of 13C in the remaining methane. Conversely, a microbial production of methane (methanogenesis) would result in particularly light methane. "Reality, however, is surprisingly different", Gunter Wegener reports. "Contrary to the logic described above, we often find very light methane in sulfate-methane transition zones."

This paradox raises questions, such as: Is methane not consumed there, but rather produced? And who, if not the numerous ANME archaea, should be responsible for this? "In my lab, we have the world's largest collection of ANME cultures. There we could try to find out if and how the methane oxidizers themselves could be responsible for the formation of light methane," Wegener continues. "The first results were deflating: At the high sulfate concentrations we normally find in seawater, the cultured microorganisms behaved according to the textbook. The remaining methane was enriched in the heavier isotopes." However, if the same experiments were carried out with little sulfate, methane got enriched in 12C, it became lighter. And this happened even though methane continued to be consumed at the same time - an effect that at first glance had little logic.

The availability of sulfate governs the isotopes effects in AOM

So how could they explain the unusual behavior of the methane isotopes? Jonathan Gropp and his mentor Itay Halevy from the Weizmann Institute of Science in Israel have spent years studying the isotope effects of microbial metabolisms, including methanogenesis - a reaction that is catalyzed by the same enzymes as the anaerobic oxidation of methane (AOM). Thus, they were the ideal partners for the team located in Bremen. "Both processes are based on a very similar cascade of seven reactions," says Gropp. "Previous studies have shown that all of these reactions are potentially reversible, meaning that they can take place in both directions. Each reaction also has its own isotope effects." With the help of a model, Gropp was able to show that, depending on how much sulfate is available, the partial reactions can be reversed to varying degrees. This could then lead to the situation that heavy isotopes are not as usual left behind but are stuck in the reaction chain, while light isotopes are channeled back to methane. "The microbes want to perform the reaction but are limited to do so because of the low sulfate concentrations," explains Gropp, adding that "Our designed model fits the isotope experiments very nicely."

The long hours in the laboratory and in front of the computer paid off for the researchers. With their study, Wegener, Gropp and their colleagues could show how AOM results in 13C-depleted methane. The experiments with little sulfate in particular nicely reflect the conditions in the natural habitat of the microorganisms, the sulfate-methane transition zones in the seafloor. There, the microorganisms often thrive on only little sulfate, as in the low-sulfate experiments. "Now we know that methane oxidizers can be responsible for the build-up of light isotopes in methane at sulfate-methane transition zones. Methanogenesis is not required for that. As we suspected, the ANME are methane oxidizers," concludes Marcus Elvert, last author of the current study. Now the researchers are ready for the next step and want to find if other reactions show similar isotope effects.