Stopping liver cancer in its tracks

This release is available in Japanese.

A University of Tokyo research group has discovered that AIM (Apoptosis Inhibitor of Macrophage), a protein that plays a preventive role in obesity progression, can also prevent tumor development in mice liver cells. This discovery may lead to a therapy for hepatocellular carcinoma (HCC), the most common type of liver cancer and the third most common cause of cancer deaths.

Professor Toru Miyazaki's group at the Laboratory of Molecular Biomedicine from Pathogenesis, in the Faculty of Medicine has shown that AIM (also known as CD5L) accumulates on the cell membrane of HCC cells, where it triggers the complement cascade, a highly efficient process of eliminating cancerized cells. Experiments showed that mice unable to produce AIM fed on a high-fat diet for a year developed multiple liver tumors. Additionally, when the same type of mice on the same diet for 45 weeks, at which point they would have already developed HCC, showed no signs of HCC after treatment with AIM, indicating that cancerous cells were being destroyed.

The group had previously found AIM, and identified its supportive role for the immune system and a protective role in obesity progression of fat cells. Now they have found that AIM is involved in eliminating cancerized cells. The group revealed that AIM accumulates on the surface of mice HCC cells, but not on normal cells and showed that AIM interferes with proteins that normally suppress the complement cascade, triggering a process that leads to necrosis and elimination of the cancerous cells. 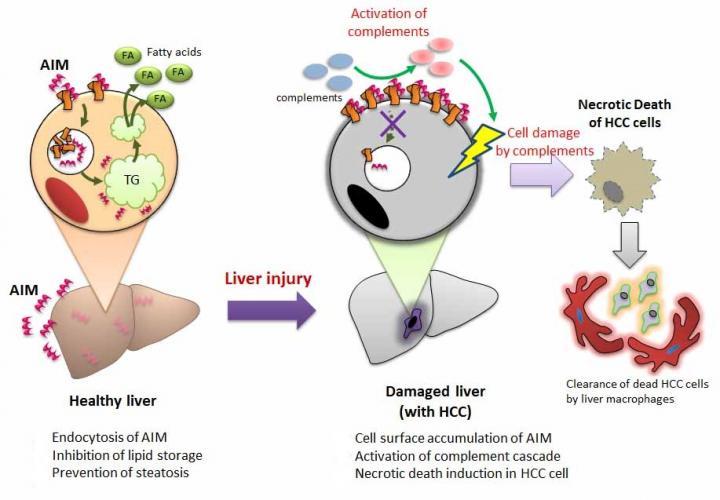 (Left) AIM is taken up into healthy liver cells, where it inhibits lipid storage and prevents steatosis, an illness caused by the buildup of excess lipid inside cells. (Right) In a liver with HCC, AIM accumulates on the cell surface, resulting in the activation of the complement cascade and inducing necrotic cell death. Dead HCC cells are then cleared by liver macrophages.

HCC can be caused by several factors including a high-fat diet, and this form of liver cancer is increasing due to rising obesity. "Because of its resistance to chemotherapy, HCC is now the third most common cause of cancer-related deaths, and therefore, it is certainly desirable to identify the preventive machinery against HCC. The most exciting finding for us is that AIM behaves in two different ways in preventing liver diseases. It enters into normal hepatocytes to keep them skinny, which prevents the buildup of fat inside cells seen in steatosis, whereas it accumulates on the surface of HCC cells to kill them," says Professor Miyazaki. Given that AIM also gathers on the surface of human HCC, it may be possible to develop AIM as a therapy for human HCC. Professor Miyazaki continues, "It is surprising that we do have an excellent system to eliminate undesired cancer cells, and that this system may certainly be therapeutically applicable not only to HCC, but also more broadly to other types of cancer."