Stars rich in phosphorus: Seeds of life in the universe 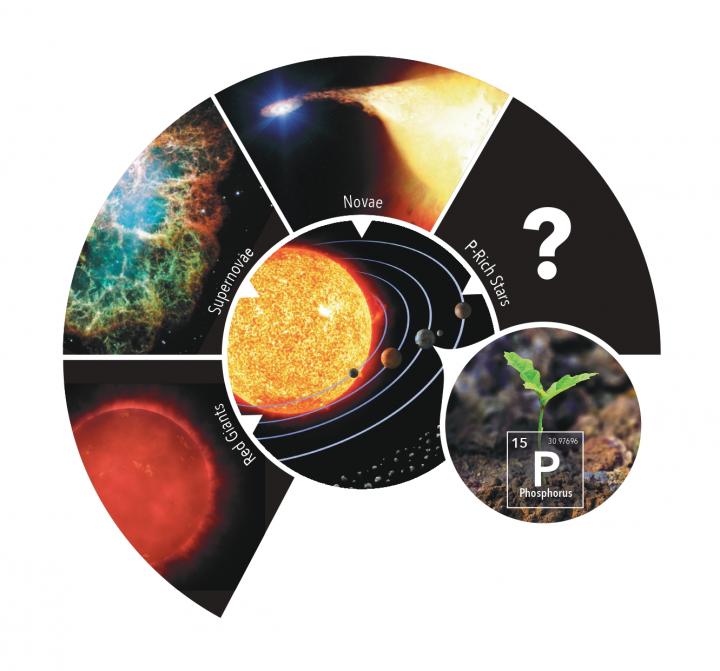 IMAGE: Scheme which represents the origin of phosphorus on Earth, with respect to possible stellar sources of phosphorus in our Galaxy

All the chemical elements in the universe, except for hydrogen and most of the helium, were produced inside stars. But among them there are a few (carbon, nitrogen, oxygen, sulphur and phosphorus) which are particularly interesting because they are basic to life as we know it on Earth. Phosphorus is of special interest because it forms part of the DNA and RNA molecules and is a necessary element in the energetic interchange within cells, and for the development of their membranes.

The study published in Nature, based on an analysis of a large number of infrared spectra (in the H band, with APOGEE) from the public data base of the Sloan Digital Sky Survey, could offer a clear set of promising stellar candidates to clarify the origin and the quantity observed of phosphorus in the Galaxy, and specifically, in our Solar System, which until now none of the current models of Galactic chemical evolution have been able to explain.

However, the peculiar chemistry which these stars show is still disconcerting. In fact, not only are they rich in phosphorus, but also in certain other elements, such as magnesium, silicon, oxygen, aluminium and even of heavier elements such as cerium. Suprisingly, after an extensive analysis of all the possible stellar sources and processes known to form chemical elements in the interiors of stars, this chemical pattern is not predicted by the current theories of stellar evolution and nucleosynthesis.

"These results show that not only are we dealing with a new type of objects, but that their discovery opens the way for the exploration of new physical mechanisms and nuclear reactions which occur in stellar interiors" explains IAC researcher Thomas Masseron, the leader of the project and the first author of the article.

"It could be an important clue about the origin of the phosphorus, which is a fundamental component of life", says Aníbal García-Hernández, another IAC researcher, who is the second author of the article.

In addition, thanks to Spanish service time, they could obtain the optical spectrum of the most brilliant of the phosphorus stars with the Echelle spectrograph (FIES) on the Nordic Optical Telescope (NOT) at the Roque de los Muchachos Observatory, (Garafía, La Palma).

"This spectrum allowed us to obtain the chemical abundances of further elements in these stars which are peculiar and rich in phosphorus, and to rule out definitively any known stellar candidate which could explain the stars which are rich in this elements", indicates Olga Zamora, a co-author of the article, and an IAC support astronomer.

"A discovery which is so unexpected and extraordinary could not have been made without a close interdisciplinary collaboration between astronomers and experts in computation", points out Arturo Manchado, an IAC research and a co-author of the article.