Scientists from Stanford University and the National Oceanic and Atmospheric Administration (NOAA) have discovered that crude oil interferes with fish heart cells. The toxic consequence is a slowed heart rate, reduced cardiac contractility and irregular heartbeats that can lead to cardiac arrest and sudden cardiac death.

The research, published in the Feb. 14 issue of Science, is part of the ongoing Natural Resource Damage Assessment of the April 2010 Deepwater Horizon oil spill.

While crude oil is known to be cardiotoxic to developing fish, the physiological mechanisms underlying its harmful effects were unclear. Stanford and NOAA scientists studying the impact of crude oil from the Deepwater Horizon spill on tuna discovered that it interrupts the ability of fish heart cells to beat effectively.

Crude oil is a complex mixture of chemicals, some of which are known to be toxic to marine animals. Past research has focused in particular on "polycyclic aromatic hydrocarbons" (PAHs), which can also be found in coal tar, creosote, air pollution and stormwater runoff from land. In the aftermath of an oil spill, PAHs can persist for many years in marine habitats and cause a variety of adverse environmental effects.

The researchers report that oil interferes with cardiac cell excitability, contraction and relaxation – vital processes for normal beat-to-beat contraction and pacing of the heart.

Their tests revealed that very low concentrations of crude oil disrupt the specialized ion channel pores – where molecules flow in and out of the heart cells – that control heart rate and contraction in the cardiac muscle cell.

This cyclical signaling pathway in cells throughout the heart is what propels blood out of the pump on every beat. The protein components of the signaling pathway are highly conserved in the hearts of most animals, including humans.

The researchers found that oil blocks the potassium channels distributed in heart cell membranes, increasing the time to restart the heart on every beat. This prolongs the normal cardiac action potential, and ultimately slows the heartbeat. The potassium ion channel impacted in the tuna is responsible for restarting the heart muscle cell contraction cycle after every beat, and is highly conserved throughout vertebrates, raising the possibility that animals as diverse as tuna, turtles and dolphins might be affected similarly by crude oil exposure. Oil also resulted in arrhythmias in some ventricular cells.

"The ability of a heart cell to beat," explained Barbara Block, a professor of marine sciences at Stanford, "depends on its capacity to move essential ions like potassium and calcium into and out of the cells quickly. This dynamic process, which is common to all vertebrates, is called 'excitation-contraction coupling.' We have discovered that crude oil interferes with this vital signaling process essential for our heart cells to function properly." 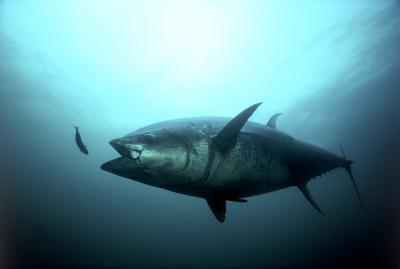 "We've known from NOAA research over the past two decades that crude oil is toxic to the developing hearts of fish embryos and larvae, but haven't understood precisely why," said coauthor Nat Scholz, leader of the Ecotoxicology Program at NOAA's Northwest Fisheries Science Center in Seattle. "These new findings more clearly define petroleum-derived chemical threats to fish and other species in coastal and ocean habitats, with implications that extend beyond oil spills to other sources of pollution such as land-based urban stormwater runoff."

The new study also calls attention to a previously underappreciated risk to wildlife and humans, particularly from exposure to cardioactive PAHs that also exist at relatively enriched levels in air pollution.

"When we see these kinds of acute effects at the cardiac cell level," Block said, "it is not surprising that chronic exposure to oil from spills such as the Deepwater Horizon can lead to long-term problems in fish hearts, as our NOAA colleagues have observed in studies of larval fish development.

"The protein ion channels we observe in the tuna heart cells are similar to what we would find in any vertebrate heart and provide evidence as to how petroleum products may be negatively impacting cardiac function in a wide variety of animals," she said. "This raises the possibility that exposure to environmental PAHs in many animals – including humans – could lead to cardiac arrhythmias and bradycardia, or slowing of the heart."

The Deepwater Horizon disaster released over 4 million barrels of crude oil during the peak spawning time for the Atlantic bluefin tuna in the spring of 2010. Electronic tagging and fisheries catch data indicate that Atlantic bluefin spawn in the area where the Deepwater Horizon drilling rig collapsed, raising the possibility that eggs and larvae, which float near the surface waters, were exposed to oil.

The spill occurred in the major spawning ground of the western Atlantic population of bluefin tuna in the Gulf of Mexico. The most recent stock assessment, conducted in 2012, estimated the spawning population to be at only 36 percent of the 1970 baseline population. Additionally, many other pelagic fishes were also likely to have spawned in oiled habitats, including yellowfin tuna, blue marlin and swordfish.

NOAA scientists have previously shown that exposure to crude oil-derived PAHs disrupts cardiac function and impairs development in larval fishes. Numerous studies, particularly in the aftermath of the Exxon Valdez spill in 1989, have described a syndrome of embryonic heart failure, bradycardia, arrhythmias and edema in exposed fish embryos. The potential for deleterious effects on young fish in the northern Gulf of Mexico is still being investigated in the aftermath of the Deepwater Horizon spill. In the present study, the NOAA team partnered with Stanford researchers to determine why oil specifically impacts heart cells.

Taking advantage of captive populations of bluefin and yellowfin tuna at the Tuna Research and Conservation Center (a collaborative facility operated by Stanford and the Monterey Bay Aquarium), the research team was able to directly observe the effects of crude oil samples collected from the Gulf of Mexico on living fish heart cells.

Block and her team bathed isolated cardiac cells from the tuna in low dose crude oil concentrations similar to what fish in early life stages may have encountered in the surface waters where they were spawned after the April 2010 oil spill in the Gulf of Mexico.

They measured the heart cells' response using a combination of sophisticated electro-physiological techniques – including "patch clamping" and "confocal microscopy" – to record how ions flowed into and out of the heart cells, and to identify the specific proteins in the excitation-contraction pathway that were affected by crude oil chemical components.

"We can examine the function of healthy heart cells in vitro and actually measure in the microscope how they respond to the presence of crude oil in real time," said Fabien Brette, a research associate in Block's lab and lead author on the study.

"The normal sequence and synchronous contraction of the heart requires rapid activation in a coordinated way of the heart cells," Block said. "Like detectives, we dissected this process using laboratory physiological techniques to ask where oil was impacting this vital mechanism."