It could be difficult for the NSA to hack encrypted messages in the future – at least if a technology being investigated by scientists at the Max Planck Institute for the Science of Light in Erlangen and the University Erlangen-Nürnberg will be successful: quantum cryptography. The physicists are now laying the foundation to make this technique, which can already be used for the generation of secret keys, available for a wider range of applications. They are the first scientists to send a pulse of bright light in a particularly sensitive quantum state through 1.6 kilometres of air from the Max Planck Institute to a University building. This quantum state, which they call squeezed, was maintained, which is something many physicists thought to be impossible. Using flashes of bright light for quantum communication through the atmosphere would have several advantages compared to the technique usually used today: it allows the photon packets to be transmitted in sunlight, something that is challenging with individual photons. Moreover, the receivers required for this are already presently in use for optical telecommunication via fibre optics and also via satellite.

Eavesdropping on a message protected by quantum cryptography cannot be done without being noticed. This is because quantum physics prevents a spy from reading a key which is encoded by specific quantum states without influencing these states. This can be exploited in a clever procedure for exchanging the key with which the data is encrypted, so that an unwelcome listener is not only detected, but is also prevented from accessing the information.

The quantum-protected communication is a fragile thing, however, and easily disturbed. All the more remarkable is the work of the Erlangen-based scientists working with Gerd Leuchs, Director at the Max Planck Institute for the Science of Light and professor at the University Erlangen-Nürnberg: "We have now succeeded in transmitting a flash of light, namely a pulse which contains many photons, through the atmosphere in a particularly sensitive quantum state," says Christian Peuntinger, who played an important role in the project. He and his colleagues sent a photon packet in a straight line from the roof of the Max Planck Institute in Nuremberg to the building of the University Erlangen-Nürnberg some 1.6 kilometres away. "This even works in broad daylight," says Christian Peuntinger. 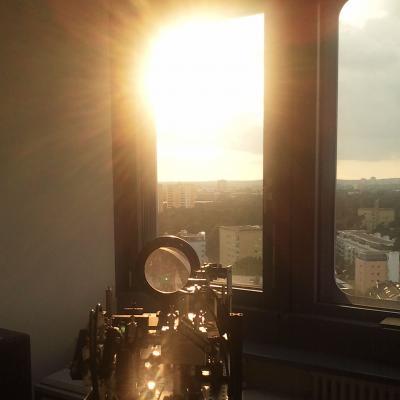 Erlangen-based physicists have sent bright pulses in sensitive quantum states through the window of a technical services room on the roof of the Max Planck Institute for the Science of Light to a building of the University Erlangen-Nürnberg. These types of light flashes are easy to receive even when the sun is shining brightly, unlike the signals of individual photons used to date.

(Photo Credit: Copyright: MPI for the Science of Light)

Quantum communication and quantum cryptography have hitherto relied mainly on individual photons being the information carriers. Physicists have already carried out many experiments in which they have sent them through the air as well. The individual photons are only easy to detect in the dark, however, because they are masked by stray light, which abounds on a sunny day – just as an individual voice can hardly be heard in a noisy pub, especially if the conversation is to take place from one end of the room to the other. But just how useful is data traffic which has to stop when the Sun is shining?

If intense flashes of light transport the information, on the other hand, the communication is also possible in bright sunlight, as the special receivers used for this are not sensitive to stray light, unlike detectors for individual photons. This is not the only advantage that the receivers for the bright pulses offer, however. They are also much faster than the detectors for individual photons and thus allow higher transmission rates. And what makes them very attractive for the researchers in Erlangen: the devices needed are already widespread in optical communication via fibre-optic cable and even orbit Earth on board telecommunication satellites.

Until now, individual photons did seem to have one advantage over flashes of bright light, however. Individual photons can also be lost as they travel through the atmosphere; but if they reach their destination, they arrive in one piece and are unchanged. The attenuation in the atmosphere reduces only the data rate.

Quantum communication which uses flashes of many photons is thus not without its own difficulties: the flashes are suitable for quantum communication only if they exist in sensitive states. These are easily destroyed if a flash of light passes air turbulence and is deformed or weakened. "This is the reason why quantum physicists have not yet even tried to send such signals through the atmosphere," says Christoph Marquardt, Leader of the Quantum Information Processing Group at the Erlangen-based Max Planck Institute. His team has now proved that these pulses are indeed ideal for quantum communication through the air: "We have even used pulses in squeezed quantum states which are particularly sensitive."

Understanding what squeezed states are requires a brief digression to the foundations of quantum physics: Heisenberg's uncertainty principle applies to quantum particles. This principle states that position and momentum, or in simple terms the velocity, of a quantum particle have no exact values, neither do many of its other properties. Rather, measurements of these values show a certain uncertainty, even if the measurement method is as accurate as possible. If this rule were to make itself felt in our everyday world, the traffic police would have a difficult task: they would not be able to determine the position and the speed of a speeding motorist that would stand up in court.

Physicists can nevertheless employ several tricks to narrow down one property of a specific pair of characteristics – position and momentum form one such pair. The other measured quantity is all the more blurred, however. This would hardly be helpful for the traffic police: they could either determine how fast a speeding motorist was racing through a speed trap, but could then not take a photo as proof, because they wouldn't know in which direction to point the camera. Or they would successfully take the photograph, but would be unable to prove that the road hog had committed an offence, because the speed could only be very vaguely determined.

Physicists have a name for a state where one property is made more precise to the detriment of another - they call it squeezed. When they investigate the uncertainty trade-off with light, they call it squeezed light. "One would probably not use squeezed light to communicate via satellite, but it would be useful in quantum cryptography," says Christoph Marquardt. Non-squeezed flashes, that are less detrimental to losses would be possible to use for satellites: "We have also transmitted such pulses through the atmosphere," says Bettina Heim, who also worked on the experiment.

The researchers in Erlangen succeeded in transmitting the squeezed light by using a trick which with hindsight, as many good ideas, is quite obvious. The physicists have simply circumvented the problem that most squeezed states of light are destroyed by the turbulences in the air. They have squeezed properties which cannot be harmed by turbulences: the polarisation in two different orientations. The polarisation corresponds to the plane of oscillation of a light wave. "Even if the turbulences make the wave fronts of a light flash appear terribly deformed, the polarisation is maintained," says Christoph Marquardt.

In contrast to what many physicists expected, the squeezed state of the light signal was maintained during the transmission, albeit that the degree of squeezing suffered somewhat as a result of losses: the polarisation in one of the directions was no longer as sharply defined as it was before its journey through the atmosphere, and the polarisation in the other direction was less blurred when it arrived at the receiver. Their experiment has put the Erlangen-based researchers in a good position in an international race: several teams around the globe are working on making quantum communication via satellite possible. After all, satellites already own receivers for the bright pulses which the team in Erlangen has now transmitted through the atmosphere. The researchers now hope their quantum flashes will also be the first to be received by satellites.

The team working with Christoph Marquardt and Gerd Leuchs transmitted pulses with an elliptical, horizontal contour (right) through the air. In the illustration, the squeezed form of the quantum state registered at the receiver can be clearly seen. The short transverse and long longitudinal axis here represent the spread of two properties which are linked to each other via Heisenberg's uncertainty principle. The property which is represented on the short axis assumes values only within a narrow range. The property shown on the long longitudinal axis has a larger spread of measured values. The transitions between the two extremes result in the elliptical shape. The corresponding representation of conventional, non-squeezed states has a circular contour.

(Photo Credit: Copyright: MPI for the Science of Light)