A team of researchers including members of the University of Chicago's Institute for Molecular Engineering highlight the power of emerging quantum technologies in two recent papers published in the Proceedings of the National Academy of Sciences (PNAS). These technologies exploit quantum mechanics, the physics that dominates the atomic world, to perform disparate tasks such as nanoscale temperature measurement and processing quantum information with lasers.

The two papers are both based on the manipulation of the same material, an atomic-scale defect in diamond known as the nitrogen vacancy center. Both works also leverage the intrinsic "spin" of this defect for the applications in temperature measurement and information processing. This spintronics approach involves understanding and manipulating the spin of electronics for technological advancement.

"These studies build on research efforts undertaken over the last 20 years to isolate and control single electronic spins in the solid state," said David Awschalom, a principle investigator on both papers and a Liew Family Professor in Molecular Engineering at UChicago. "Much of the initial motivation for working in this field was driven by the desire to make new computing technologies based on the principles of quantum physics. In recent years the research focus has broadened as we've come to appreciate that these same principles could enable a new generation of nanoscale sensors."

In one PNAS paper posted April 22 and published in the May 7 print edition, Awschalom and six co-authors at the University of California, Santa Barbara and the University of Konstanz describe a technique that offers new routes toward the eventual creation of quantum computers, which would possess far more capability than modern classical computers.

In this application, Awschalom's team has developed protocols to fully control the quantum state of the defect with light instead of electronics. The quantum state of interest in this defect is its electronic spin, which acts as quantum bit, or qubit, the basic unit of a quantum computer. In classical computers, bits of information exist in one of only two states: zero or one. In the quantum mechanical realm, objects can exist in multiple states at once, enabling more complex processing.

This all-optical scheme for controlling qubits in semiconductors "obviates the need to have microwave circuits or electronic networks," Awschalom said. "Instead, everything can be done solely with photons, with light."

As a fully optical method, it shows promise as a more scalable approach to qubit control. In addition, this scheme is more versatile than conventional methods and could be used to explore quantum systems in a broad range of materials that might otherwise be difficult to develop as quantum devices. 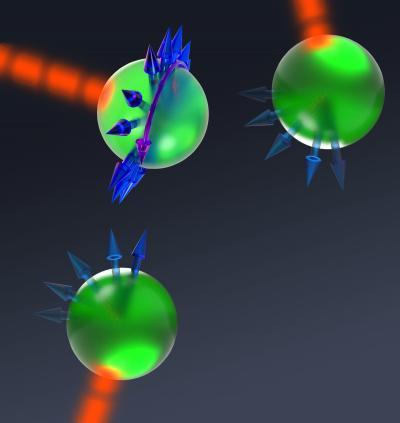 This artist's rendering shows all-optical control of an individual electronic spin within a diamond. This spin is associated with a naturally occurring defect in diamond known as the nitrogen-vacancy center, a promising quantum bit (qubit) for quantum information processing. The University of Chicago's David Awschalom and his associates have developed techniques to initialize, manipulate, and read out the electronic spin of this qubit using only pulses of light.

The quantum thermometer application, reported in a PNAS contribution posted online May 6 and published in the May 21 print edition, represents a new direction for the manipulation of quantum states, which is more commonly linked to computing, communications, and encryption. In recent years, defect spins had also emerged as promising candidates for nanoscale sensing of magnetic and electric fields at room temperature. With thermometry now added to the list, Awschalom foresees the possibility of developing a multifunctional probe based on quantum physics.

"With the same sensor you could measure magnetic fields, electric fields and now temperature, all with the same probe in the same place at approximately the same time," he said. "Perhaps most importantly, since the sensor is an atomic-scale defect that could be contained within nanometer-scale particles of diamond, you can imagine using this system as a thermometer in challenging environments such as living cells or microfluidic circuits."

The key aspect of this innovation is the development of control techniques for manipulating the spin that make it a much more sensitive probe of temperature shifts. "We've been exploring the potential of defect spins for thermometry for the past few years," said David Toyli, a graduate student in physics at UCSB and lead author of the temperature sensing work.

"This latest work is exciting because we've succeeded in adapting techniques used for stabilizing quantum information to measuring temperature-dependent changes in the quantum states. These techniques minimize the effects of environmental noise and allow us to make much more sensitive temperature measurements."

The team of researchers, also including Slava Dobrovitski of the Department of Energy's Ames Laboratory in Iowa, conducted experiments to determine the temperature range over which the spins could operate as a useful thermometer. It turns out that the particle spins can operate quite well at a wide temperature range, from room temperature to 500 degrees Kelvin (approximately 70 to 400 degrees Fahrenheit).

The chemical properties of a diamond-based thermometer also support the idea that this system could be useful for measuring temperature gradients in biological systems, such as the interior of living cells, Awschalom said. But the initial studies suggest the method is so flexible that it probably lends itself to uses yet to be imagined. "Like any new technology development, the exciting thing is what people will do with this now." 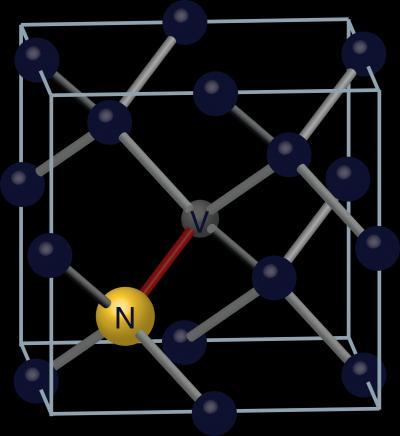 This image represents the nitrogen-vacancy center in the atomic arrangement of diamond. The dark spheres are carbon atoms and the yellow sphere is a nitrogen atom. The "V" is the nitrogen-vacancy center, from which a nitrogen atom has moved to replace a nearby carbon atom. Teams led by the University of Chicago's David Awschalom are exploiting this atomic defect to develop new quantum technologies.