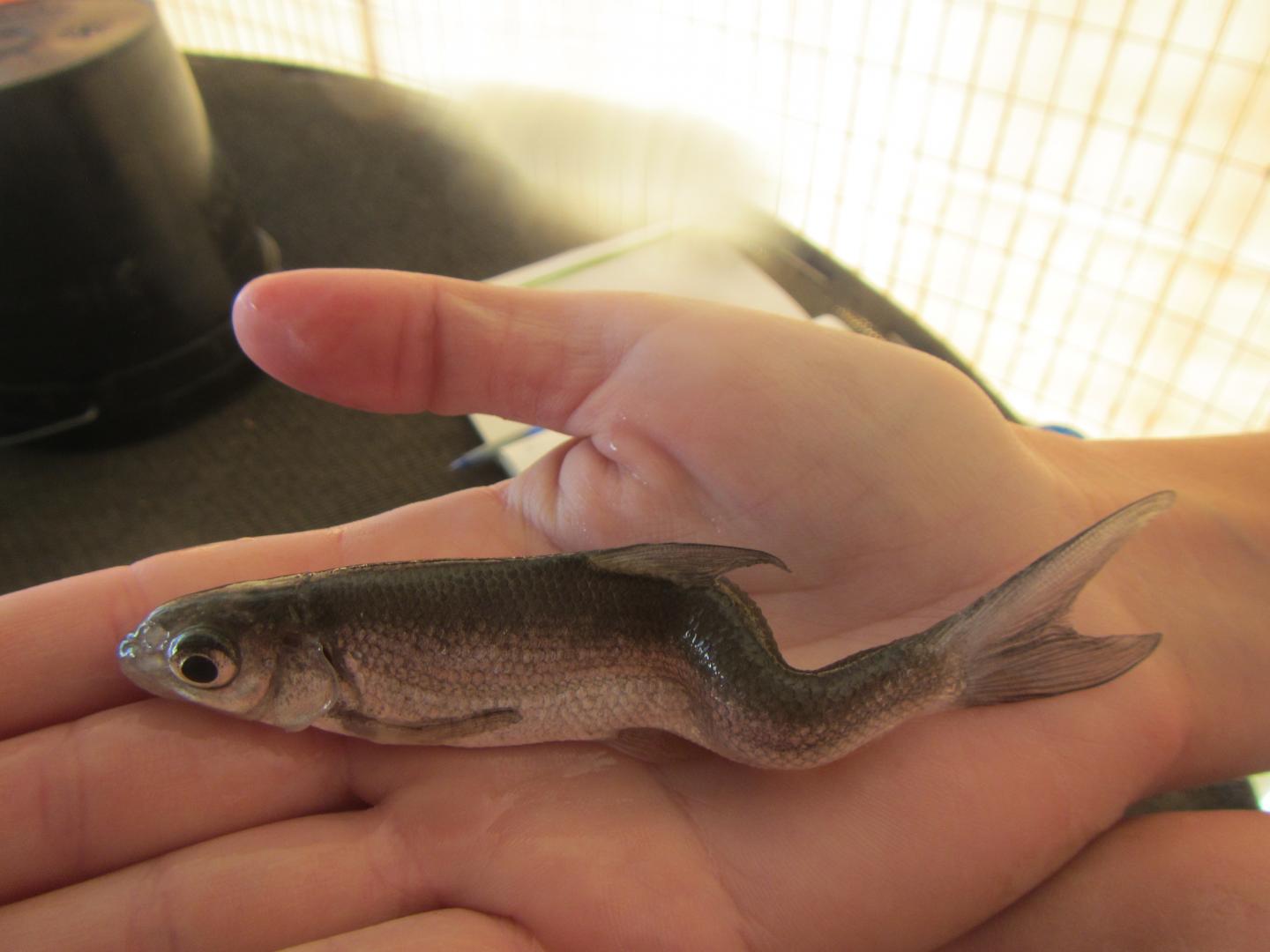 Native fish discovered with spinal deformities in California's Sacramento-San Joaquin Delta in 2011 were exposed to high levels of selenium from their parents and food they ate as juveniles in the San Joaquin River, new research has found.

The finding published in Environmental Science and Technology indicates that some fish in the region may experience harmful levels of selenium. Selenium is a naturally occurring mineral that is essential to life but turns toxic and can cause deformities at high levels. Deformities were also found in birds exposed to selenium concentrated in agricultural runoff in the same area in the 1980s.

Biologists collected the juvenile fish, minnows known as Sacramento splittail, from a pumping station in the Sacramento-San Joaquin River Delta in 2011. They soon realized that more than 80 percent of the approximately 1,000 collected fish exhibited spinal deformities.

"This was not just a few fish, it was the majority of them," said Fred Feyrer, a research fish biologist at the U.S. Geological Survey's California Water Science Center and co-lead of the research.

Scientists raised the fish in tanks for several years. In the meantime, they developed laboratory methods to examine the ear bones of the fish for clues about where they had encountered the selenium. Called otoliths, the ear bones record chemical traces of the conditions the fish experience as they grow.

"We found that the otoliths record a diary of selenium exposure from birth to death, and were the key to unraveling this mystery," said Rachel C. Johnson, a research biologist at NOAA Fisheries' Southwest Fisheries Science Center and University of California Davis and lead author of the research.

Researchers used high-intensity X-rays at Cornell University's Cornell High Energy Synchrotron Source to measure selenium concentrations in the otoliths. They revealed that the fish had absorbed selenium from their mothers, and while feeding as juveniles in the San Joaquin River. "They got it from both directions," Johnson said.

Another recent study by the same authors found high concentrations of selenium in some adult splittail feeding in the San Francisco Estuary. The concentrations exceeded protective criteria set by the U.S. Environmental Protection Agency. Splittail feed heavily on Asian clams, which concentrate selenium while filter feeding. The fish then pass the selenium on to offspring in the yolk of their eggs.

The details of how the fish encountered the selenium could help determine what to do about it, said Robin Stewart, a research hydrologist at the U.S. Geological Survey and coauthor of the research.

"These tools that help us understand where and how it happens will also help inform management agencies how they might best reduce risk," she said.

The findings raise the question of whether other fish such as salmon also encounter elevated levels of selenium, Johnson said. Scientists rarely see toxic effects of selenium in the wild. Regardless of how often it happens, afflicted fish either die or are quickly consumed by predators.

Sacramento splittail exist only in the Sacramento-San Joaquin Delta, and grow more than a foot long as adults. They reproduce most abundantly in wet years such as 2011, when rivers spread into adjacent floodplains and open new habitat to fish. One question remains: do fish such as the splittail encounter high levels of selenium only in such wet years when the floodplain habitat is available, or more commonly?

"Was this a one-time event?" Stewart asked. "What we don't know is how frequently this could be happening, because no one is out there looking for these fish before they disappear."