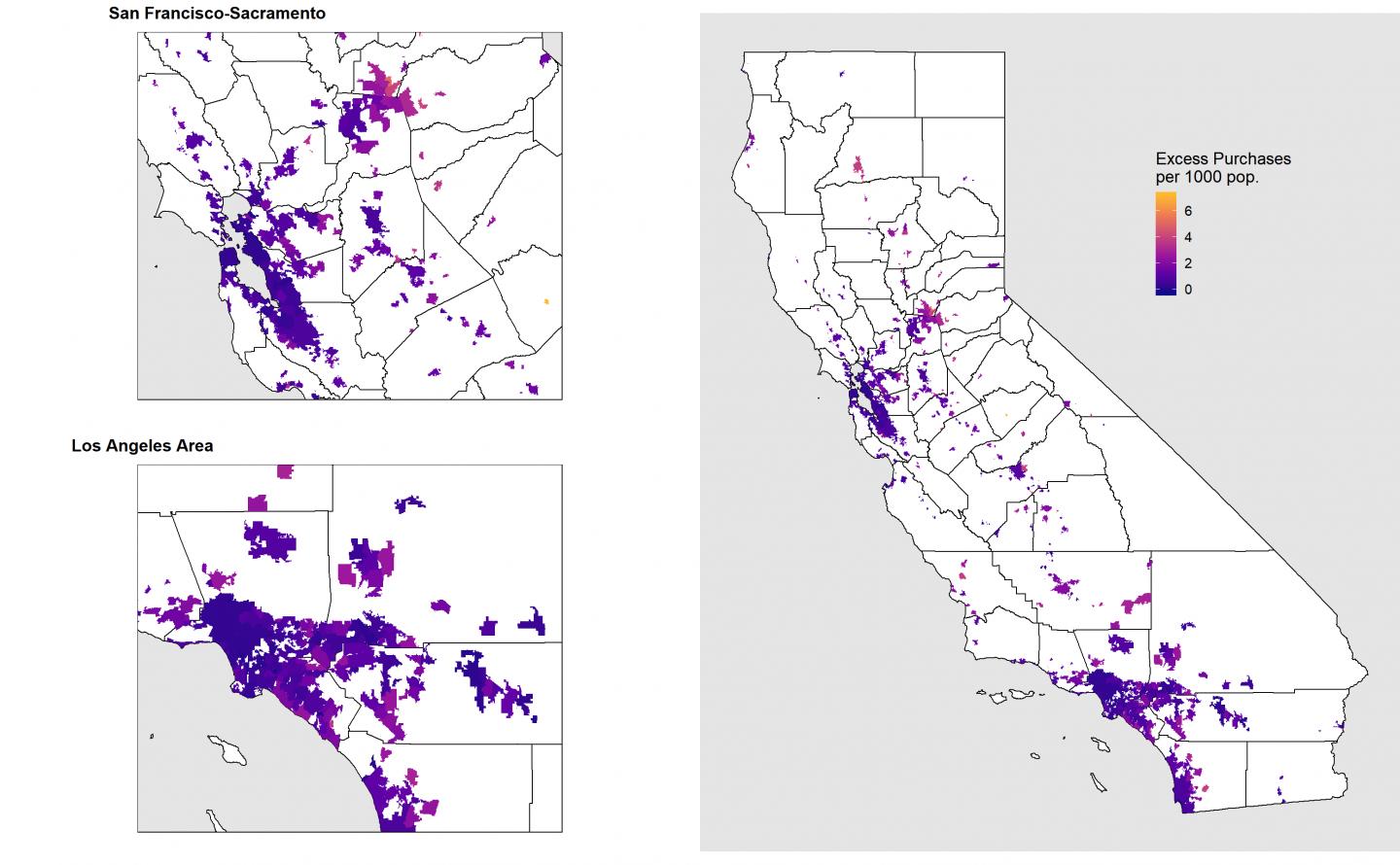 IMAGE: This is a heat map of excess firearm purchases in California following 2012 presidential election.

Spikes in handgun purchases in 2012 after Sandy Hook and the re-election of President Obama have been linked to a 4% increase in firearm injury in California, a UC Davis Violence Prevention Research Program (VPRP) study has found.

The UC Davis School of Medicine study, will be published August 25 in Injury Epidemiology, assessed the sharp rise in handgun purchasing across 499 California cities and estimated whether the additional handguns increased fatal and non-fatal injuries in these communities. It is the first study to use a direct measure of handgun purchasing to link firearm purchases with subsequent firearm-related harm and to assess impact on firearm injury.

"We estimate there were 36,142 more-than-expected handgun acquisitions in California from the election through the 6-week period following the Sandy Hook school shooting," said Hannah Laqueur, co-author of the study and an assistant professor of emergency medicine at UC Davis. "This represents an increase of more than 55 percent over expected volume during this 11-week period."
The researchers found that cities with greater increases in the rate of handgun purchasing were more likely to see an increase in the rate of firearm injury.

"We estimated a 4% increase in injuries in the year following the two events over the entire state," said Rose Kagawa, co-author of the study and an assistant professor of emergency medicine at UC Davis. "This is an important increase in the total number of people injured: approximately 290 additional firearm injuries in the state."

Though the firearm purchasing spike statewide was substantial, it accounted for less than 10% of annual handgun acquisitions. It also is only a tiny fraction of the more than 30 million estimated privately owned firearms in California, the authors said.

"But even marginal increases in handgun prevalence may translate to more injuries," Kagawa said.

For the study, the research team assessed firearms purchases in California cities with a population of 10,000 or more and used a forecasting model to predict expected handgun purchases after the 2012 election. They estimated the spike in handgun purchases as the difference between actual handgun acquisitions, as recorded in California's Dealer Record of Sales, and expected acquisition based on the model. They tracked firearm fatalities using death records from the California Department of Public Health Vital Records and non-fatal injuries using hospital and emergency room visits gathered by the Office of Statewide Health Planning and Development. The data were tallied at the zip code level and attributed to corresponding cities.

"With the increasing rates of firearm purchases in the U.S. over the last decades and 2017 marking a 20-year high in firearm-related deaths, it is important to gain a deeper understanding of the relationship between firearm acquisition and harm to develop effective prevention strategies," Laqueur said.