Solar panels can be used to provide heating and air conditioning

They may still be few, but a number of shopping centres and major stations, such as Atocha Train Station in Madrid, house trigeneration systems responsable for the production of electricity, cool air and heat. A gas engine generates electricity and, in winter, the residual heat produced is used directly for the heating circuit whilst in summer, this heat powers an absorption machine which cools the water used to provide air conditioning.

Now engineers from the Madrid Universities Carlos III (UC3M) and Politécnica (UPM) have designed a model which makes the best possible use of this system in order to allow maximum reductions in energy expediture and CO2 emissions. Furthermore, the model's ability to accommodate solar collectors is a feature new to the field. The system, the details of which appear in the journal Applied Thermal Engineering, has been designed for large office blocks.

Pedro A. Rodriguez, UC3M profesor and primary author of the study, explains to SINC: "current regulations state that the installation of solar panels in buildings is only compulsory in order to meet the demand for domestic hot water, but very few offices have either showers or kitchens. Consequently, the idea behind our proposal is that a part of the demand for heating in winter and for air conditioning in summer be met with solar power." 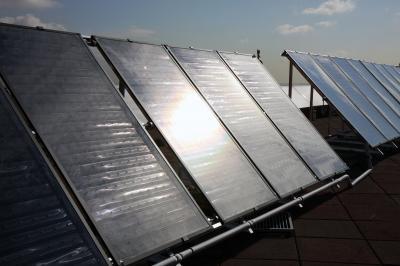 The use of solar panels to produce toilets hot water is standard practice, but researchers at the Madrid Universities Carlos III and Politécnica suggest that they may also be used to provide large offices with heating in the winter and air conditioning in the summer. Their proposal involves the incorporation of solar collectors into a gas-based cogeneration system with an absorption machine, which would reduce both energy expenditure and CO2 emissions.

In order to create the model, the team considered the energy needs of the buildings within the Madrid region, as well as monthly climatological data- temperatures and solar radiation- pertaining to the area. The system makes it posible to provide air conditioning or heating according to the specific daily needs of each office- which may vary particularly in spring and autumn.

The researchers apply a 'coefficient of merit' as a decision-making tool in order to save energy and to operate the hybrid trigeneration plant. This plant supplies 1.7 MW of electricity, 1.3 MW of heating and 2 MW of air conditioning. It can be installed in a business park of 50, 000 m2, whose offices are linked together with two rings, each a kilometre in length. These rings follow the path of the sewage works or other underground pipes.

According to Carmen Rodriguez Hidalgo, UPM researcher and co-author of the study, "the size of the investment necessary for the installation of a solar power plant means this hybrid solution takes longer- more than 14 years- to pay for itself. However, the system allows greater reductions in CO2 emissions, ranging from 1, 527 tonnes to 1, 760 tonnes per year. It also produces primary energy savings and a slight increase in anual profits".

The engineer recalls the fact that the need for energy for heating and air conditioning in Spain's buildings is of crucial importance within the context of a European roadmap whose aim is to move towards a CO2-free environment. She stated that for this reason, an increase in Spain's currently miniscule number of district heating and air conditioning systems, such as that proposed by her team, was highly desireable.