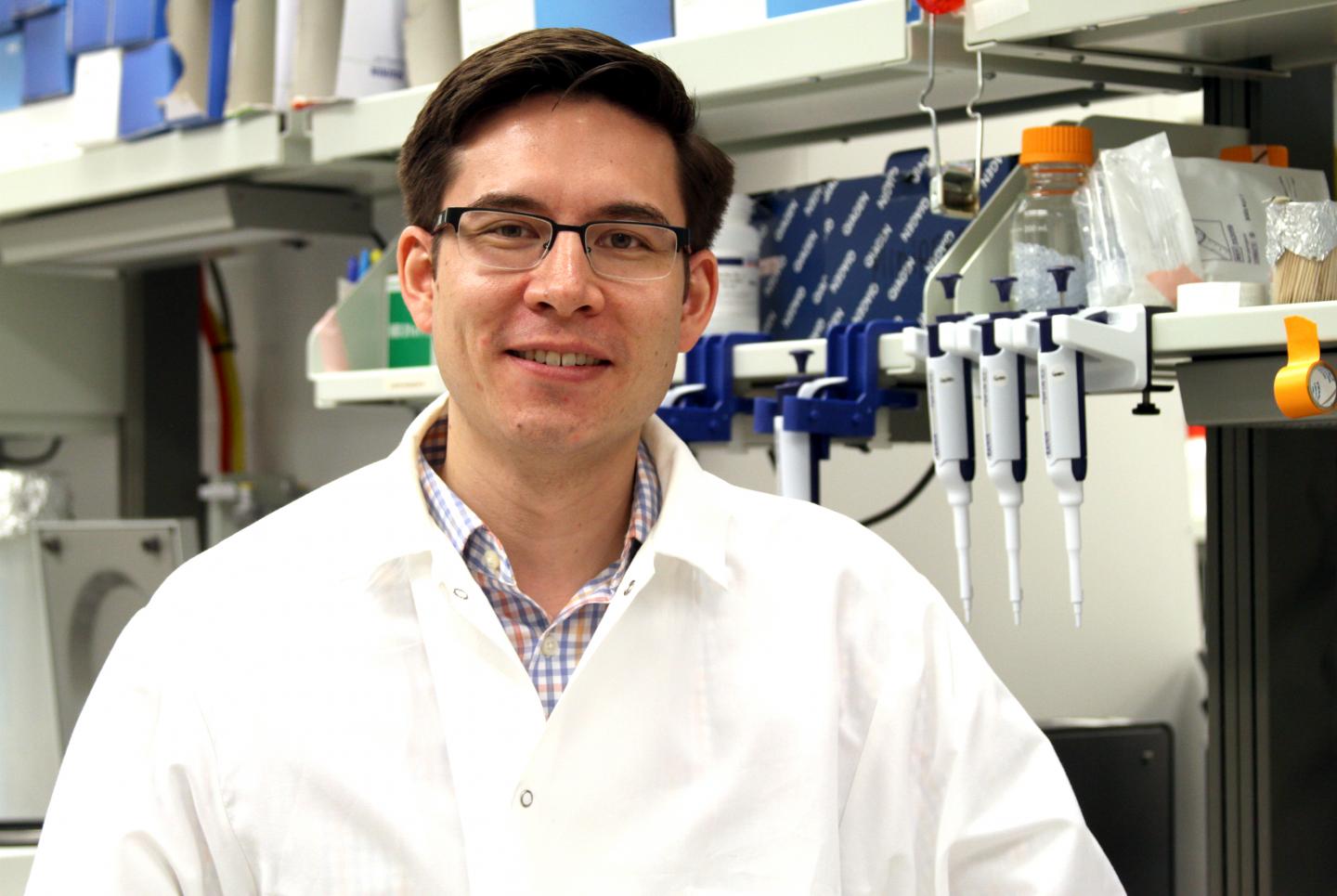 image: Alex Green is a researcher in the Biodesign Center for Molecular Design and Biomimetics and ASU's School of Molecular Sciences

A typo appearing in the draft of a novel is no great calamity. Nature, however, is often less forgiving of errors. A change in just one letter of the genetic code can have catastrophic consequences for human health.

Such genomic gaffes, involving a single base in a length of DNA or RNA, are known as point mutations. They can result in mild abnormalities like color blindness as well as serious diseases, including neurofibromatosis, sickle-cell anemia, certain forms of cancer and Tay-Sachs disease. Mutations can also produce disease variants that are resistant to conventional treatment.

Researchers would like to detect these point mutations to better assess vulnerabilities in human health, provide accurate early diagnosis and guide appropriate therapy. Until now, however, registering subtle alterations like point mutations occurring within living cells has been challenging.

In a new study, lead author Alex Green, a researcher at the Biodesign Center for Molecular Design and Biomimetics and his colleagues describe a new method for detecting point mutations. The technique can be applied in living cells, offering a rapid, highly accurate and inexpensive means of identifying mutations relevant to human health.

The method can be used in conjunction with paper-based diagnostic tests (developed by Green and his colleagues), capable of pinpointing mutations and displaying a color-based readout in reactions powered by human body heat.

"What we've done with our technology is to develop a new, portable way to detect very minute sequence differences between RNAs you're trying to detect," Green says. "With these systems, which we call SNIPRs (for Single-Nucleotide-Specific Programmable Riboregulators), we have the capacity to identify any RNA sequence based on a single nucleotide difference."

The technique is so sensitive, it can even detect epigenetic changes--subtle chemical modifications to genetic sequences that can regulate gene expression without changing the identity of individual bases.

"Advances in the method could one day be used as a low-cost alternative for personal genotyping," according to Hao Yan, a coauthor of the new study and director of the Biodesign Center for Molecular Design and Biomimetics. "The simplicity of the technique may allow at-home screening for disease-linked mutations, providing rapid and accurate testing, while maintaining data privacy for users."

In addition to its convenience as an inexpensive, versatile litmus test for mutation-related illness, the technique promises to shed new light on foundational issues in cell biology, including genetic resistance to antibiotics and mutations leading to the failure of frontline treatments for diseases like malaria and HIV.

The study appears in the current issue of the journal Cell.

In humans, the genetic code is composed of some 3 billion pairs of nucleotides, arranged in the iconic DNA double helix. The language of nucleotides, which spell out the complete building plan for any living organism, including humans, is composed of sequences of just four letters, A, T, C and G, signifying the four bases of DNA.

A point mutation in a DNA gene will be transcribed into RNA, sometimes disabling the resulting protein or altering its function, often with consequences for human health. To identify these mutations, the researchers designed SNIPRs--clever structures containing complementary snippets of RNA able to bind with RNA sequences in cells.

Within a cell, these structures activate when they encounter a mutated RNA sequence, dictated by the cell's modified gene.

If the binding of a cell's mutant RNA with the trigger strand is exact, the SNIPR unfolds, allowing sequence access by the ribosome--the machinery required to translate RNA into protein. If, however, the SNIPR encounters an unmutated sequence, there is a mismatch and translation of protein is blocked.

The resulting 100-fold difference in gene expression between mutated and unmutated RNA sequences was observed in the bacterium E. coli, (as measured in protein production), making detection of point mutations easy.

The technique relies on keen detection of differences in so-called binding or hybridization energy. "Typically, when you're thinking about a DNA or RNA base pairing, it's through hydrogen bonds," Green says. "When G binds to C that's 3 hydrogen bonds and when A binds to U, that's two hydrogen bonds." In addition to point mutations, in vitro analysis can detect minor differences in binding energy when epigenetic changes like methylation occur.

The paper-based test can be used in the field in regions where medical resources are scarce. The technology holds particular promise for the developing world as it does not require elaborate equipment and can operate at human body temperature.

First-author Fan Hong, formerly with the Biodesign Institute and now a postdoctoral fellow at Harvard, designed computer algorithms that allow for the efficient design of SNIPRs based on desired RNA target sequences.

"To make SNIPRs easy to use, we automated the process so that everybody can design them without any knowledge of RNA folding and RNA interactions," Hong says. "They already show lots of practical applications such as human genotyping, Zika virus detection and viral strain identification."

Powerful technique a boon for science

Identifying particular strains is of vital importance epidemiologically. Some genetic variants of Zika for example, appear to pose greater risk of birth abnormalities, while the currently circulating coronavirus is also evolving and has a very similar sequence to the coronavirus that caused the SARS epidemic in 2002-2003. Identifying the effects of these mutated pathogens and their geographic distribution is critically important in addressing these and future disease outbreaks.

The method could also offer new hope in the fight against cancer. For example, granulosa cell tumors, associated with a rare and aggressive form of ovarian cancer, result from just a single incorrect base out of the three billion nucleotide pairs that make up the genetic code, while the point mutations in tumor-suppressing BRCA1 and BRCA2 genes are responsible for a 6-fold increase in the lifetime risk for breast cancer.

The fine-grained sensitivity of SNIPRs can discriminate between patients who are heterozygous or homozygous for given mutations, that is, whether they carry one or two copies of the mutated gene on their chromosomes, a critical factor in determining disease vulnerability.

Certain point mutations in HIV can lead to the failure of common antiretroviral therapies. A SNIPR test for such mutations could rapidly identify these mutations and guide appropriate treatment. Conventional tests for HIV drug resistance are prohibitively expensive for many in need, costing over $200 dollars per sample.

When SNIPR probes are combined with paper-based recognition systems, the potential for rapid, low cost and precise detection of genetic point mutations can be extended globally, wherever such diagnostic tools are most critically needed. Additionally, SNIPRs promise to help researchers understand strain variations and mutation-linked resistance to common therapeutics.