Life events such as visiting another country or contracting a disease cause a significant shift in the make-up of the gut microbiota – the community of bacteria living in the digestive system, according to research published in the open access journal Genome Biology.

Two participants used smartphone apps to collect information every day for a year in the study by scientists from MIT and Harvard. The authors think the method could be rolled out to studies of human-bacteria relationships with many more participants.

Our microbiota is the community of bacteria that share space with our bodies, and is individual to each person. The bacteria live in harmony with us, but it is thought that the composition of our microbiota has a close relationship to our health. 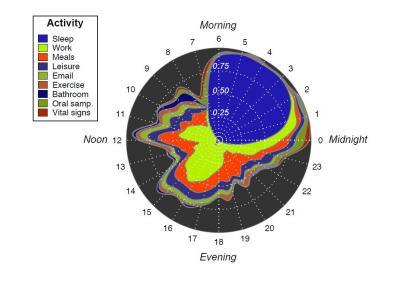 After a screening process, scientists asked two volunteers to use a smartphone app to log their daily activity, including their diet, exercise, bowel movements and mood and submit regular stool and saliva samples. The participants were screened before the experiment for their willingness to track such a broad range of daily actions. The two participants then logged their activity for a year, and the data from the diaries and genetic analysis of the bacteria in the samples were analysed in detail, to see what had the greatest effect on the composition of the microbiota.

The results showed that the participants had a 'default' microbiota, which were unaffected by sleep levels, exercise and mood. What did have a significant effect on the microbiota were two life events – one subject moved abroad, while the other had a significant bout of food poisoning which caused most pre-existing gut bacterial species to decline. The effects of relationships between diet and specific groups of bacteria manifested in a single day.

Professor Lawrence David from Duke University said: "I was surprised by our results in several ways. First, I wasn't sure we would find correlations between fiber intake and gut bacterial dynamics on such short time scales. And I was amazed to see how profoundly a single food poisoning event impacted the gut bacteria. This has given us a lot of new ideas for follow up studies and analyses of gut microbial ecology, as well as enteric infectious diseases in humans."