On the south coast of South Africa, scientists have found evidence for an advanced stone age technology dated to 71,000 years ago at Pinnacle Point near Mossel Bay. This technology, allowing projectiles to be thrown at greater distance and killing power, takes hold in other regions of Africa and Eurasia about 20,000 years ago. When combined with other findings of advanced technologies and evidence for early symbolic behavior from this region, the research documents a persistent pattern of behavioral complexity that might signal modern humans evolved in this coastal location. These findings were reported in the article "An Early and Enduring Advanced Technology Originating 71,000 Years Ago in South Africa" in the November 7 issue of the journal Nature.

"Every time we excavate a new site in coastal South Africa with advanced field techniques, we discover new and surprising results that push back in time the evidence for uniquely human behaviors," said co-author Curtis Marean, project director and Arizona State University professor in the Institute of Human Origins, a research center of the College of Liberal Arts and Sciences in the School of Human Evolution and Social Change.

The reported technology focused on the careful production of long, thin blades of stone that were then blunted (called "backing") on one edge so that they could be glued into slots carved in wood or bone. This created light armaments for use as projectiles, either as arrows in bow and arrow technology, or more likely as spear throwers (atlatls). These provide a significant advantage over hand cast spears, so when faced with a fierce buffalo (or competing human), having a projectile weapon of this type increases the killing reach of the hunter and lowers the risk of injury. The stone used to produce these special blades was carefully transformed for easier flaking by a complex process called "heat treatment," a technological advance also appearing early in coastal South Africa and reported by the same research team in 2009.

"Good things come in small packages," said Kyle Brown, a skilled stone tool replicator and co-author on the paper, who is an honorary research associate with the University of Cape Town, South Africa. "When we started to find these very small carefully made tools, we were glad that we had saved and sorted even the smallest of our sieved materials. At sites excavated less carefully, these microliths may have been discarded in the back dirt or never identified in the lab." 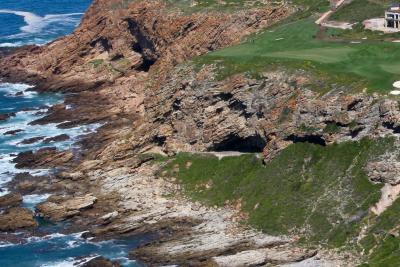 The excavation site is at Pinnacle Point, Mossel Bay, on the southern coast of South Africa. The cave opening is in the center of this image.

Prior work showed that this microlithic technology appear briefly between 65,000 and 60,000 years ago during a worldwide glacial phase, and then it was thought to vanish, thus showing what many scientists have come to accept as a "flickering" pattern of advanced technologies in Africa. The so-called flickering nature of the pattern was thought to result from small populations struggling during harsh climate phases, inventing technologies, and then losing them due to chance occurrences wiping out the artisans with the special knowledge.

"Eleven thousand years of continuity is, in reality, an almost unimaginable time span for people to consistently make tools the same way," said Marean. "This is certainly not a flickering pattern."

The appearance and disappearance is more likely a function of the small sample of well-excavated sites in Africa. Because of this small sample, each new site has a high probability of adding a novel observation. The African sample is a tiny fraction of the known European sample from the same time period.

"This is why continued and well-funded fieldwork in Africa is of the highest scientific priority if we want to learn about what it means to be human, and where and when it happened," said Marean.

The site where this technology was discovered is called Pinnacle Point 5-6 (PP5-6). This spectacular site preserves about 14 meters of archaeological sediment dating from approximately 90,000 to 50,000 years ago. The documentation of the age and span of the technology was made possible by an unprecedented fieldwork commitment of nine, two-month seasons (funded by the National Science Foundation and Hyde Family Foundation) where every observed item related to human behavior was plotted directly to a computer using a "total station." A total station is a surveying instrument that digitally captures points where items are found to create a 3D model of the excavation. Almost 200,000 finds have been plotted to date, and excavations continue. This was joined to over 75 optically stimulated luminescence dates by project geochronologist Zenobia Jacobs at the University of Wollongong (Australia), creating the highest resolution stone-age sequence from this time span.

"As an archaeologist and scientist, it is a privilege to work on a site that preserves a near perfect layered sequence capturing almost 50,000 years of human prehistory," said Brown, who codirected excavations at PP5-6. "Our team has done a remarkable job of identifying some of the subtle but important clues to just how innovative these early humans on the south coast were." 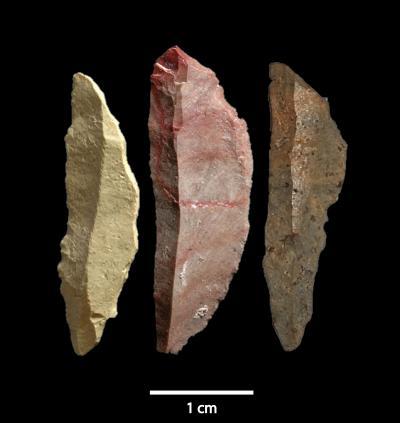 These microlith blades show a flat edge with a rounded "cutting" edge.

"When Africans left Africa and entered Neanderthal territory they had projectiles with greater killing reach, and these early moderns probably also had higher levels of pro-social (hyper-cooperative) behavior. These two traits were a knockout punch. Combine them, as modern humans did and still do, and no prey or competitor is safe," said Marean. "This probably laid the foundation for the expansion out of Africa of modern humans and the extinction of many prey as well as our sister species such as Neanderthals." 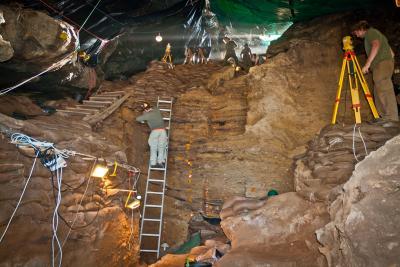 The excavation shows layered sequences of human prehistory captured in this cave. A yellow total station is shown at the right.