The research paper, led by Andrew Read, professor of biology and entomology and director of the Center for Infectious Disease Dynamics at Penn State University, reports his lab's recent work on the effect of various medication strategies in groups of malaria-infected mice. "Our results indicate that the current strategy of aggressive use of medications to eliminate all targeted disease pathogens paradoxically gives drug-resistant pathogens the greatest possible evolutionary advantage," Read said. "This universally accepted strategy -- which has been the orthodox approach for many decades – may actually promote the proliferation of drug-resistant forms of infectious diseases." The question, says Read, is whether there are ways of treating patients that are equally good at making the patient healthy but give resistant parasites less of an advantage. Read is not arguing for changes in policy or for changes in doctor or patient behavior, but rather for the need for an improved knowledge base.

Read illustrates the problem with a short summary of the evolution of a drug-resistant malaria parasite. The wonder drug for malaria in Africa during the last century was chloroquine, but it now is useless in most of Africa because chloroquine-resistant mutant parasites spread across the continent after being introduced from South East Asia. "Because the strategy in Africa was to wipe out all the parasites in patients being treated, the drug-resistant malaria parasites did not have to compete with the now-dead drug-sensitive parasites," Read said. "We are suggesting that this treatment strategy made it easier for the resistant parasites to spread, more rapidly ending the effectiveness of the chloroquine. I think we have to ask whether the strategy of eliminating all sensitive parasites as fast as possible when we treat patients really is the best way to slow resistance evolution" he said. "We can ask the same question about the development of the drug-resistant MRSA bacterium in hospitals that routinely make aggressive use of broad-spectrum antibiotics." Read said. Similar arguments recently have been made by other scientists who study the development of resistance to cancer drugs. "Evolution is about competition -- whatever is more capable of surviving wins," Read said.

In addition to discussing improved strategies for preventing the spread of strains of drug-resistant pathogens, the research paper also discusses strategies for preventing drug-resistant mutations from occurring in the first place. "The current orthodoxy of aggressive medication is based on the intuitive idea that killing all the disease pathogens should prevent any of them being able to evolve into mutant drug-resistant forms," Read said, "but spontaneous drug-resistant mutations within an individual patient are rare in many diseases, including malaria, tuberculosis, and many bacterial infections." Most patients get drug-resistant infections from other people. "For these kinds of diseases, preventing the spread of infections may be more critical than destroying every last drug-sensitive pathogen inside an individual patient, particularly if doing so gives maximum advantage to any drug-resistant pathogens that already exist there," Read said. 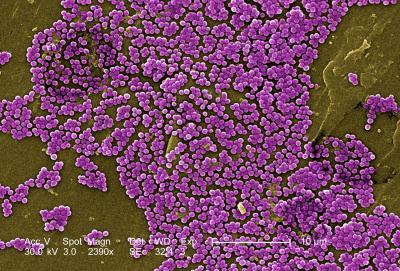 In the war between drugs and drug-resistant diseases, is the current strategy for medicating patients giving many drug-resistant diseases a big competitive advantage?, asks a research paper that will be published in the Proceedings of the National Academy of Sciences. The paper argues for new research efforts to discover effective ways for managing the evolution and slowing the spread of drug-resistant disease organisms. The research is led by Andrew Read, professor of biology and entomology and director of the Center for Infectious Disease Dynamics at Penn State University. The ultimate goal of this new research effort is to develop a new science-based model for drug-resistance management that will inform treatment guidelines for a wide variety of diseases that affect people, including malaria and other diseases caused by parasites, MRSA and other diseases caused by bacterial infections, AIDS and other diseases caused by viruses, and cancer. This colored 2005 scanning electron micrograph (SEM) shows numerous clumps of methicillin-resistant Staphylococcus aureus bacteria, commonly referred to by the acronym, MRSA; Magnified 2390x.

Research studies indicate that all-out chemical warfare against these diseases could be causing more evolutionary harm than good. This is why, says Read, we need to ask whether it is possible to use drug therapies with a lighter touch. "Clearly, the first aim is to make and keep the patient healthy. But as much as possible, we have to let the immune system do the work, and look into other ways of limiting the spread of infectious diseases," he said. "Overwhelming chemical force may at times be required, but we need to be very clear about when and why we use it in order to prevent outbreaks of more difficult-to-treat diseases. The point is that nobody really knows what the optimum plan is because the research that could give us a scientifically proven strategy has not yet been done. People just take it for granted that the best thing is to kill all the pathogens. That's what gives drug-resistant pathogens the advantage."

"Continuing to medicate long enough to get rid of every last parasite gives a huge evolutionary advantage to the parasites the antibiotic is not capable of killing," Read said. "A better strategy for drug-resistance management is to knock out the drug-sensitive competition only as much as we need to for the health of the patient, and no more. Letting the patient's immune system clear any remaining disease organisms gives absolutely no survival advantage to the drug-resistant pathogens. The immune system often just needs to battle fewer parasites or to have a longer time in which to ramp up its counterattack. This strategy also would help to keep our effective drugs working for as long as we possibly can before drug-resistant strains evolve."

So what are doctors and patients supposed to do? Read's advice is that patients should continue taking their medications exactly as their physician prescribes. "At this time, before a sufficiently thorough scientific understanding has been achieved that will allow us to make informed decisions, there is no reason to change current medical practice," Read said. "However, it is critical that we develop delivery strategies for therapeutic drugs that are based not on long-held but untested intuitions, but on an accumulation of evidence based on rigorous research studies." The goals of the research that Read advocates are to reveal the best strategy for making patients healthy while also preventing infections from spreading to other people, and to lengthen the useful lifespan of effective medications by assuring that treatment methods will not give drug-resistant pathogens a huge evolutionary advantage.

"At the moment, we just don't know which strategies are best for which diseases in which situations, but the result of our acceptance of the current medication strategy is that we have not taken a sufficiently hard look at its scientific validity. We are paying an increasingly high price in the health of individual people as well as of entire societies, which is why my lab and others are working to develop more powerful evolutionary-management strategies to limit the evolution and spread of drug-resistant diseases."