Shedding light on how the human eye perceives brightness 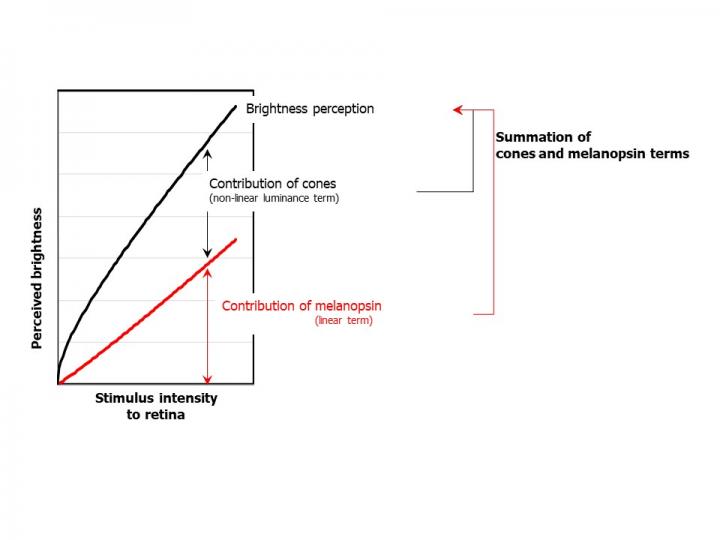 IMAGE: Brightness perception can be explained by the summation of a non-linear luminance term and a linear melanopsin term, suggesting that melanopsin signal may express the absolute brightness level.

Japanese scientists are shedding new light on the importance of light-sensing cells in the retina that process visual information. The researchers isolated the functions of melanopsin cells and demonstrated their crucial role in the perception of visual environment. This ushers in a new understanding of the biology of the eye and how visual information is processed.

The findings could contribute to more effective therapies for complications that relate to the eye. They can also serve as the basis for developing lighting and display systems.

The research was published in Scientific Reports on May 20th, 2019.

The back of the human eye is lined with the retina, a layer of various types of cells, called photoreceptors, that respond to different amounts of light. The cells that process a lot of light are called cones and those that process lower levels of light are named rods.

Up until recently, researchers have thought that when light struck the retina, rods and cones were the only two kinds of cells that react. Recent discoveries have revealed an entirely new type of cells, called intrinsically photosensitive retinal ganglion cells (ipRGCs). Unlike rods and cones, ipRGCs contain melanopsin, a photopigment that is sensitive to light. While it has been established that ipRGCs are involved in keeping the brain's internal clock in sync with changes in daylight, their importance in the detection of the amount of light had not yet been well understood.

"Until now, the role of retinal melanopsin cells and how they contribute to the perception of the brightness of light have been unclear," said Katsunori Okajima, a professor at the Faculty of Environment and Information Sciences, Yokohama National University and one of the authors of the study.

"We've found that melanopsin plays a crucial role on the human ability to see how well-lit the environment is. These findings are redefining the conventional system of light detection that so far has only taken into consideration two variables, namely brightness and the amount of incoming light. Our results suggest that brightness perception should rely on a third variable -- the intensity of a stimulus that targets melanopsin."

In the study, the authors showed how cones and melanopsin combine to allow the perception of brightness. In order to better assess the contribution of melanopsin to the detection of light, the melanopsin's signals were isolated from cones and rods. This separation allowed for more accurate observation of the melanopsin signal alone. Visual stimuli were carefully designed and positioned in order to specifically stimulate the light-sensitive chemical. Also, the researchers used tracking software to measure study participants' pupil diameters under each visual stimulus. This served as a way to determine the relationship between brightness perception and the actual visual stimulus intensity on the retina.

This work was supported by the Japan Society for the Promotion of Science Grants-in-Aid for Scientific Research (Grant Numbers 15H05926 and 18H04111).