surface. The researchers found that larger males were able to dominate smaller males in these battles -- no matter how their forceps appeared. But when smaller males fought each other, the one with the more asymmetric forceps was usually the winner.

The study is one of very few to look at asymmetry in body features that function as a weapon, "and weapons should be under strong selection, since they are used both to fight with other males for mates and to capture prey," Zink said.

The researchers also performed an experiment where they manipulated forceps asymmetry in smaller males by clipping one of the forceps. They soon discovered that the winners in these battles were determined by the original forcep asymmetry among the insect pairs -- rather than the manipulated asymmetry -- suggesting that asymmetry may be linked to another unknown feature that affects dominance and aggression.

Zink added that "one of the obvious questions is whether females prefer to mate with males that have more asymmetric forceps, given that they will pass this beneficial trait along to their sons." This question of female choice is currently the subject of additional graduate student experiments in the lab. But for now, it appears that being asymmetric is a benefit rather than a cost for males that compete for mates and/or food, making this one of the first studies to reveal a benefit for asymmetric weapons. 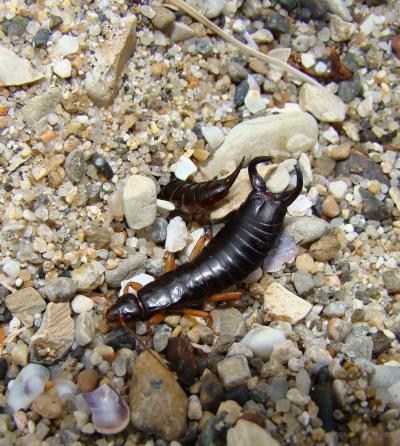 This is a male maritime earwig with asymmetric weapons on the beach. 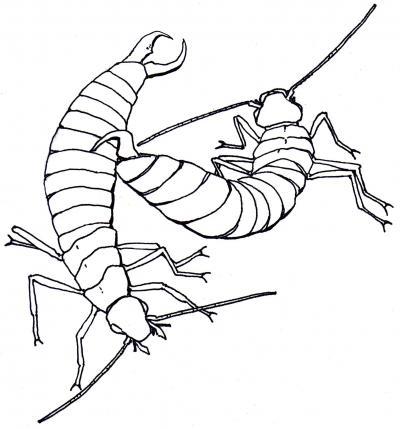 This drawing depicts two earwigs fighting. The more curved (right) forcep is grasping the top of the opponent's abdomen, which is typical during a fight.