Tanzania has one of the fastest growing human populations in the world. But even if there are places where the population density isn't yet that high, the number of conflicts between humans and other species is expected to rise as pressure on land areas grows.

Angela Mwakatobe, who recently defended her PhD at the Norwegian University of Science and Technology (NTNU) in Trondheim, has studied villages at various distances from Serengeti National Park in Tanzania to see how people interact with the wildlife and the best ways to protect both.

The buffer zones around Serengeti and Tanzania's other national parks are subject to certain rules. Here, human activity is only allowed if it benefits both the environment and local communities.

"Farmers living close to Serengeti National Park get training on how to handle and protect the wildlife in the area, and are also given the sense that this is important to themselves as well," says Mwakatobe.

The locals are compensated in the form of community investments, such as schools and water wells. Twenty-five percent of the income from the parks is fed back into local communities, and local authorities are supposed to distribute these benefits among the residents.

Not surprisingly and in spite of these efforts, there are clashes between villagers and wildlife in the settlements close to the national park.

But even 80 kilometers (49 miles) away from the border there are conflicts between humans and animals, her research shows.

For that reason Mwakatobe thinks that education and support are also important for people even further away. The conflicts arise over attacks on wildlife, raids on crops, disease and use of bushmeat.

Attacks on livestock and crop raids are more common the closer villages are to the national park. In general, people who keep livestock in the villages located close to the protected areas are on constant guard with arrows and spears while their animals are out grazing.

The building of livestock enclosures or bandas to protect livestock at night and the use of guard dogs were more preferred in the villages that were the farthest away from the protected areas.

Primates are seen as the worst plague and the animals that are the most destructive. Olive baboons, vervets and other primates are the main culprits. The next most damaging animals are elephants. 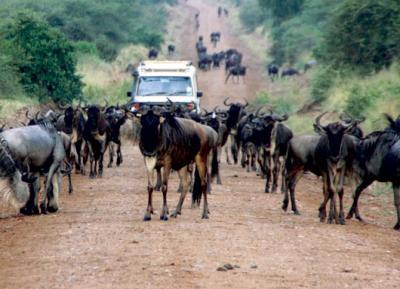 More than two million animals migrate through Serengeti National Park in Tanzania. Wildebeests in the thousands cross existing roads and through villages, which can cause problems with villagers.

However, "elephants are only a problem close to the park," says Mwakatobe.

Diseases from wild animals can also spread to domesticated animals. Disease and loss of livestock due to them is a bigger problem in the villages closest to the national park.

While the hunting of bushmeat is most common close to Serengeti, illegal markets are also found in the villages further away.

"In Tanzania there is no legal market for bushmeat," explains Mwakatobe. "This hunt is highly illegal."

"But availability is limited," she says.

For this reason, villagers kill wild animals illegally. This is especially common when the huge migrations of more than two million animals pass through the villages. The migration mainly includes wildebeests, but can also include zebras, antelopes and other animals.

It can be very hard to taste the difference between dried meat from different species. One animal in particular, the topi, a kind of antelope, is supposed to taste about the same as normal beef.

People close to the national park are best at identifying the different types, but this is by no means a safe method for identifying a species.

Mwakatobe thinks villages close to the national park should get support to keep chickens and other animals, and should also be trained in aquaculture so that the need for bushmeat goes down.

She recommends further studies of the conflicts between humans and other primates. Mwakatobe thinks that a combination of several kinds of guarding practices will be the most effective in minimizing animal raids on crops. More education is necessary to keep the number of attacks on livestock down.

Angela Mwakatobe works at the Tanzania Wildlife Research Institute. Professor Eivin Røskaft from the Department of Biology supervised her work at NTNU.