PORTLAND, Ore. — A team led by an Oregon Health & Science University researcher has sequenced and annotated the genome of the only ape whose DNA had yet to be sequenced — the gibbon, an endangered small ape that inhabits the tropical forests of Southeast Asia.

The team's work, published in the Sept. 11 edition of Nature, gives scientists new insight into the evolution of the gibbon genome and its extraordinary number of chromosomal rearrangements. Chromosomal rearrangements are structural changes in the DNA that are often problematic in other species — including causing cancer in humans — but seem to have happened in gibbons at a very high frequency. The genome sequencing work also provides new details on the family tree and evolutionary history of the gibbon lineage that has been a longstanding source of debate. Additionally, the team uncovered some genetic clues on how gibbon species over millions of years developed longer arms and powerful shoulder and arm tendons — important for these tree-dwelling primates whose main mode of locomotion is swinging from tree to tree in the dense tropical forest.

Finally, like the DNA sequencing of other apes and non-human primates, the team's work gives science new insight into the human genome — since apes are so genetically similar to humans. Unraveling primate genomes is vitally important as researchers try to understand the genetic factors in human health and disease.

"We do this work to learn as much as we can about gibbons, which are some of the rarest species on the planet," said Lucia Carbone, Ph.D., assistant professor of behavioral neuroscience in the OHSU School of Medicine and an assistant scientist in the Division of Neuroscience at OHSU's Oregon National Primate Research Center. "But we also do this work to better understand our own evolution and get some clues on the origin of human diseases."

Gibbons, together with the other apes — orangutans, gorillas, chimpanzees and bonobos — are the closest relatives to humans. Humans and these apes all belong to the "superfamily" called Hominoidea.

But unlike other apes and humans, gibbons have undergone a high number of chromosomal rearrangements as they have evolved.

"You might think about chromosomes as constructions made of different plastic toy bricks. In the rearrangement, one or more toy pieces separate from the others and reattach in a different orientation or location. Or, they might get lost or duplicated," said Carbone. "We know that these types of events have been occurring in the other apes, including humans, but gibbons show a much higher frequency. One of our goals while analyzing the genome was to try to identify the cause of this instability." 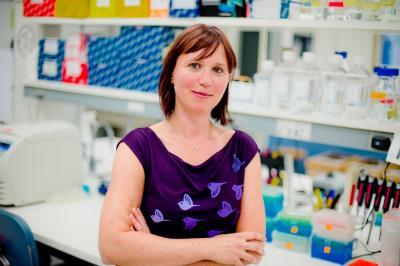 Lucia Carbone, Ph.D., is an assistant professor of behavioral neuroscience in the OHSU School of Medicine and an assistant scientist at OHSU's Oregon National Primate Research Center.

Such chromosomal rearrangements can cause major problems in cells, and can contribute to birth defects and cancer in humans. But they seem to have been well tolerated by gibbons. The gibbon genome will now be a tool to better understand the mechanisms behind these "errors."

"The LAVA element is an evolutionary novelty that is only present in the DNA of gibbon species," Carbone said. "We think that it played a major role by increasing the 'errors' during cell division and chance for chromosomal rearrangements."

Interestingly, many of the genes impacted by the LAVA element in gibbons are mutated in some types of tumors in humans. The gibbon genome project shows that by understanding how evolution experiments with genomic rearrangement, we might then be able to apply that knowledge to human health.

"This is the last ape to be sequenced and the end of an era in human comparative genomics," said Tomas Marques-Bonet, evolutionary geneticist at Institut de Biologia Evolutiva (CSIC/UPF) and the National Center of Genomic Analysis (CNAG) in Barcelona, Catalonia, Spain, and co-author on the paper. "Now we have tools — the genomes — for all the closest species to humans."

Around that time, there were major changes in the tropical and subtropical forests and significant shifts in sea levels in the territory occupied by the gibbons. Those geographical changes likely contributed to the rapid divergence of the gibbon genera by generating isolation between groups. Isolation is one of the major forces to drive the rise of new species. 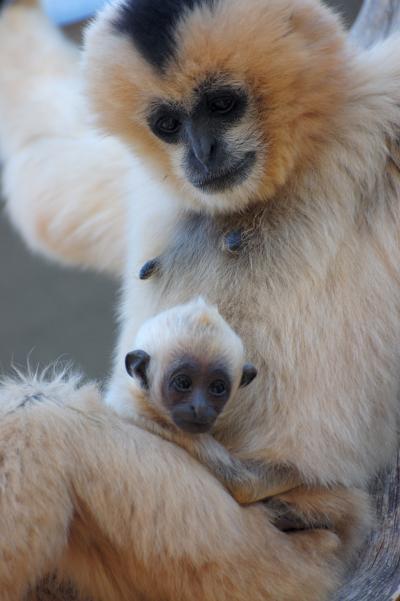 This is a northern white-cheeked gibbon (Nomascus leucogenys) mother (Astriks) with four-week-old male infant (Rossy) at the Gibbon Conservation Center in Santa Clarita. Calif. Astriks is one of the gibbons whose DNA sequence was analyzed by scientists who recently reported their results in Nature.