Sending bees into clouds of death

What bee would fly back and forth through a massive, 60-acre death cloud ten times over the course of 12-and-a-half hours? That question forms the basis for a new paper stating bees are not only doing that, but they are doing it for no benefit to agriculture, because the pesticide they are flying through doesn't work at all.

Environmentalists often lobby, sue and fundraise for a ban on chemicals "at the drop of a rat", as the American Council on Science and Health famously phrased it. By that they mean the best way to get attention for a claim is to stick tubes of chemicals into the stomach of a rat and count how many die. Yet rats are not little people so it is hard to get cultural traction for those claims now. The public has been jaded by claims coffee causes breast cancer, granite counter tops are giving us radiation poisoning and organic food will help a child get into Stanford.

But while rats are not little people, bees are bees, and if there is harm to bees, a vital pollinator, our food supply is at risk. Bees are in nature, of course, but in the commercial sector almost all are used for things like almonds because there aren't enough bees available where those are grown. New research by Perdue University entomologist Christian H. Krupke gives the hapless rat a break and instead finds bees are going to be harmed.Krupke’s title, “Planting of neonicotinoid-treated maize poses risks for honey bees and other non-target organisms over a wide area without consistent crop yield benefit” tells the whole explosive story. Not only is this product damaging pollinators, it isn't helping farmers in the least. 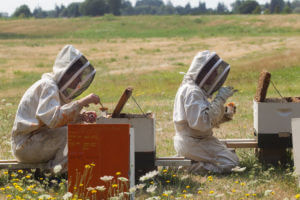 Farmers are some of the most Big Data-driven people in the world, and it seems odd that they are not only fooling themselves but spending money (and therefore losing profits when margins in agriculture are razor-thin) to do so. So let's unpack that title a little. Neonicotinoids, or neonics for short, are the most popular form of insect control for the crops we eat and therefore enemy number one for activists. In their most common form as seed treatments, neonics represent a massive technological leap over old-fashioned bug-killing sprays, because they are not "broad spectrum", they are targeted. What farmer doesn’t prefer the convenience of seeds ready to go in the bag and won't involve spraying?

When there is no toxicology or experimental evidence, create a computer model

Popular among farmers or not, Krupke explosively claims neonic-treated seeds “pose risks” to honeybees, so let's look at the experimental data and field measurements to fact-check him.

Except there isn't any. His conclusion isn’t based on experimental data or field measurements, it's based entirely on his own hypothetical model. If you believe in the existence of gravity-defying death clouds, you can stop reading. If you instead prefer science, see you in the concluding paragraph.

Krupke began by figuring out how the amount of each neonicotinoid chemical needed to kill a honeybee.  This figure in species is the "lethal dose" - a dosage fatal to 50 percent of the critters. It's commonly called “LD50.”

“We calculated an LD50 for honey bees in our study area…. This allowed us to calculate the deposition necessary per square metre to achieve a lethal dose on a stationary, resting honey bee.”

Krupke actually did measure the amount of neonic dust kicked up near a series of test fields while the coated seeds were being planted, but this figure was way below the fatal LD50 amount.

So the study ends there, right? Hypothesis fail.

No, he changes in mid-course, a no-no in credible science. That’s where his hypothetical model comes in. “To visualize the plume of neonicotinoids around a field,” Krupke wrote, “we used kriging on the wind-adjusted coordinates to extrapolate a complete surface,” using statistical software.

“Kriging” is a fancy way to say he created a statistical formula to create his hypothetical dust cloud.

Bees are not dumb

Bees are found on every continent except Antarctica, anywhere there are pollinating plants. But if they were so dumb as to fly back and forth through a massive, 60-acre death cloud ten times over the course of 12-and-a-half hours - as if there were no other route the bee could take to reach some flowers - they would have died off 120 million years ago.

Nonetheless, Krupke posits that not only are they that dumb, the bee somehow finds 100 individual neonic-drenched flowers. By using that thinking - the bee equivalent of drowning a rat in chemicals and then declaring that the chemicals killed it - his model can show that the hypothetical bee absorbed a fatal dose.

But that is impossible.

How could heavy chemical particles linger 6 to 26 feet in the air over a 60 acre field for half a day? Gravity makes that impossible, not to mention if there is any wind.

That said, “dusting” is a real thing. Planting equipment kicks up seed treatment particles as the machinery seeds drills seeds into the ground. Krupke’s old work demonstrating the potential danger to bees of neonic planter dust built his reputation.  Unfortunately, his data remain trapped in the past. Farmers don't want dusting any more than we do so simple steps like exhaust deflectors on planting machines have significantly reduced dustdrift. New lubricating agents are used to smooth the flow of seeds through the machines. And improved communications between farmers and beekeepers insure beehives are relocated in those few weeks while fields are planted.

Krupke ignores all of that and uses old measurements, to ignore all the progress farmers and industry have made in minimizing the dusting effect. These factors should have been taken into account if this were a serious, impartial look at bee health.

While one can quibble over the assumptions in the model, the next part of the study leaves no doubt about the intention: he says farmers don't need to fix the equipment they already fixed in order to prevent dusting...because neonics are essentially useless. This was based on data gathered from threeyears of field experiments on small corn patches in Indiana.

The people who grow millions of acres corn for a living know this conclusion is wrong. It takes a certain level of arrogance for a college professor to suggest he knows more about growing corn than every farmer in the country. There are few occupations more results-oriented and practical than farming, farmers put their money where the the evidence is every time they buy treated seeds. We know this is true: if a farmer concocts an impractical hypothesis and then acts on it, he goes out of business. When a college professor does the same, he gets mainstream media attention and a speaking tour paid for by Organic Consumers Association.

Research sides with farmers. AgInfomatics calculated that the value of neonics to U.S. corn farmers was $721 million a year, which more closely reflects the way real farmers feel about seed treatments.

The U.S. Department of Agriculture also disputes the premise of Krupke's claim. Since pretty much every U.S. corn and soybean farmer relies on neonics, these death clouds — if real — would be everywhere, and honeybees would have been decimated. Just the opposite is true. The latest USDAnumbers show honeybee colony numbers are at 2.8 million — the highest they have been since before neonics were available to farmers.