Secrets of potato blight evolution could help farmers fight back

Scientists have discovered vital clues as to how the pathogen responsible for the Irish potato famine adapted to spread between different plant species.

Researchers at Oxford University and The Sainsbury Laboratory (Norwich, UK) looked in unprecedented detail at how Phytophthora infestans, a pathogen that continues to blight potatoes and tomatoes today, evolved to target other plants.

The study, published today in the journal Science, is the first to show how pathogens switch from targeting one species to another through changes at the molecular level. Researchers examined the biochemical differences between Phytophthora infestans and sister species Phytophthora mirabilis, a pathogen that split from P. infestans around 1300 years ago to target the Mirabilis jalapa plant, commonly known as the four o'clock flower. They found that each pathogen species secretes specialized substances to shut down the defences of their target hosts.

'Plants have these enzymes called proteases that play a key role in their defence systems,' said Dr Renier van der Hoorn, co-author of the study from Oxford University's Department of Plant Sciences. 'When a plant becomes infected, proteases help plants to attack the invading pathogens and trigger immune responses. P. infestans secretes substances called effectors that disable proteases in potatoes and tomatoes. These are highly specialized to block specific proteases in the host plant, fitting like a key into a lock.' 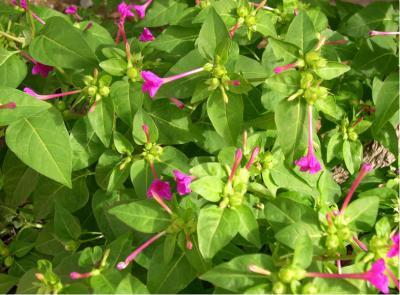 Mirabilis jalapa (the four o'clock flower). This plant is the host of Phytophthora mirabilis, the sister species of the Irish potato famine pathogen Phytophthora infestans.

'For the first time, we have found a direct molecular mechanism underpinning the change in host specialisation,' said Dr van der Hoorn. 'We looked at specialisation in the blight pathogens' secret weapon, a key family of effectors called 'EPIC' that can pass through plants' defences undetected to disable the proteases. The EPIC effectors secreted by P. infestans have evolved to fit the structure of potato proteases just as P. mirabilis has evolved effectors that fit four o'clock proteases.

'If we could breed plants with proteases that can detect these stealthy EPIC effectors, we could prevent them from 'sneaking in' and thus make more resistant plants. Within the next decade, we plan to exploit the specialized nature of these effectors to develop proteases that are resistant to their action or can even trap them and destroy the pathogen. Potato and tomato plants with such proteases would be resistant to the blight pathogens, and combined with other resistant traits could provide another 'wall' of defence against the pathogens.' 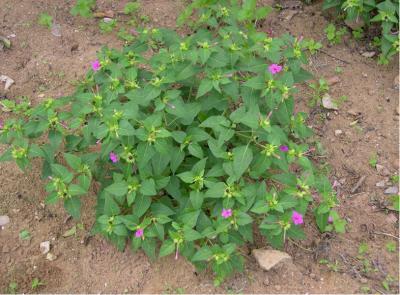 This is Mirabilis jalapa (the four o'clock flower). This plant is the host of Phytophthora mirabilis, the sister species of the Irish potato famine pathogen Phytophthora infestans.