Have you ever noticed the way water flows around boulders in a fast-moving river, creating areas of stillness and intense motion? What if those forces of fluid flow could be controlled at the smallest levels?

In May 2013, researchers from UCLA, Iowa State and Princeton reported results in Nature Communications about a new way of sculpting tailor-made fluid flows by placing tiny pillars in microfluidic channels. By altering the speed of the fluid, and stacking many pillars, with different widths, placements and orientations, in the fluid's path, they showed that it is possible to create an impressive array of controlled flows.

Why does this matter?

Because such a method will allow clinicians to separate white blood cells from other cells in a blood sample, increase mixing in industrial applications, and more quickly perform lab-on-a-chip-type operations, like DNA sequencing and chemical detection. Each of these could form the foundation for a multi-million dollar industry. Together, they could revolutionize microfluidics.

"Most microfluidic flow is at a very low speed," said Baskar Ganapathysubramaniam, assistant professor of mechanical engineering at Iowa State and one of the lead researchers. "At that speed, the flow hugs the cylinder and there's fore-aft symmetry. Whatever's happening upstream is exactly mirrored downstream. But if you increase the speed — or more technically, the Reynolds number — slightly, you can break this symmetry and get wakes, vortices, and non-trivial deformations." All of which create distinct flows.

Hashing out the idea with Dino Di Carlo, associate professor of bioengineering at UCLA, the two researchers asked themselves if they could control the flow of fluids in microfluidic channels by placing pillars in specific locations in the path. Using both experimental methods and numerical simulations, they explored the possibilities offered by this approach and found that they could indeed create a range of predictable flows.

"Each pillar has a unique deformation signature to it," Ganapathysubramaniam said. "By stacking these pillars together, we can create an astounding variety of deformations, and these can be tuned for specific purposes."

"Engineering tools like this allow a scientists to easily develop and manipulate a flow to a shape of their interest," Di Carlo said. "There hasn't been that platform available in the fluids community." 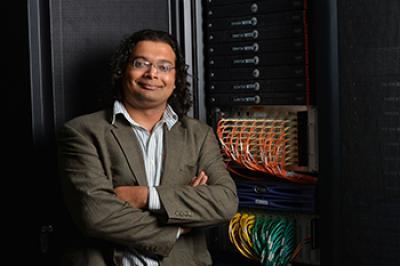 The equations used to determine the fluid flows are fairly straightforward, but the number of configurations needed to solve the problem required them to use the Ranger supercomputer at the Texas Advanced Computing Center (TACC). Ranger, funded by the National Science Foundation (NSF), served the national open science community for five years and was replaced by Stampede (the sixth most powerful supercomputer in the world) in January 2013.

"Each of these gives us one transformation and together, they form what we call a library of transformations," DiCarlo described.

With this method, Ganapathysubramaniam says it's possible to create a sequence of pillars that would push white cells to the boundaries of a channel to separate them, and then return them to the center to be recaptured. He is also excited to study the potential of pillars to enhance mixing, which would be useful for removing heat from microprocessor fabrication as well as nano- and micro-scale controlled manufacturing.

Eventually, DiCarlo and Ganapathysubramanian want to crowd-source the identification of critical flow transportations that will have implications to industry.

"Once we have the library, we envision creating a video game where we ask the player to design a specific kind of flow transformation," Ganapathysubramaniam explained. "They pick different pillars, stack them together, and see if they can get that configuration."

It's this kind of out-of-the-box thinking that characterizes the Iowa State scientist's research. Recently, partnering with Manish Parashar, the director of the Rutgers Discovery Informatics Institute (RDI2) at Rutgers University, and with Rutgers research professor Jaroslaw Zola, Ganapathysubramaniam undertook another experiment typical of his knack for creative problem-solving.

Using Federated Computing enabled by CometCloud, the project brought together a team of researchers with access to 10 supercomputers at six high performance computing (HPC) centers across three continents to continue and extend Ganapathysubramaniam's microfluidics simulations. The consortium included TACC's new Stampede system, as well as resources from the Department of Energy, FutureGrid, and international HPC centers.

Using the Comet Cloud, the researchers ran 12,845 flow simulations, consuming more than 2.5 million core-hours and generating 400 gigabytes of data over the course of 16 days. [Initial results of the work are published on the Comet Cloud website and a paper about the project is under review.]

"The experiment allowed us to explore an alternate paradigm for doing computational science and demonstrate that we can support applications using this paradigm," Parashar said. "Many applications have a similar workflow so this could be a model for supporting researchers without all of them going to one resource or another. This could be used to provide compute resources to a wide-range of applications."

The computations enabled by CometCloud brought Ganapathysubramaniam halfway to his dream of a complete library of microscopic fluid flows. However, the entire library would take much more computing. Fortunately, supercomputers are getting relentlessly faster, and with new technologies come new opportunities for industry, science and medicine. 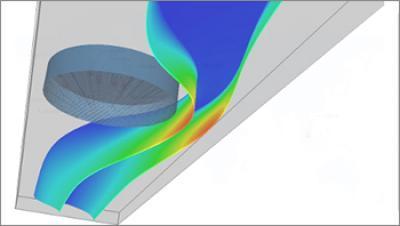 Placing a micropillar in a micro-channel causes flow to fundamentally change. By varying the size and location of the pillar, a rich variety of flows can be created. The figure shows a simulation of streamlines for one particular configuration run on TACC's Stampede supercomputer.