Scientists identify the signature of aging in the brain

How the brain ages is still largely an open question – in part because this organ is mostly insulated from direct contact with other systems in the body, including the blood and immune systems. In research that was recently published in Science, Weizmann Institute researchers Prof. Michal Schwartz of the Neurobiology Department and Dr. Ido Amit of Immunology Department found evidence of a unique "signature" that may be the "missing link" between cognitive decline and aging. The scientists believe that this discovery may lead, in the future, to treatments that can slow or reverse cognitive decline in older people.

Until a decade ago, scientific dogma held that the blood-brain barrier prevents the blood-borne immune cells from attacking and destroying brain tissue. Yet in a long series of studies, Schwartz's group had shown that the immune system actually plays an important role both in healing the brain after injury and in maintaining the brain's normal functioning. They have found that this brain-immune interaction occurs across a barrier that is actually a unique interface within the brain's territory. 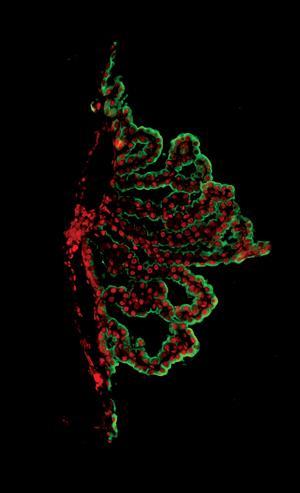 This is an immunofluorescence microscope image of the choroid plexus. Epithelial cells are in green and chemokine proteins (CXCL10) are in red

This interface, known as the choroid plexus, is found in each of the brain's four ventricles, and it separates the blood from the cerebrospinal fluid. Schwartz: "The choroid plexus acts as a 'remote control' for the immune system to affect brain activity. Biochemical 'danger' signals released from the brain are sensed through this interface; in turn, blood-borne immune cells assist by communicating with the choroid plexus. This cross-talk is important for preserving cognitive abilities and promoting the generation of new brain cells." This finding led Schwartz and her group to suggest that cognitive decline over the years may be connected not only to one's "chronological age" but also to one's "immunological age," that is, changes in immune function over time might contribute to changes in brain function – not necessarily in step with the count of one's years.

To test this theory, Schwartz and research students Kuti Baruch and Aleksandra Deczkowska teamed up with Amit and his research group in the Immunology Department. The researchers used next-generation sequencing technology to map changes in gene expression in 11 different organs, including the choroid plexus, in both young and aged mice, to identify and compare pathways involved in the aging process. That is how they identified a strikingly unique "signature of aging" that exists solely in the choroid plexus – not in the other organs. They discovered that one of the main elements of this signature was interferon beta – a protein that the body normally produces to fight viral infection. This protein appears to have a negative effect on the brain: When the researchers injected an antibody that blocks interferon beta activity into the cerebrospinal fluid of the older mice, their cognitive abilities were restored, as was their ability to form new brain cells. The scientists were also able to identify this unique signature in elderly human brains. The scientists hope that this finding may, in the future, help prevent or reverse cognitive decline in old age, by finding ways to rejuvenate the "immunological age" of the brain.