Scientists discover the miracle of how geckos move, cling to ceilings

CORVALLIS, Ore. – Researchers at Oregon State University have developed a model that explains how geckos, as well as spiders and some insects, can run up and down walls, cling to ceilings, and seemingly defy gravity with such effortless grace.

The solution, outlined today in the Journal of Applied Physics, is a remarkable mechanism in the toes of geckos that use tiny, branched hairs called "seta" that can instantly turn their stickiness on and off, and even "unstick" their feet without using any energy.

These extraordinary hairs contribute to the ability of geckos to run, evade predators, and protect its very life and survival. In essence, a gecko never has a bad hair day.

"These are really fascinating nanoscale systems and forces at work," said Alex Greaney, an assistant professor in the OSU College of Engineering. "It's based not just on the nature of the seta but the canted angles and flexibility they have, and ability to work under a wide range of loading conditions."

Even more compelling, Greaney said, is the minimal amount of energy expended in the whole process, as a gecko can race across a ceiling with millions of little hairy contact points on its feet turning sticky and non-sticky in a precisely integrated process. This "smart" adhesion system allows them to run at 20 body-lengths per second, and, hanging from a ceiling, the forces provided by the seta could actually support 50 times the body weight of the gecko. 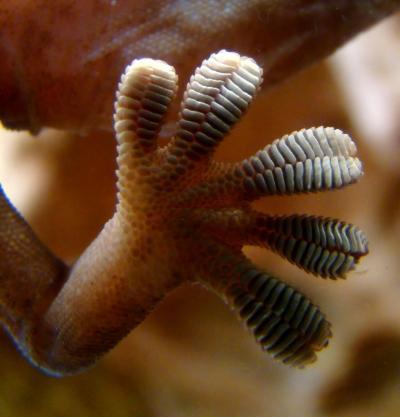 Geckos' feet are nonsticky by default, but they can activate 'stickiness' through application of a small shear force, according to research from Oregon State University.

In continued research the scientists want to find out more about this mechanism to recover stored energy, to see if more practical uses could be made of it – better adhesives, for instance, or robots that can use some of these principles for improved performance or use in extreme environments.

The adhesion system used by geckos and insects have literally been studied for thousands of years, Greaney said, and it was only in 2000 that experts proved they are taking advantage of a concept in physics called van der Waals forces, a type of weak intermolecular force.

Geckos' feet are, by default, non-sticky, but the stickiness can be activated by a small shear force to produce this surprisingly tough form of adhesion. 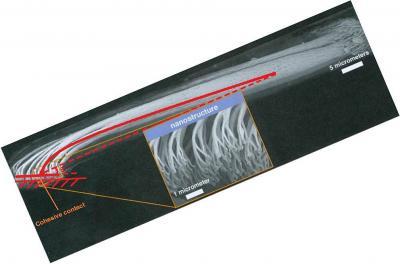 The adhesion of geckos' feet is made possible by millions of tiny 'seta' that function at the nanoscale to turn stickiness on and off.