Scientists discover microbiome that may be responsible for male reproductive disorders

Research shows that bacteria can be beneficial to body processes such as digestion; however, some bacteria housed in the human body may cause disease. These specialized communities of bacteria in the body are known as microbiomes. Now, researchers at the University of Missouri have discovered a microbiome in the male reproductive tract in mice that harbors harmful bacteria that may negatively influence reproductive function and health of males. Bacteria found in this specialized microbiome may pass from father to offspring, where it may program later disease risk, such as obesity. In fathers, some bacteria may initiate diseases, such as prostatitis, that can result in later prostate cancer.

"Microbiomes are influenced by many factors such as temperature, the pH or acidity of the environment and whether there's a food source to promote bacterial growth," said Cheryl Rosenfeld, an associate professor of biomedical sciences in the MU College of Veterinary Medicine and an investigator in the Bond Life Sciences Center. "The male reproductive tract includes a unique niche in which bacteria thrive, i.e. the seminal vesicles. These tubular glands produce seminal fluid, are located in an environment that is temperature controlled and is rich in carbohydrates needed to feed bacteria. Our team set out to isolate this potential microbiome and analyze whether it could harbor harmful bacteria."

Rosenfeld and her team, which included Angela Javurek, a former undergraduate researcher in the Bond Life Sciences Center, collected and isolated seminal fluid and vesicles from male mice. Then, researchers sequenced the DNA of the bacteria located in the reproductive organs and fluid. 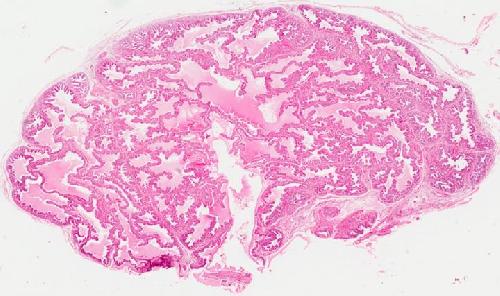 The histological view of the seminal vesicles shows the glands and fluid where bacteria can live. Credit: Credit: Cheryl Rosenfeld

The team then engaged the MU Informatics Research Core Facility (ICRF), a specialized and sophisticated computational biology group to help analyze the data. Established in 2009 by the Missouri Life Science Trust Fund, the ICRF provides a fundamental tool to life sciences researchers in Missouri -- analyzing the overwhelming amount of data that are produced with large research projects. In Rosenfeld's study, Scott Givan, the associate director of the IRCF, and William Spollen, an expert programmer analyst, employed specialized computer programs that helped narrow and identify the microorganisms.

"The data showed that the bacterial composition found in the male reproductive tract contained potentially detrimental bacteria that can be transmitted to female reproductive partners and offspring," Rosenfeld said. "The bacteria also could be the causative agent of chronic prostatitis, a possible precursor to prostate cancer in males," "Additionally, further testing showed this bacterial community contains the bacteria that may cause obesity in rats. Understanding how these genetic and environmental factors influence this particular microbiome could help in understanding how possible developmental disorders and diseases are passed down by fathers to their offspring."

The study, "Discovery of a Novel Seminal Fluid Microbiome and Influence of Estrogen Receptor Alpha Genetic Status," recently was published in Scientific Reports, a journal published by Nature.