Scientists discover how we play memories in fast forward

Scientists at The University of Texas at Austin have discovered a mechanism that may explain how the brain can recall nearly all of what happened on a recent afternoon -- or make a thorough plan for how to spend an upcoming afternoon -- in a fraction of the time it takes to live out the experience. The breakthrough in understanding a previously unknown function in the brain has implications for research into schizophrenia, autism spectrum disorders, Alzheimer's disease and other disorders where real experiences and ones that exist only in the mind can become distorted.

The newly discovered mechanism, which compresses information needed for memory retrieval, imagination or planning and encodes it on a brain wave frequency that's separate from the one used for recording real-time experiences, is described in a cover article in the Jan. 20 print edition of the journal Neuron.

Brain cells share different kinds of information with one another using a variety of different brain waves, analogous to the way radio stations broadcast on different frequencies. Laura Colgin, an assistant professor of neuroscience, Chenguang Zheng, a postdoctoral researcher, and their colleagues found that one of these frequencies allows us to play back memories -- or envision future activities -- in fast forward. 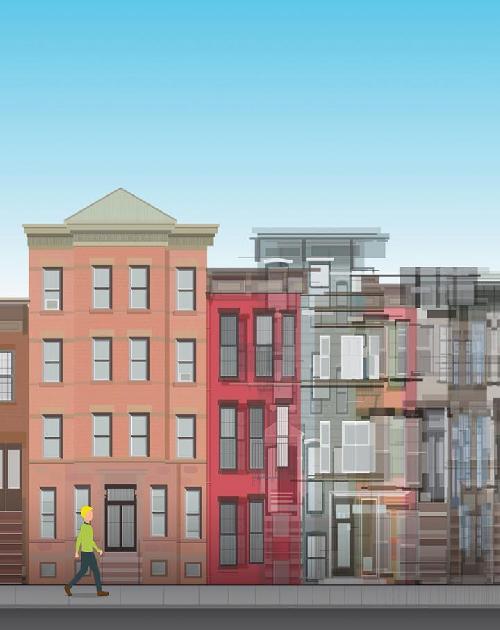 When we think about past or future events, we use a special brain wave frequency that allows us to play them in fast forward, although at a lower resolution. Credit: Illustration by Juliette Pepperell

"The reason we're excited about it is that we think this mechanism can help explain how you can imagine a sequence of events you're about to do in a time-compressed manner," says Colgin. "You can plan out those events and think about the sequences of actions you'll do. And all of that happens on a faster time scale when you're imagining it than when you actually go and do those things."

In the brain, fast gamma rhythms encode memories about things that are happening right now; these waves come rapidly one after another as the brain processes high-resolution information in real time. The scientists learned that slow gamma rhythms -- used to retrieve memories of the past, as well as imagine and plan for the future -- store more information on their longer waves, contributing to the fast-forward effect as the mind processes many data points with each wave.

Mental compression turns out to be similar to what happens in a computer when you compress a file. Just like digital compression, when you replay a mental memory or imagine an upcoming sequence of events, these thoughts will have less of the rich detail found in the source material. The finding has implications for medicine as well as for criminal justice and other areas where memory reliability can be at issue.

Colgin notes that the research could also explain why people with schizophrenia who are experiencing disrupted gamma rhythms have a hard time distinguishing between imagined and real experiences.

"Maybe they are transmitting their own imagined thoughts on the wrong frequency, the one usually reserved for things that are really happening," says Colgin. "That could have terrible consequences."

Next, the researchers plan to use animals with neurological disorders similar to autism spectrum disorders and Alzheimer's disease in humans to better understand what role this mechanism plays and explore ways to counteract it.

source: University of Texas at Austin