An international team led by scientists at the University of Arizona and the U.S. Department of Agriculture has discovered what happens on a molecular basis in insects that evolved resistance to genetically engineered cotton plants. Their findings, reported in the May 19 issue of the journal PLOS ONE, shed light on how the global caterpillar pest called pink bollworm overcomes biotech cotton, which was designed to make an insect-killing bacterial protein called Bt toxin. The results could have major impacts for managing pest resistance to Bt crops.

"Bt crops have had major benefits for society," said Jeffrey Fabrick, the lead author of the study and a research entomologist at the USDA Agricultural Research Service in Maricopa, Arizona. "By understanding how insects adapt to Bt crops we can devise better strategies to delay the evolution of resistance and extend these benefits."

"Many mechanisms of resistance to Bt proteins have been proposed and studied in the lab, but this is the first analysis of the molecular genetic basis of severe pest resistance to a Bt crop in the field," said Bruce Tabashnik, one of the paper's authors and the head of the Department of Entomology in the UA College of Agriculture and Life Sciences. He also is a member of the UA's BIO5 Institute.

Based on laboratory experiments aimed at determining the molecular mechanisms involved, scientists knew that pink bollworm can evolve resistance against the Bt toxin, but they had to go all the way to India to observe this happening in the field. 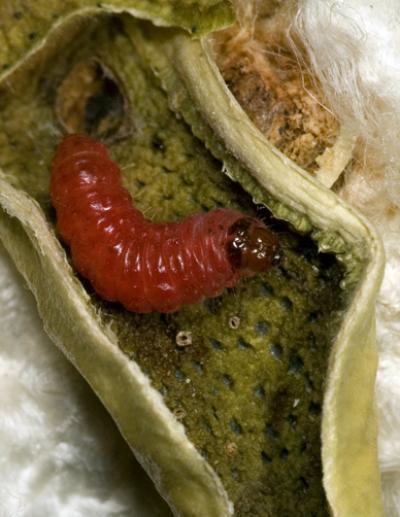 A caterpillar of pink bollworm, a global pest that evolved resistance to Bt cotton in India but the not in the U.S., emerges after devouring a boll of cotton.

Farmers in the U.S., but not in India, adopted tactics designed to slow evolution of resistance in pink bollworm. Scientists from the UA and the U.S. Department of Agriculture worked closely with cotton growers in Arizona to develop and implement resistance management strategies such as providing "refuges" of standard cotton plants that do not produce Bt proteins and releasing sterile pink bollworm moths. Planting refuges near Bt crops allows susceptible insects to survive and reproduce and thus reduces the chances that two resistant insects will mate with each other and produce resistant offspring. Similarly, mass release of sterile moths also makes it less likely for two resistant individuals to encounter each other and mate.

As a result, pink bollworm has been all but eradicated in the southwestern U.S. Suppression of this pest with Bt cotton is the cornerstone of an integrated pest management program that has allowed Arizona cotton growers to reduce broad spectrum insecticide use by 80 percent, saving them over $10 million annually. In the U.S., pink bollworm populations have not evolved resistance to Bt toxins in the wild. However, resistant pink bollworm populations have emerged in India, which grows the most Bt cotton of any country in the world.

Crops genetically engineered to produce proteins from the bacterium Bacillus thuringiensis – or Bt – were introduced in 1996 and planted on more than 180 million acres worldwide during 2013. Organic growers have used Bt proteins in sprays for decades because they kill certain pests but are not toxic to people and most other organisms. Pest control with Bt proteins – either in sprays or genetically engineered crops – reduces reliance on chemical insecticides. Although Bt proteins provide environmental and economic benefits, these benefits are cut short when pests evolve resistance.

The emergence of resistant pink bollworm in India provided the researchers an opportunity to test the hypothesis that insects in the field would evolve resistance to Bt toxin by the same genetic mechanism found previously in the lab. In the lab strains, the scientists had identified mutations in a gene encoding a protein called cadherin. Binding of Bt toxin to cadherin is an essential step in the intoxication process. Mutations that disrupt cadherin block this binding, which leaves the insect unscathed by the Bt toxin.

"We wanted to see if field-resistant pink bollworm from India harbored these same changes in the cadherin gene," Fabrick said. He said that by collaborating with Indian scientists, "we discovered that the same cadherin gene is associated with the resistance in India, but the mutations are different and much more numerous than the ones we found in lab-selected pink bollworm from Arizona." 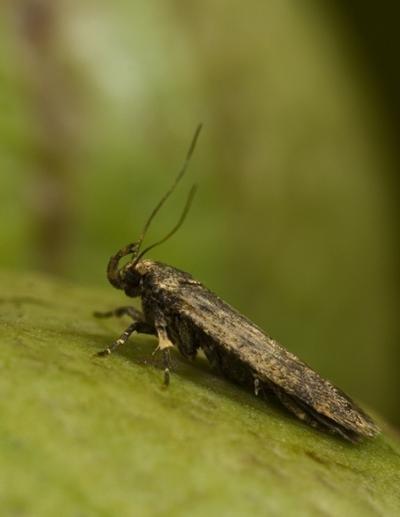 Tabashnik added: "In 17 years of research and screening more than 10,000 individuals from Arizona, we identified four cadherin-based resistance mutations. And in just eight individuals from India, we found 19 different cadherin variants that confer resistance. It blew our minds."

Sequencing the DNA of resistant pink bollworm collected from the field in India, the team found that the insects produce remarkably diverse disrupted variants of cadherin. The researchers learned that the astonishing diversity of cadherin in pink bollworm from India is caused by alternative splicing, a novel mechanism of resistance that allows a single DNA sequence to code for many variants of a protein. "Our findings represent the first example of alternative splicing associated with Bt resistance that evolved in the field," said Fabrick, who is also an adjunct scientist in the Department of Entomology at UA.

Mario Soberón, a Bt expert at the Universidad Nacional Autónoma de México in Cuernavaca who was not an author of the study, commented, "This is a neat example of the diverse mechanisms insect possess to evolve resistance. An important implication is that DNA screening would not be efficient for monitoring resistance of pink bollworm to Bt toxins." This is a field of Bt cotton in Arizona.