DURHAM, N.C. -- Touch a hot stove, and your fingers will recoil in pain because your skin carries tiny temperature sensors that detect heat and send a message to your brain saying, "Ouch! That's hot! Let go!"

The pain is real and it serves a purpose, otherwise we'd suffer greater injury. But for many people with chronic pain, that signal keeps getting sent for months or years, even when there is no clear cause.

Now, researchers have discovered the structure of a protein linked to pain and heat perception. It is an ion channel in the cell surface membrane called TRPV2. This port-like structure plays a role in a number of disparate biological processes, such as maintaining a healthy heart, helping dispose of pathogens and inducing cell death in certain cancers. 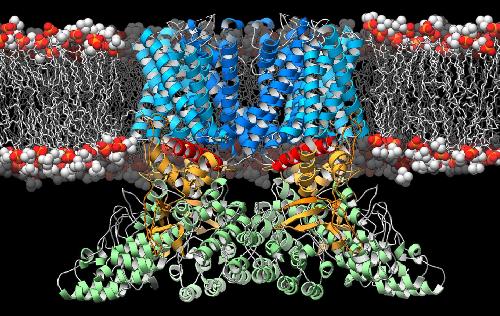 A ribbon diagram depicting the structure of the TRPV2 ion channel (blue, yellow, green) as it lies embedded in the cell membrane (orange and white). This ion channel is a temperature sensor involved in the perception of pain and heat, and therapies targeting it could one day alleviate suffering in people afflicted with chronic pain. Credit: Mark A. Herzik Jr., Scripps Research Institute

The study, published January 18, 2016 in Nature Structural Biology and Molecular Biology, is an important step toward new therapies that target pain receptors. More than 100 million Americans suffer from some sort of severe or chronic pain, a condition that is underdiagnosed and poorly treated.

"These receptors are gaining particular attention because they are so critical to how we sense and respond to our environment," said senior study author Seok-Yong Lee, Ph.D., assistant professor of biochemistry at Duke University School of Medicine. "Our results give a hint as to how one receptor works, a necessary component for developing new treatments for a variety of conditions involving sensation."

Ion channels are scattered across all cell membranes and act as gatekeepers of information flowing in and out of cells. In the case of TRPV (Transient Receptor Potential Vanilloid, pronounced trip-vee), this information takes the form of calcium ions. Like the turning of a valve, TRPV receptors open in response to noxious heat or other stimuli, allowing an influx of calcium ions that convey a signal through the nervous system to the brain.

But how do such valves open and close? Structural biologists like Lee believe that deducing the schematics of these valves can give them the blueprint for designing drugs that target ion channels. Recently, researchers solved the structure of the first protein in the TRPV superfamily, TRPV1. Their results gave a picture of the protein in two different states -- when it was open to the flow of ions and when it was closed off.

In this study, Lee wanted to determine the structure of the next in line, TRPV2. Unlike TRPV1, which is only found in the nervous system, TRPV2 is present throughout the body and has been implicated in a variety of human conditions, including heart disease, the immune response, and cancer. But taking a picture of this protein was harder than it sounds. It took Lee several years to work out the right conditions to keep the protein well dispersed and stable in biochemical solution, so it could be flash frozen and visualized by a technique known as cryo-electron microscopy.

Gabriel Lander, a biologist at the Scripps Research Institute in La Jolla, Calif., used this advanced technique to determine the structure of TRPV2 at near-atomic resolution. Cryo-electron microscopy works much like regular electron microscopy: electrons are shot at the sample, refracting or bouncing back from dense areas and passing through empty ones. In all, Lander took about half a million 2D images, which he then ran through a sophisticated computer program to generate a 3D picture of the protein.

When the researchers compared the structure of TRPV2 to TRPV1, they were surprised to find that it didn't fit the mold for either the open or closed confirmation of the closely related protein. Rather, it seemed to inhabit an in-between stage, suggesting a third state where the channel becomes desensitized to repeated stimuli, much like a person might get used to the beeps of a faulty smoke detector. Lee thinks that studying this desensitized state could point to a way to alleviate chronic pain in people.

Currently, Lee is trying to create biochemical conditions that will coax TRPV2 into other conformations so that he and his colleagues can determine its structure when it is open or closed. He also plans to find the structures of other proteins in the TRPV superfamily.

"If we can obtain these different conformations, we can generate a series of snapshots -- perhaps even an entire movie -- that will allow us to understand how this machine operates," said Lee.