Johns Hopkins scientists have developed a simplified, cheaper, all-purpose method they say can be used by scientists around the globe to more safely turn blood cells into heart cells. The method is virus-free and produces heart cells that beat with nearly 100 percent efficiency, they claim.

"We took the recipe for this process from a complex minestrone to a simple miso soup," says Elias Zambidis, M.D., Ph.D., assistant professor of oncology and pediatrics at the Johns Hopkins Institute for Cell Engineering and the Kimmel Cancer Center.

Zambidis says, "many scientists previously thought that a nonviral method of inducing blood cells to turn into highly functioning cardiac cells was not within reach, but "we've found a way to do it very efficiently and we want other scientists to test the method in their own labs." However, he cautions that the cells are not yet ready for human testing.

To get stem cells taken from one source (such as blood) and develop them into a cell of another type (such as heart), scientists generally use viruses to deliver a package of genes into cells to, first, get them to turn into stem cells. However, viruses can mutate genes and initiate cancers in newly transformed cells. To insert the genes without using a virus, Zambidis' team turned to plasmids, rings of DNA that replicate briefly inside cells and eventually degrade.

Adding to the complexity of coaxing stem cells into other cell types is the expensive and varied recipe of growth factors, nutrients and conditions that bathe stem cells during their transformation. The recipe of this "broth" differs from lab to lab and cell line to cell line.

Reporting in the April 8 issue of Public Library of Science ONE (PLoS ONE), Zambidis' team described what he called a "painstaking, two-year process" to simplify the recipe and environmental conditions that house cells undergoing transformation into heart cells. They found that their recipe worked consistently for at least 11 different stem cell lines tested and worked equally well for the more controversial embryonic stem cells, as well as stem cell lines generated from adult blood stem cells, their main focus.

The process began with Johns Hopkins postdoctoral scientist Paul Burridge, Ph.D., who studied some 30 papers on techniques to create cardiac cells. He drew charts of 48 different variables used to create heart cells, including buffers, enzymes, growth factors, timing, and the size of compartments in cell culture plates. After testing hundreds of combinations of these variables, Burridge narrowed the choices down to between four to nine essential ingredients at each of three stages of cardiac development.

Beyond simplification, an added benefit is reduced cost. Burridge used a cheaper growth media that is one-tenth the price of standard media for these cells at $250 per bottle lasting about one week. 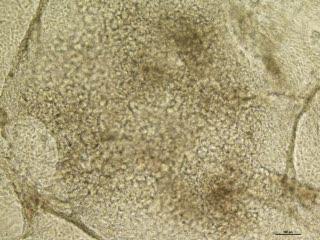 This is a video of a "beating" cardiomyocyte.

Zambidis says that he wants other scientists to test the method on their stem cell lines, but also notes that the growth "soup" is still a work in progress. "We have recently optimized the conditions for complete removal of the fetal bovine serum from one brief step of the procedure – it's made from an animal product and could introduce unwanted viruses," he says.

In their experiments with the new growth medium, the Hopkins team began with cord blood stem cells and a plasmid to transfer seven genes into the stem cells. They delivered an electric pulse to the cells, making tiny holes in the surface through which plasmids can slip inside. Once inside, the plasmids trigger the cells to revert to a more primitive cell state that can be coaxed into various cell types. At this stage, the cells are called induced pluripotent stem cells (iPSC).

Burridge then bathed the newly formed iPSCs in the now simplified recipe of growth media, which they named "universal cardiac differentiation system." The growth media recipe is specific to creating cardiac cells from any iPSC line.

Finally, they incubated the cells in containers that removed oxygen down to a quarter of ordinary atmospheric levels. "The idea is to recreate conditions experienced by an embryo when these primitive cells are developing into different cell types," says Burridge. They also added a chemical called PVA, which works like glue to make cells stick together.

Nine days later, the nonviral iPSCs turned into functional, beating cardiac cells, each the size of a needlepoint.

Burridge manually counted how often iPSCs formed into cardiac cells in petri dishes by peering into a microscope and identifying each beating cluster of cells. In each of 11 cell lines tested, each plate of cells had an average of 94.5 percent beating heart cells. "Most scientists get 10 percent efficiency for IPSC lines if they're lucky," says Zambidis.

Zambidis and Burridge also worked with Johns Hopkins University bioengineering experts to apply a miniversion of an electrocardiograph to the cells, which tests how cardiac cells use calcium and transmit a voltage. The resulting rhythm showed characteristic pulses seen in a normal human heart.

Virus-free, iPSC-derived cardiac cells could be used in laboratories to test drugs that treat arrhythmia and other conditions. Eventually, bioengineers could develop grafts of the cells that are implanted into patients who suffered heart attacks.