Researchers are using fibres from fishing line and sewing thread to create inexpensive artificial muscles that could be used in medical devices, humanoid robots, prosthetic limbs, or woven into fabrics.

In a study published today in Science, international researchers, including University of British Columbia Electrical and Computer Engineering professor John Madden and PhD candidate Seyed Mohammad Mirvakili, detail how they created inexpensive artificial muscles that generate far more force and power than human or animal muscles of the same size.

"In terms of the strength and power of the artificial muscle, we found that it can quickly lift weights 100 times heavier than a same-sized human muscle can, in a single contraction," says Madden. "It also has a higher power output for its weight than that of an automobile combustion engine." 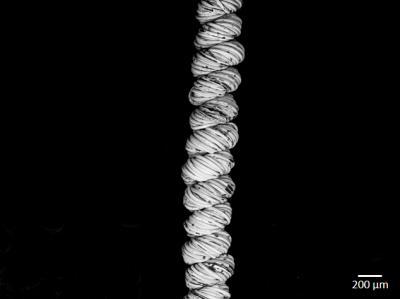 This is a scanning electron microscope image of metal coated nylon fibers used in design of the new artificial muscle.

Artificial muscles have been made successfully out of materials like metal wires and carbon nanotubes in the past. But researchers and device makers have found these artificial muscles expensive to fabricate and difficult to control.

Madden and his colleagues used high-strength polymer fibres made from polyethylene and nylon, the common materials in fishing lines and sewing thread. The fibres were twisted into tight coils – like you would twist the rubber band of a model toy airplane – to create an artificial muscle that could contract and relax.

The artificial muscles contract and relax in response to changes in temperature, which can be controlled by an electrical heating element. This system has been demonstrated by using such muscles to manipulate surgical forceps. The artificial muscles may also find use in robots and low cost devices that help those with impaired mobility, the researchers say.