Scientists could save thousands of pounds with student's DIY microscope

Expensive tests for measuring everything from sperm motility to cancer diagnosis have just been made hundreds of thousands of pounds cheaper by a PhD student from Brunel University London who hacked his own microscope.

Adam Lynch, from the university's College of Health and Life Sciences, created his own inverted microscope by adapting a cheap instrument he bought online to save himself time and money.

The tool is used to measure cell motility - how fast cells move from one place to another - but the high-quality equipment, used to automatically test multiple samples, can stretch to hundreds of thousands of pounds.

Now Adam has a cut-price version for a study to understand if a snail's immune system responds to chemical pollutants present in the water, which might influence the levels of transmission of Schistosome parasites from snails to humans. The team at Brunel needed the inverted microscope to see whether immune cell behaviour was affected by polluted water. But they needed more than one machine to be able to run multiple tests.

Adam, who estimates the cost of his system to be around £160 but thinks it could be made cheaper still, said: "When you're looking at motility in cells you're only interested in the data - how fast the cell gets from A to B means more than a high-resolution image. Even with a high-cost microscope you will reduce the image down so that it's just a black dot on the screen moving against a white background so that it's easier for a computer to read."

Adam realised a USB microscope he'd bought online could be clamped upside down on a table to produce the same images as the much more expensive inverted microscope.

"It worked ok as I could sort of see cells, which are about 50 micrometres long, but the images weren't fantastic," he said. "But people don't realise that you can quite easily make a high-magnification microscope, it's just a matter of getting a lens and the right angle of lighting, so when I turned off the lighting that came with the instrument and used external lights I found I could see the cells quite clearly."

Adam bought three cheap microscopes and put them together, then multiplied his output by three.

"If money is no object you can do something better but money certainly is an object and really the only way we could get meaningful data without spending a disproportionate amount of time in the lab was this."

The next step for the technology is to build a more attractive case, and to look for other applications. The technology also means that studies could be carried out in countries where diseases are rife, but resources low. 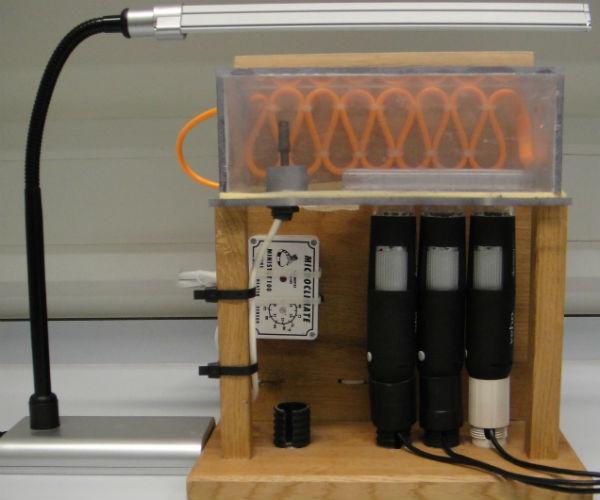 The instrument was adapted by Adam Lynch to study snail immune systems.