Scientists probe how distinct liquid organelles in cells are created 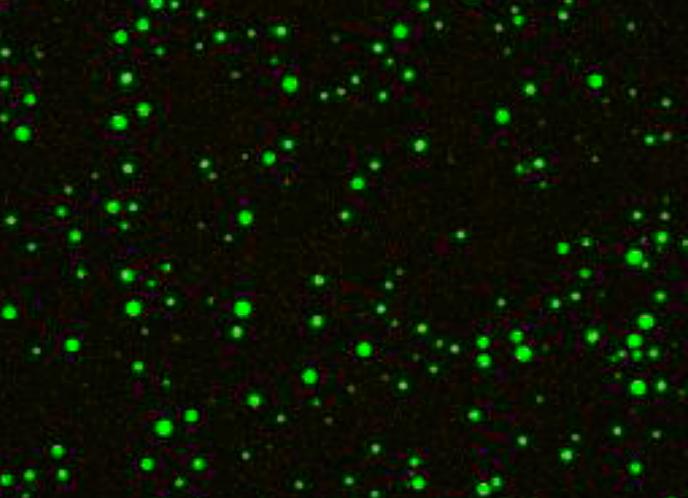 IMAGE: Like stars in the night, liquid droplets of RNA (the bright green spheres) float in a solution containing high concentrations of divalent magnesium cations. The droplets are imaged through confocal...

BUFFALO, N.Y. -- The interior of a human cell consists, in part, of a complex soup of millions of molecules.

One way these biological compounds stay organized is through membrane-less organelles (MLOs) -- wall-less liquid droplets made from proteins and RNA that clump together and stay separate from the rest of the cellular stew.

You can think of these fluid compartments as being akin to oil droplets in water. MLOs facilitate storage of molecules within cells and can serve as a center of biochemical activity, recruiting molecules needed to carry out essential cellular reactions.

Though these droplets are plentiful within cells, they represent an emerging field of study in cell biology. Little is known about how they are created and maintained with unique functionalities.

To address this knowledge gap, one University at Buffalo laboratory is using cutting-edge scientific techniques to probe the fundamental properties of how MLOs work. The research is led by Priya R. Banerjee, PhD, an assistant professor of physics in the UB College of Arts and Sciences.

In a paper published on Aug. 21 in Scientific Reports, Banerjee and colleagues report that MLOs may be highly sensitive to the level of divalent cations inside cells. This is important because divalent calcium and magnesium ions aid in cellular signaling and are vital to life.

In experiments, MLOs containing both proteins and RNA form when divalent cations were found in low concentrations. But when concentrations of these cations were high, liquid organelles holding only RNA molecules were favored. The tests were systematically performed using controlled model systems comprising protein and RNA molecules floating in a buffer solution.

"It's interesting because you haven't changed the basic ingredients," Banerjee says. "But when you alter the ionic environment, you find that these organelles are highly tunable. They 'switch' from one type to the other, with each type having a distinct internal design."

The study was led by Banerjee and Ashok Deniz, PhD, associate professor of integrative structural and computational biology at Scripps Research, a nonprofit medical research institution.

The team demonstrated that fluctuations in divalent cations can profoundly tune the liquid properties of MLOs, altering the internal environment of the droplet. This is important since cells are believed to control some MLO functionality by changing their interior design. The concept of tunable intracellular droplet organelles is currently being actively investigated in Banerjee's lab at UB.

In a separate paper published earlier in 2019, Banerjee and colleagues explored another fundamental property of MLOs: conditions that drive such droplets to switch from a fluid, liquidy state to a harder, gel-like state.

"The concept that protein and nucleic acid droplets can function as organelles in a cell has started shifting the paradigm of cell biology that is written in a textbook," Banerjee says. "Reports started emerging from several different laboratories across the world that MLOs are relevant in gene regulation, protection of cells during stress, immune response and many other biological functions, as well as diseases such as neurological disorders and cancer. Therefore, understanding how MLOs are formed, tuned and altered in diseases are of key importance in the field now."