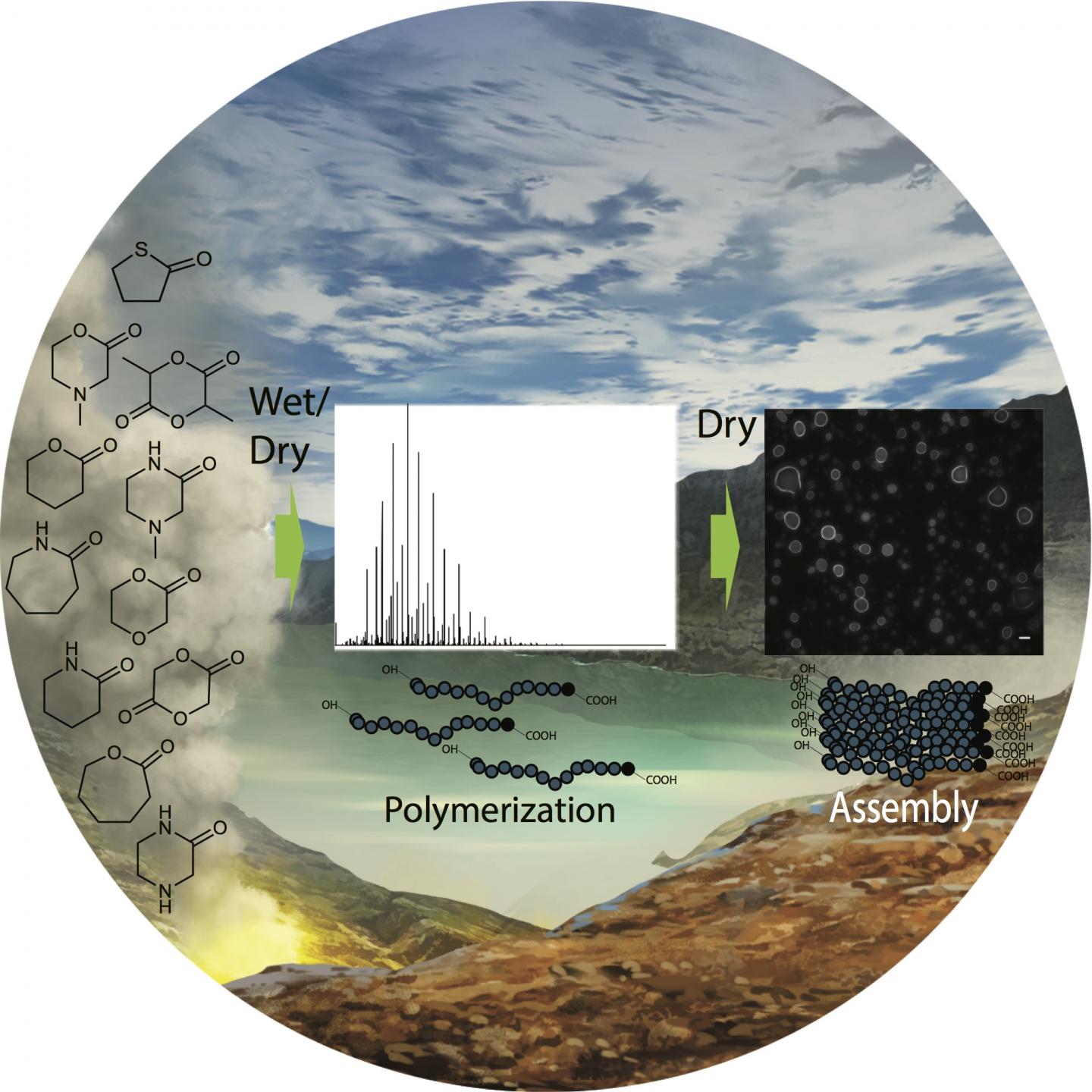 IMAGE: A new study by scholars based at the Earth-Life Science Institute at Tokyo Institute of Technology showed that non-biological chemicals produce polymers and cell-like structures under primitive Earth-like settings....

Chemists studying how life started often focus on how modern biopolymers like peptides and nucleic acids contributed, but modern biopolymers don't form easily without help from living organisms. A possible solution to this paradox is that life started using different components, and many non-biological chemicals were likely abundant in the environment. A new survey conducted by an international team of chemists from the Earth-Life Science Institute (ELSI) at Tokyo Institute of Technology and other institutes from Malaysia, the Czech Republic, the US and India, has found that a diverse set of such compounds easily form polymers under primitive environmental conditions, and some even spontaneously form cell-like structures.

Understanding how life started on Earth is one of the most challenging questions modern science attempts to explain. Scientists presently study modern organisms and try to see what aspects of their biochemistry are universal, and thus were probably present in the organisms from which they descended. The best guess is that life has thrived on Earth for at least 3.5 billion of Earth's 4.5 billion year history since the planet formed, and most scientists would say life likely began before there is good evidence for its existence. Problematically, since Earth's surface is dynamic, the earliest traces of life on Earth have not been preserved in the geological record. However, the earliest evidence for life on Earth tells us little about what the earliest organisms were made of, or what was going on inside their cells. "There is clearly a lot left to learn from prebiotic chemistry about how life may have arisen," says the study's co-author Jim Cleaves.

A hallmark of life is evolution, and the mechanisms of evolution suggest that common traits can suddenly be displaced by rare and novel mutations which allow mutant organisms to survive better and proliferate, often replacing previously common organisms very rapidly. Paleontological, ecological and laboratory evidence suggests this occurs commonly and quickly. One example is an invasive organism like the dandelion, which was introduced to the Americas from Europe and is now a common weed causing lawn-concerned homeowners to spend countless hours of effort and dollars to eradicate. Another less whimsical example is COVID-19, a virus (technically not living, but technically an organism) which was probably confined to a small population of bats for years, but suddenly spread among humans around the world. Organisms which reproduce faster than their competitors, even only slightly faster, quickly send their competitors to what Leon Trotsky termed the "ash heap of history." As most organisms which have ever existed are extinct, co-author Tony Z. Jia suggests that "to understand how modern biology emerged, it is important to study plausible non-biological chemistries or structures not currently present in modern biology which potentially went extinct as life complexified."

This idea of evolutionary replacement is pushed to an extreme when scientists try to understand the origins of life. All modern organisms have a few core commonalities: all life is cellular, life uses DNA as an information storage molecule, and uses DNA to make ribonucleic RNA as an intermediary way to make proteins. Proteins perform most of the catalysis in modern biochemistry, and they are created using a very nearly universal "code" to make them from RNA. How this code came to be is in itself enigmatic, but these deep questions point to their possibly having been a very murky period in early biological evolution ~ 4 billion years ago during which almost none of the molecular features observed in modern biochemistry were present, and few if any of the ones that were present have been carried forward.

Proteins are linear polymers of amino acids. These floppy strings of polymerised amino acids fold into unique three-dimensional shapes, forming extremely efficient catalysts which foster precise chemical reactions. In principle, many types of polymerised molecules could form similar strings and fold to form similar catalytic shapes, and synthetic chemists have already discovered many examples. "The point of this kind of study is finding functional polymers in plausibly prebiotic systems without the assistance of biology, including grad students," says co-author Irena Mamajanov.

Scientists have found many ways to make biological organic compounds without the intervention of biology, and these mechanisms help explain these compounds' presence in samples like carbonaceous meteorites, which are relics of the early solar system, and which scientists don't think ever hosted life. These primordial meteorite samples also contain many other types of molecules which could have formed complex folded polymers like proteins, which could have helped steer primitive chemistry. Proteins, by virtue of their folding and catalysis mediate much of the complex biochemical evolution observed in living systems. The ELSI team reasoned that alternative polymers could have helped this occur before the coding between DNA and protein evolved. "Perhaps we cannot reverse-engineer the origin of life; it may be more productive to try and build it from scratch, and not necessarily using modern biomolecules. There were large reservoirs of non-biological chemicals that existed on the primeval Earth. How they helped in the formation of life-as-we-know-it is what we are interested in," says co-author Kuhan Chandru.

The ELSI team did something simple yet profound: they took a large set of structurally diverse small organic molecules which could plausibly be made by prebiotic processes and tried to see if they could form polymers when evaporated from dilute solution. To their surprise, they found many of the primitive compounds could, though they also found some of them decomposed rapidly. This simple criterion, whether a compound is able to be dried without decomposing, may have been one of the earliest evolutionary selection pressures for primordial molecules.

The team conducted one further simple test. They took these dried reactions, added water and looked at them under a microscope. To their surprise, some of the products of these reaction formed cell-sized compartments. That simple starting materials containing 10 to 20 atoms can be converted to self-organised cell-like aggregates containing millions of atoms provides startling insight into how simple chemistry may have led to complex chemistry bordering on the kind of complexity associated with living systems, while not using modern biochemicals.

"We didn't test every possible compound, but we tested a lot of possible compounds. The diversity of chemical behaviors we found was surprising, and suggests this kind of small-molecule to functional-aggregate behavior is a common feature of organic chemistry, which may make the origin of life a more common phenomenon than previously thought," concludes co-author Niraja Bapat.