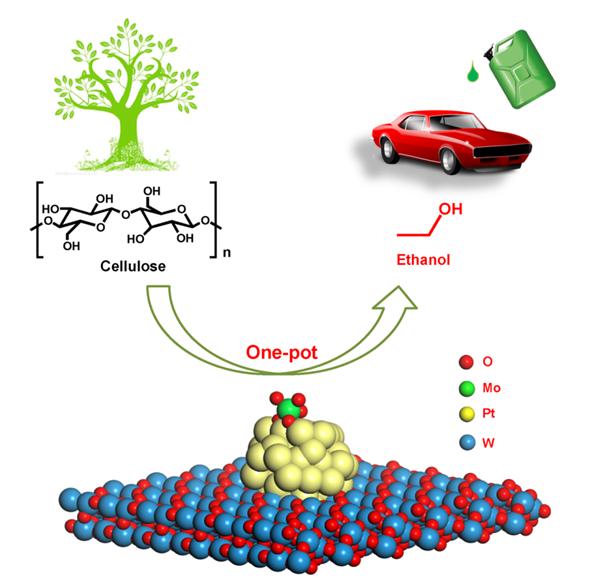 Scientists at the Dalian Institute of Chemical Physics (DICP) of the Chinese Academy of Sciences have developed a chemocatalytic approach to convert cellulose into ethanol in a one-pot process by using a multifunctional Mo/Pt/WOx catalyst. This approach opens up an alternative avenue for biofuel production. The findings were published in Joule.

Cellulosic ethanol is one of the most important biofuels, yet commercial production is hindered by the low efficiency and high cost of the bioconversion process.

Prof. WANG Aiqin, leader of the research group, and her colleagues developed a chemocatalytic process in which two separate reactions, cellulose conversion to ethylene glycol and ethylene glycol conversion to ethanol, were coupled in a one-pot reaction by using a multifunctional Mo/Pt/WOx catalyst, thus achieving an ethanol yield of higher than 40 %.

"With further improvement in catalyst efficiency and robustness, this one-pot chemocatalytic approach shows great potential in the practical production of cellulosic ethanol in the future," WANG said.