Sailing with nerves of glass

The constant hunger to break new records has turned boat building into a high-tech business. The racing yachts that compete at international regattas today are sporting machines designed to reach top speeds. The process of optimizing the boats has been ongoing for decades. However, just a short while ago it looked as if a limit had been reached. On the fifth leg of the Volvo Ocean Race in spring 2012, from New Zealand to Brazil, only one of the six teams reached its destination without technical problems – all the others were forced to either take a break from the race or give up altogether. The regatta became a war of attrition. And yet these yachts are the best in the world. "These boats are very well constructed," affirms Ian Walker, skipper of the Abu Dhabi Ocean Racing team. "I just think we put too much strain on them, and since they are so rigid and so light it's hard not to believe that they ultimately must break." So how do you build yachts that are faster than the wind and yet stable enough to withstand the harsh conditions on the high seas?

Back on course with sensor technology

A new sensor system from the Fraunhofer Institute for Telecommunications, Heinrich Hertz Institute HHI can help to detect weak points on time and warn yachtsmen when breaking point has been reached. Prof. Wolfgang Schade and his team in the Project Group for Fiber Optical Sensor Systems in the German town of Goslar have developed "nerves of glass" which can measure the forces that act on hulls, masts, and sails. The technology was actually developed for monitoring wind turbines, where rotor blades and cables are exposed to high loads. "With fiber optic sensors, we can detect delaminations and even cracks at any early stage – long before a part breaks or fails," explains Schade. "All you need is a fiber optic cable, in which dozens of sensors can be fitted." The centerpiece of the new technology is "fiber Bragg grating", microscopic structures that are integrated in the glass fiber at defined intervals and which alter the refractive index. Light racing through the glass fiber is reflected by these lattice points. The wavelength of the reflected light depends on the distance between the microscopic structures: every stretching or compression of the glass fiber alters the wavelength. To be able to measure the reflectance spectrum quickly and cheaply, the researchers developed a mini-spectrometer, which consists of a chip that splits light into various frequencies. By analyzing the frequency spectrum, experts can draw conclusions about the forces currently acting on the glass fiber.

The idea to use the measurement technology on sailboats came to Schade during a sailing voyage in the fall of 2010. "Sailing is all about making best use of the wind and being as fast as possible. At the same time, you also have to avoid pushing the equipment beyond breaking point. Fiber optic sensors can help to determine the forces acting on hulls, masts, and sails during the journey in real time." A few months later, Schade was able to demonstrate that the sensors were up to the task of advancing the sport of sailing. At the Düsseldorf boat fair he met Jens Nickel, who runs a sail workshop in Stade in northern Germany. In collaboration with the sailcloth manufacturer Dimension-Polyant, a web of glass fibers containing 45 measuring points was fitted to a mainsail and a genoa in Nickel's workshop. Measurements were then conducted on the sails on a test journey. "It turned out that the tension in the head, right at the top of the sail, was greater than assumed," says Nickel. "However, the strain on the clew, the lower aft corner of a sail, and on the entire leech area, the aft edge of a sail, was smaller than had been thought." Nickel's sail workshop used the data right away to optimize their working processes. The sailmaker started reinforcing the areas that were subject to greater stress and using lighter material in the areas that were less stressed.

Schade and his team's next objective is to adapt the measurement technology so it is fit for use in competitive racing. "We have now fitted sail battens with fiber optic sensors, which will help competitors in future to find the optimal trim, i.e. the sail position at which the boat travels the fastest under specific wind and wave conditions," explains Schade. For the first time, the fiber optic sensors and the connected measuring equipment – which is no bigger than a cigarette packet and contains an LED light source, spectrometer, and electronics – are supplying reproducible values. This data tells the crew in which areas there is too much or too little pressure, or how stresses shift to different areas, for example when the sheets are pulled in tighter. The results provided by the sensor technology will be accessible everywhere on board at all times – Schade's team has already developed an app that allows crew members to access real time data from their smart phones. The new measuring system will be launched shortly under the name NextSailSystem. 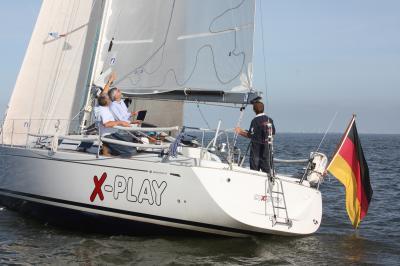 To measure the forces acting on the sail, researchers have fitted it with a web of glass fibers.