MBL, WOODS HOLE, MASS.--Exposure to arsenic in drinking water at the level the U.S. Environmental Protection Agency (EPA) currently deems as safe in the United States (10 parts per billion) induces adverse health outcomes in pregnant and lactating mice and their offspring, concludes a study led by Joshua Hamilton of the Marine Biological Laboratory (MBL) and Courtney Kozul-Horvath at Geisel School of Medicine at Dartmouth. The team is part of the Dartmouth Superfund Research Program on Toxic Metals.

Pregnant and/or breastfeeding mothers who consumed low levels (10 ppb) of arsenic in their drinking water, the scientists found, exhibited significant disruption in their lipid metabolism, leading to diminished nutrients in their blood and in their breast milk. As a result, their offspring showed significant growth and development deficits during the postnatal period before weaning. Birth outcomes such as litter size and length of gestation were unaffected.

"The pups were essentially malnourished; they were small and underdeveloped," Hamilton says. Once the pups were switched to milk from a mother who had not consumed arsenic, their growth deficits reversed, although only the males fully caught up with the pups that had had no arsenic exposure.

The U.S. EPA recently lowered the Maximum Contaminant Level for arsenic to 10 ppb in public water supplies—a regulated level that is considered "safe" for a lifetime of exposure—yet concentrations of 100 ppb and higher are commonly found in private, unregulated well water in regions where arsenic is geologically abundant, including upper New England (Massachusetts, New Hampshire, Maine), Florida, and large parts of the Upper Midwest, the Southwest, and the Rocky Mountains.

"This study raises a couple of issues. First, we have to think again about whether 10 ppb arsenic as a U.S. drinking water standard is safe and protective of human health," says Hamilton, who is the MBL's chief academic and scientific officer and a senior scientist in the MBL Bay Paul Center.

"Second, this study reiterates an emerging idea in toxicology that pregnant women and their offspring are uniquely sensitive to chemicals in their environment," Hamilton says. "There is a special window of vulnerability for both of them." Third, says Hamilton, "If you are on a private water system, particularly in a region with high arsenic, have your water tested so that you know what you are drinking."

The levels of arsenic and other regulated chemicals in public drinking water are published by water systems and readily available to consumers. In most states, the Department of Environmental Protection or its equivalent will also test an individual's sample of private well water for arsenic and other chemicals. If the concentration of arsenic is of concern, Hamilton says, the best options for private well owners are drinking bottled water or buying a remediation system, such as reverse osmosis, that will remove arsenic. Additional information and resources can be found on the Dartmouth Toxic Metals web site . 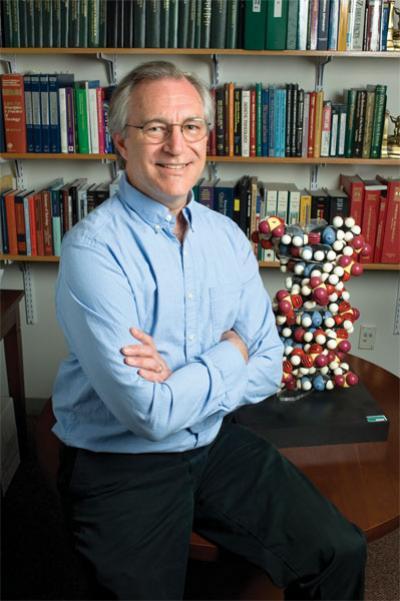 Joshua Hamilton is chief academic and scientific officer, and a senior scientist at the MBL in Woods Hole, Mass.

Based on this and prior studies (Environ. Hlth. Perspect. 2009), Hamilton and colleagues posit that exposure to low levels of arsenic may act as a predisposing factor, in which a second stress is needed to induce adverse health affects. In this study, pregnancy and lactation acted as that secondary stress. In the prior study, Hamilton's group demonstrated that arsenic suppressed immune function, leading to dramatically greater effects of a flu infection in mice.

Offspring are also uniquely sensitive to environmental chemicals because "they are developing rapidly. It's not hard for very low doses of a chemical to have big effects on a developing animal," Hamilton says.

In the current study, the mothers who were exposed to arsenic had significantly lower triglyceride concentrations in their serum and breast milk than normal, indicating the process of fat metabolism and storage in their bodies was compromised.

"Normally, the body is very good at storing fat and glucose for later use," Hamilton says. "Up to a certain point, if a mother is malnourished during and after pregnancy, the offspring will not be compromised, because her body uses nutrients it has stored to nourish the baby. Her body will basically 'eat itself' to provide for the baby." However, because this protective mechanism was disrupted in the arsenic-exposed mothers, they could provide less nutrients to their pups via breast milk.

The arsenic-exposed mothers also displayed a condition known as hepatic steatosis or "fatty liver," in which fat accumulates abnormally in the liver.

As early as day 10 after birth, the pups of arsenic-exposed mothers showed significant deficits in growth, as evidenced by body weight. At the typical time of weaning (21 days after birth), many of the arsenic-exposed offspring were so small that it was not feasible to separate them from their mothers.

"The message here is, 'Pay attention to your total arsenic exposure, both in drinking water and also in food.'" Hamilton says. "Pregnant women, especially, need to be very careful and protective of their health. Environmental chemicals such as arsenic, along with tobacco, alcohol, drugs—all of these chemicals are potential stressors to pregnant women and their offspring."

"The research conducted by Dr. Hamilton and Dr. Kozul-Horvath is an important component of our Superfund Research Program (SRP) at Dartmouth," says Bruce Stanton, Dartmouth SRP Director. "These significant results add to the body of knowledge we are developing pertaining to the sources of arsenic, its effects at the cellular level, the ways in which it affects the health of mammals like mice and ultimately, how it causes disease and harmful health outcomes for humans."